Home / News / The Civil Rights Movement Was Radical to Its Core 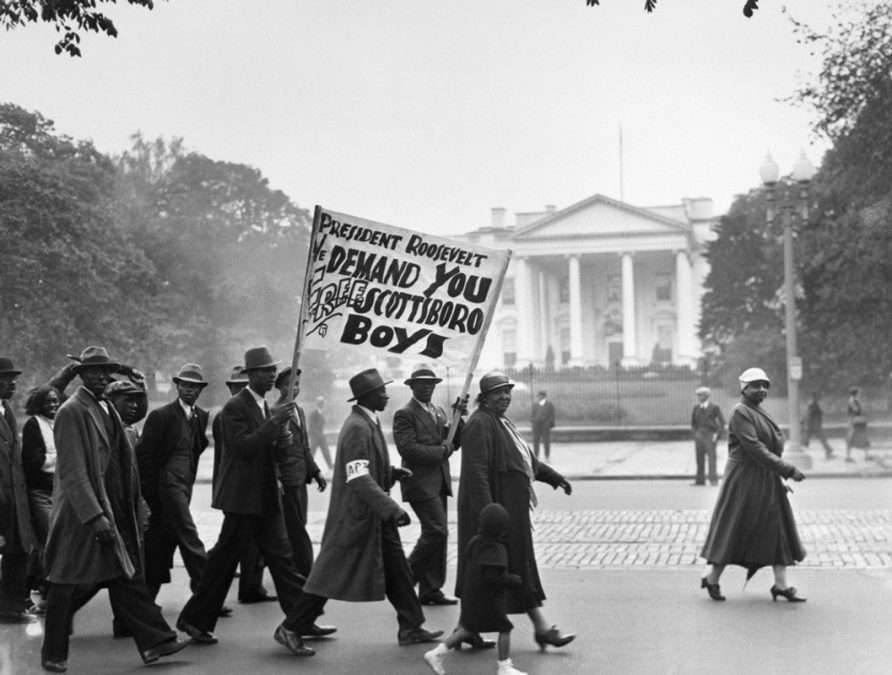 Today is the 59th anniversary of the March on Washington, so get ready for plenty of whitewashed history. Here’s the truth: the Civil Rights Movement was a radical struggle against Jim Crow tyranny whose early foot soldiers were Communists and labor militants.

Communists defend the Scottsboro Boys, accused of the rape of two white women and denied due process, in the early 1930s.

In Defying Dixie: The Radical Roots of Civil Rights, 1919–1950, historian Glenda Gilmore turns our attention to the decades before the “classic” Civil Rights Movement of the 1950s and 1960s. Her focus is on the Southerners — Pauli Murray, Lovett Fort-Whiteman, Harry Haywood, Junius Scales, and many others — who left the region to conduct the fight against Jim Crow segregation from beyond its borders. These figures were radicals of various stripes — Communists, Socialists, labor militants — and served as the leaders and foot soldiers of the struggle against racial and economic tyranny. Only “Cold War anti-Communism,” Gilmore asserts, was able to snuff out their singular contributions from the history books.

Gilmore’s narrative follows a path of struggle through Southern, American, and world histories that links together the Russian Revolution, the rise and fall of fascism, and the “long civil rights movement” in the United States. Lovett Fort-Whiteman, a Texas native and dedicated Communist, educated his comrades abroad about the “Negro Problem.” Fellow Communist Harry Haywood promoted his controversial “Black Belt thesis” — which held that black Americans in that part of the Deep South constituted a “nation within a nation” with the right to self-determination — before the Communist International in the late 1920s and early 1930s.

While such ideas were being debated within the Communist Party USA (CPUSA) and Comintern, Communists in the US South gradually found themselves on the front lines of a Southern Popular Front that included Socialists and Southern liberals who opposed Jim Crow segregation and what many saw as its international ally — fascism.

Communists took the lead. They defended the Scottsboro Boys in 1931 (nine young black men in Alabama who were flagrantly denied due process after being accused of raping two white women) and spearheaded the defense of Angelo Herndon in 1932 (a black Communist who was arrested in Atlanta, Georgia, while attempting to organize African American and white industrial workers). They were the most aggressive in organizing interracial labor unions. And they were crucial to labor-based civil rights organizations like the Southern Negro Youth Congress.

To many of these radicals, as New York Communist Ben Davis put it, communism was “20th Century Abolitionism” — and only an unflinching, militant, working-class movement could topple Jim Crow tyranny and economic oppression. “It was Communists,” Gilmore writes, “who stood up to say that black and white people should organize together, eat together, go to school together, and marry each other if they chose.”

The 1939 Hitler-Stalin pact crippled the Popular Front in the US, and the onset of the Cold War dealt a still more devastating setback. However, as interviews in Defying Dixie with older activists show, many refused to simply forget the flowering of radical organizing that laid the groundwork for the Montgomery Bus Boycott, the 1963 March on Washington, and other better-known events.

Historian Robert Greene spoke with Gilmore about Defying Dixie and the radical fight to create a better South, both in previous generations and today.

You and fellow historian Jacquelyn Dowd Hall have pushed for the idea of a “long Civil Rights Movement.” Why do you think this idea is important when thinking about the history of black freedom struggles in the United States?

Hall cochaired my dissertation committee, and she encouraged students to see history from the ground up, to explore power dynamics through labor history, and to accord agency and influence to those who pursued causes that some historians might see as lost. The existing historical literature named the period from roughly 1954 to 1966 the Civil Rights Movement, yet it was clear that African Americans had fought for rights since the Civil War. To discount those longer struggles casts the fight as arising spontaneously and limits its scope.

The century-long civil rights movement was always about more than eliminating segregation and getting voting rights, the two major accomplishments of the 1950s and 1960s. Looking at the Civil Rights Movement as short, successful, and led by male clerics, persuades Americans that the nation’s racial problems were shallow, and pious men easily settled them.

Perhaps most consequentially, limiting civil rights to that short period prevents us from understanding the pervasiveness of racial discrimination and the deep roots of racialized capitalism. Economic justice and structural change of the social and political system, long-standing goals of African Americans since Reconstruction, remain on the present agenda.

There is a strong undercurrent of transnational solidarity of left-wing movements throughout the book. But you start by talking about the global currents of white supremacy and fascism that also crossed borders in the 1920s and 1930s.

The Southern system of white supremacy that stood until the 1950s had many fascist elements, although, by 1940, most white Southerners would have denied the similarities. However, in the 1920s and 1930s, many of them embraced eugenics and routinely spoke of “white supremacy” as the natural order of things. Many supported the terrorism of the lynch mob.

At first, the global rise of fascism gave them an encouraging model, but by the mid-1930s it became a comparison to argue that the South’s system of racial oppression was more benign.

Your book makes clear that the labor and civil rights movements of the New Deal era were natural allies. Could you talk a bit about how the Gastonia Strike of 1929 in North Carolina and the Communist Party’s organizing in the South helped catalyze the movement for civil and human rights in the South?

The reason that labor and civil rights were natural allies is that white supremacy was, at its corem a system to control the black Southern labor force and simultaneously impoverish whites. Cotton mills claimed to offer protection for white working people — especially women and children — from the competition of cheap black labor. Since African Americans performed vital functions at a wage well below the poverty level, white southern capitalists could depress wages for whites by paying only slightly more for more skilled “white jobs” than for “black jobs.”

Segregation of workplaces kept the system in place by conferring a mythical status for whites. In Gastonia, the Loray Mill paid white workers notoriously low wages and a pittance to black workers who prepared the cotton outside the mill and worked in maintenance within it.

In 1928, the Communist Sixth World Congress in Moscow mandated that CPUSA organizers see “the South — the hotbed of reaction and race prejudice” as an opportunity. Their goal was to organize even “one or two” labor unions with white and black members. They sent white and black organizers to Gastonia, North Carolina, and succeeded in leading the workers out on strike.

Although the strike against Loray failed, in part through incredible police violence against the strikers, it served as an example for the CIO unions in the New Deal era.

Could you speak a bit about the organizing differences in these years between the Communists and Socialists versus the NAACP?

The biggest difference between the NAACP and the Communists and Socialists was in their goals and approaches to change. The NAACP worked incrementally and focused on anti-lynching activities and legal challenges to hold institutions to the “separate but equal” formulation of Plessy v. Ferguson.

The Communists and Socialists organized workers throughout the 1920s and 1930s, including sharecroppers, but also attracted a few radical intellectuals. They adopted a confrontational approach, advocated racial equality, and bravely put themselves in harm’s way for their causes.

Numerous times in the book, you write of “southern expatriates (who) returned to take their stand.” Why did you decide to make the stories of Defying Dixie about Southerners, black and white, who returned, at least in their minds, to the South to fight for labor, human, and civil rights?

What we euphemistically call the “Great Migration” of black southerners to the North most often resulted from the economic deprivation and persecution that they experienced in the South. They were most often refugees, not starry-eyed opportunists. As such, they had learned hard lessons about the South’s racialized capitalism, joined Northern unions when they could, and developed agendas for change that seemed radical to remaining Southerners, black and white.

Both white and black people who left also had more freedom to critique the South from afar. Despite moving, they remained Southerners at heart, and many were determined to change the South.

I wanted to include them in southern history, even though they were physically excluded from the South in their lifetimes. The South purged its dissenters and then historians excluded them from their characterization of it. The result is a skewed portrait of the region.

How much do you believe current attempts to build broad-based movements can draw from the history of the South in the twentieth century? Your chapter on the Southern Popular Front is illustrative, as it shows an ideologically broad movement struggling in the face of both global events (the signing of the Nazi-Soviet Nonaggression Pact in 1939) and local backlash. In other words, can something like the Southern Popular Front be built again?

I think that one reason the far right is so vociferous and visible is that they see the present as their last chance to impose their ideas. Ron DeSantis’s ridiculous campaign against “the woke” is an example of desperation as well.

The majority of urban southerners, black and white, already form an ideological constellation akin to the Popular Front. A 2018 study showed that 60 percent of Southerners approve of unions.

But gerrymandering gives rural white southerners undue power, electing state legislators who are collectively far to the right of the majorities in most states. They impose draconian social, political, and labor legislation. If the growing attacks on gerrymandering as unconstitutional succeed, the result will be a very different South.