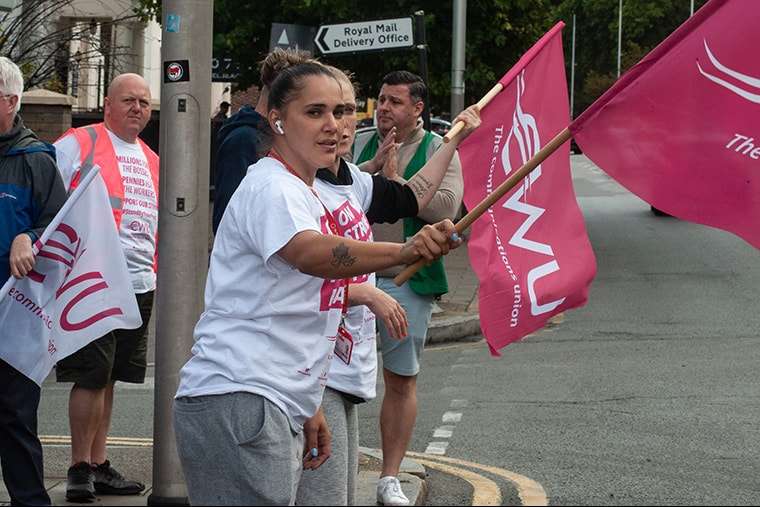 The pay fights are heating up in the CWU union as BT Group workers plan to step up their action, while bosses in Royal Mail announce a major assault on conditions (see below).

BT and Royal Mail workers—both represented by the CWU—have each been fighting to overturn huge pay cuts imposed by their bosses.

Now—after four previous days of strikes—CWU leaders have called new days of action for workers in BT. And, in an escalation, they say they will also be calling out 999 call handlers who were excluded from the previous strikes.

It means that workers in all six 999 call centres—all operated by BT—will strike with other BT and Openreach workers on 6, 10, 20 and 24 October.

Announcing the strikes, CWU president Karen Rose said, “Our members in those services, who are some of the lowest paid in BT, feel that they have been taken for granted, totally disrespected, and completely undervalued by the company.

“We’re not prepared to put them in a situation where they are exempted from the action that many of them were desperate to support because they feel they want to make a stand.”

General secretary Dave Ward added that the union also planned more activities than in previous strikes—including a “an event where we’ll be asking our members to gather at a certain strategic point” during one of the strike days.

“We’ll be asking people in the labour and trade union movement to support us on that day—we’re looking for a mass gathering,” he added.

Jas, a BT engineer, said he hoped a mass rally would boost the strike’s support and profile. “We need to get our message out loud and proud,” he told Socialist Worker. “It will be brilliant if we can get five, six, seven thousand people there.

“First and foremost it would cause a bit of havoc wherever we are, and it would highlight what’s going on.”

And Jonathan, a CWU rep and Openreach engineer, said a rally could also strengthen strikers’ resolve. “A lot of us are isolated. Engineers can spend the day working in their van and not see anyone. And if they’re not on the picket line, can spend the day not going to work and not seeing anyone,” he told Socialist Worker.

“So a big event can be a focal point for everyone to get together and give each other the motivation to see this through.” He added, “People have realised this dispute isn’t going to be a fly by night thing—we are in it for the long haul.

“An event like that and some camaraderie will give people a boost. It gets our union out and invites other unions to get behind us.”

Royal Mail bosses have announced a major assault on workers’ rights and union organisation, amid a bitter fight over pay and working conditions.

The company’s top executives told senior managers on Thursday morning of plans to stop negotiations with the union, and ditch the way reps have a say in the workplace. They also want to scrap years of agreements that underpin workers’ pay and conditions.

It comes against the backdrop of bosses’ attempts to force through major changes designed to turn Royal Mail into a parcels company similar to Amazon or DPD—with similarly bad working conditions.

The CWU also warns that bosses have secret plans to sell off the company to investment firm Vesa, with plans to break it up and run down its letters delivery services.

Bosses already want workers to accept a raft of attacks—including worse terms and conditions for new starters—in return for a pay increase above 2 percent. But they’re furious that workers’ strikes and organisation have stood in their way.

Royal Mail workers have already struck for three days over pay and are set to strike for two more days over conditions on Friday and Saturday next week.

“CWU reps in every unit across the country seek to negotiate daily over time levels, resourcing, leave—it’s just not normal in most companies,” he moaned.

“We also have a number of agreements that give the CWU power to delay trials and in some cases veto new initiatives. This power to veto, to block and delay is slowing down transformation. This is not the way that an agile and modern company should be operating.”

“The attack is to get rid of the union so they can attack the workers. That’s what speeding up means.”

In an emergency video message to union members on Thursday, CWU general secretary Dave Ward said, “These people are here to rip the heart out of your job, your terms and conditions.

“This is not about modernising the business. It’s about the future of them lining their pockets, lining the pockets of shareholders, and breaking up the company.”

He added “We will be escalating this dispute. We will be doing everything possible to put pressure on Royal Mail as well as escalating strike action. We are in this for the long haul and we absolutely mean that.”

CWU assistant secretary Davie Robertson said the union would announce details of more action early next week. Yet he also called for workers to have “cool heads” and said, in response to members’ questions, the union couldn’t call a work to rule without a legal ballot.

The bosses’ move—made even as they entered talks with union leaders on Thursday morning—shows they won’t back down in negotiations. It needs to be met with a plan for longer, harder hitting strikes.