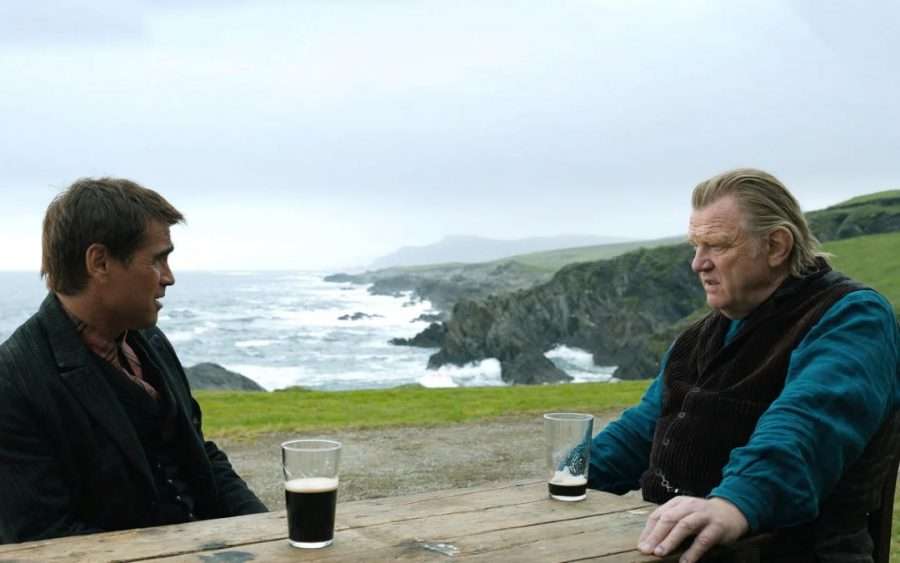 In Bruges’s director Martin McDonagh reunites with Colin Farrell and Brendan Gleeson for a story of an Irish friendship gone sour. And it’s easily the best new movie I’ve seen in forever.

Colin Farrell and Brendan Gleeson star in The Banshees of Inisherin. (Searchlight Pictures)

If you’ve been suffering for a long while, as I have, with the incredibly drab and derivative movies on offer, The Banshees of Inisherin is the one for you. This new film written and directed by Martin McDonagh reunites the lead actors Brendan Gleeson and Colin Farrell from McDonagh’s beloved 2008 film, In Bruges, and the results are darkly hilarious and tragic and shocking and engrossing and poignant and all the good things you keep hoping for.

This unique tale is about the tiny rural Irish community living on a remote (and fictional) island of Inisherin, which is mostly able to ignore the 1920s civil war raging on the mainland, except for the sounds of distant explosions. But a personal civil war opens up when two old friends suddenly become estranged. One day, Colm Doherty (Brendan Gleeson) says impassively to Pádraic Súilleabháin (Colin Farrell), “I just don’t like you anymore.” Pádraic’s desperate attempts to win his friend back and Colm’s brutal tactics in forcing an end to the friendship create increasingly devastating ripples of reaction through the community.

It seems that the problem is, in Colm’s view, that Pádraic is limited and “dull.” Colm is getting on in life, and has begun to compose music in hopes of leaving some sort of lasting legacy, however small, instead of spending his days sitting in the pub with Pádraic, listening to him natter on.

Colm accuses Pádraic of having once talked for two solid hours about what came out in the feces produced by his beloved miniature donkey, Jenny. “I timed it,” says Colm grimly.

Pádraic’s rejoinder is, “It wasn’t my donkey, it was my pony, which just shows how much you were listening.”

Pádraic, who loves his animals and treats them as family, keeping them in the house over the objections of his dear, peppery sister Siobhán (Kerry Condon), insists that his friendship is worthy because “I’m nice.” Everyone on the island agrees that Pádraic is “one of the nice ones,” but Colm rejects the importance of this, asking how many people from the seventeenth century were remembered for being nice. No one! But Mozart, on the other hand, he was remembered by everybody.

“Not by me, so there goes that argument,” says Pádraic.

And Siobhán — who’s known to read a lot — takes the wind out of Colm’s sails a bit by telling him that Mozart lived in the eighteenth century actually.

With Colm’s rejection eating away at him, Pádraic begins to suffer intensely from the idea that maybe he really is a “dull” person. Though not the “dullest” person on the island — that’s Dominic Kearney (Barry Keoghan), a mentally afflicted, woman-obsessed young man living with his despicably abusive policeman father (Gary Lydon). He becomes Padraic’s only friend after Colm drops him and tries to offer helpful advice.

Keoghan, a much-admired Irish actor, is so good as Dominic that even in a cast of great performers working at the highest level, he stands out. The scene in which he haltingly offers his love to Siobhán, knowing he’s going to be rejected, is guaranteed to break your heart. It’s impeccable, the effortless way he tosses off the last line: “Well, there’s that dream gone.”

What a fantastic ensemble! I should note that Gleeson is as magnificent as always and so physically imposing that when he knocks down Dominic’s vicious father, a considerably younger man, you don’t doubt at all that he could do it. He also demonstrates his great musical gifts, doing all his own fiddle playing. (It’s a quiet film overall, but the score by Carter Burwell is nevertheless thematically and tonally very important.)

Farrell just keeps getting better with age, and his black eyebrows are now so upside-down arched, they look as exaggerated as the eyebrows in the “tragedy” theater mask and augment every expression, making him sadder or funnier, depending on the moment. Condon is so spiky and lovable as Siobhán, she needs to be moving up the ladder and competing for some of Olivia Colman’s roles.

The film gets steadily bleaker as humor drains away and both intended and unintended consequences start amassing. More and more hard-faced and vengeful as his “nice” nature sours, Pádraic says, “There are some things you don’t get over.”

Look out for the bloody self-mutilations, that’s all I’ll say!

The parallel between these developments in the little community and the civil war raging on the mainland, with the Irish fighting each other ever more implacably instead of uniting against the English, is fortunately not overstressed. If you’re an American living amid highways and strip malls and general hideousness, the film’s harsh view of traditional Irish society can be hard to wrap your mind around at first — it all just looks so beautiful. The rocky green hills, the rutted country roads connecting the wonderfully isolated old houses, the friendly pubs, the wild sea beyond. And animals — animals everywhere!

But then again, there are the banshees to contend with. Colm says that in modern times, banshees no longer shriek through the night as supernatural heralds of death. They just live among ordinary people, sneaky and morbid, watching terrible things happening and smiling.

The most obvious representative banshee is Mrs McCormick, a grim old woman much preoccupied by doom and disaster who wanders around in a black cloak. Siobhán has been known to “duck behind walls” to avoid her. Her predictions about likely deaths resulting from the Colm-Pádraic fallout take on increasingly sinister tones — especially the one terrifying shot of her waving to Siobhán across the water that seems to reveal the old-time banshee within her modern disguise.

In short, it’s a brilliant movie. Go see it!