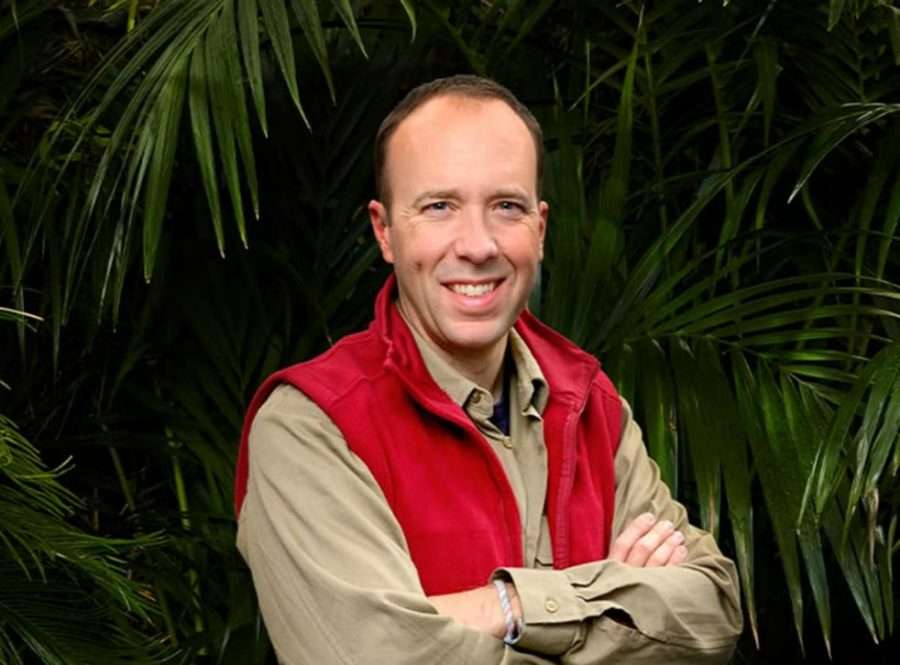 Matt Hancock thinks his stint surviving in the jungle is a ‘good metaphor’ for politics. He’s right – but only because his risk of meeting serious harm in I’m a Celebrity is about as high as his risk of facing serious consequences for his Covid crimes.

Questioned by the other contestants about his decision on arrival in last night’s episode, Hancock said it was about showing the public that politicians are human, too. (ITV)

Matt Hancock is in the jungle. After entering politics as an economic advisor to austerian-in-chief George Osborne, overseeing the deaths of perhaps 180,000 people as Covid health secretary, and then being sacked for ‘breaching social distancing guidelines’ during an affair with a colleague; after the fake tears and the botched PPE provision and the crony deals with the neighbour, the MP for West Suffolk has decided that the best way to get back into the public’s good books is to let them make him eat a kangaroo’s ball.

It seems clear enough why he’s chosen this path. Other politicians have made similar trade-offs in the past, weighing up the approach of someone like Keir Starmer, whose chronic beigeness would never let him get caught on camera crawling through insects or hanging off a zipwire, against the ‘banter’ line taken by an entertainer like Boris Johnson. For Johnson, it worked—and since Hancock is already a joke, he seems to be attempting to make himself Boris’s comic heir, a transition to be beamed quickfire to the nation’s living rooms over the next two weeks.

It’s possible he’s judged it very well. His name will be a relentless fixture of the entertainment pages for the next fortnight, for a start, and although the wounds of Covid are still raw across the country, in the absence of any proper accountability, watching the man trip over the bridge into camp and have maggots poured on his head last night felt almost—almost—cathartic. But it’s a feeling those who lost loved ones and cared for the sick during the pandemic probably wouldn’t share.

Of course, redemption via clowning isn’t the explanation he gives. Questioned by the other contestants about his decision on arrival in last night’s episode, Hancock said it was about showing the public that politicians are human, too—about taking off the tie and breaking down the divide. His campmates weren’t convinced; broadcaster Charlene White pointed out that politicians always use that kind of line, and rugby player Mike Tindall went for something more concise: ‘Bullshit, bullshit, bullshit.’

Bullshit is right, but it’s a type of bullshit that’s increasingly commonplace. MPs current and former have registered prime-time’s capacity to turning at best unknown and at worst hated figures back into smiling faces and historical blank slates. Ed Balls and Ann Widdecombe on Strictly, Alastair Campbell’s Winter Walks, a growing string of podcasts and chat shows—light entertainment has a lot to pay for when it comes to political reputation laundering.

And it’s a mutual process. The leak of light entertainment into the political sphere is taking place at the same time as a concerted effort to turn politics into light entertainment. Access journalism elevates a media set far more interested in—or at least prepared to report on—court drama than the effects of political decisions on normal lives, so it’s no surprise growing numbers of the public see politics as a dull soap opera that never changes anything real. Most of the time they’re right to think that; the benefit, for the corporate press and the political class, lies in letting people believe that’s inherent to what politics is, rather than a conscious choice made by the people who do it.

Then there are the particular parallels between politics and reality TV. In his introduction, teased at the end of Tuesday night’s episode ahead of his arrival in camp, Hancock said he thought ‘surviving in the jungle’ was a ‘good metaphor’ for political survival. He’s right, but not for the reasons he thinks he is.

He’s right because the whole thing is confected, including the stakes for those involved. With the snakes and the spiders and the ‘tentacles of terror’, shows like I’m a Celeb live off the implication of risk, but we’re all in on the joke: the list of its ‘most gruesome injuries’ published by the Mirror last year included a sprained ankle and a chipped tooth, the kinds of things many of us will have suffered on a big Saturday night. In 2005, when Neighbours actor Kimberley Davis jumped from a helicopter as part of a Bushtucker Trial and fractured a rib, she wasn’t left to see out her suffering in the wilderness—she was airlifted to hospital.

It’s safe; there’s a whole team of people behind the cameras committed to keeping it that way. And in reality TV, that’s the way it should be; you don’t turn on I’m a Celeb expecting to actually witness the death-by-snakebite of a Hollyoaks star. If people started regularly losing limbs, they wouldn’t make the show.

But Hancock’s political ‘jungle’ is confected, too. For a start, our system operates on the basis that we elect people to speak for our interests, and that those people are accountable to us if they don’t. In reality we elect people who often represent their corporate donors’ interests and who regularly get away with their falsehoods and fatal screw-ups—and in the moments they don’t, book deals, the lecture circuit, lobbying jobs, or simple personal wealth are there to airlift them out. The stakes are high—austerity alone has been linked to 330,000 excess deaths—but they apply to you, the viewer.

And, again, we know it. We’re so accustomed to politicians standing up and talking about working people’s needs and then acting against them that it no longer really registers they’re lying. Those on the parallel frontbenches play-act antipathy, but with Sunak and Starmer in charge there’s little space between them, and no one makes the kind of bovine vowel sounds that form the ambient backdrop to Prime Minister’s Questions each week when they’re moved by genuine emotion. That was what made Mark Drakeford’s righteous anger in the Senedd last month, in response to a question about the NHS from Welsh Tory leader Andrew RT Davis, so affecting to watch—because even as we shift into what could be a lethal winter for thousands, expressions of true feeling in politics seem rare.

I say rare, because it’s not unheard of. People do, of course, get voted out of seats and sacked from their cabinet jobs, and there are people in politics who recognise what their workplace represents and try hard to change it into something better functioning. But they’re the exception, not the rule; for more, the parameters of reality TV feasibility again apply. Talk up ‘the jungle’, but if accountability in parliament and the press, not to mention in law, actually existed the way it’s supposed to, we wouldn’t do politics like this.

Those in power would probably argue with the comparison. Matt Hancock did, after all, have the Tory whip suspended ahead of his arrival in the jungle; given Parliament is currently sitting, Rishi Sunak pointed out that he should be focused on representing the interests of his constituents, not eating possum tail. But Sunak’s real problem is that the crossover risks taking a hammer to our mutually constructed mirage, showing up that a chamber of ‘commons’ in a palace filled with people who earn three times the median salary and are four times more likely to have gone to private school than the rest of the electorate is just as fake as the Big Brother house.

My view? If Matt Hancock really wants to know what it’s like to survive in a jungle, let him do a shift as a nurse in A&E on a Saturday night or spend this winter trying to keep three kids fed and warm on minimum wage. If it has to involve sewage and rodents, let him live in some of the housing association homes campaigner Kwajo Tweneboa has exposed. But if he must play-act, fine: let it be as a jungle explorer rather than a genuinely well-meaning representative of the people. He’ll do less damage in there than out here.