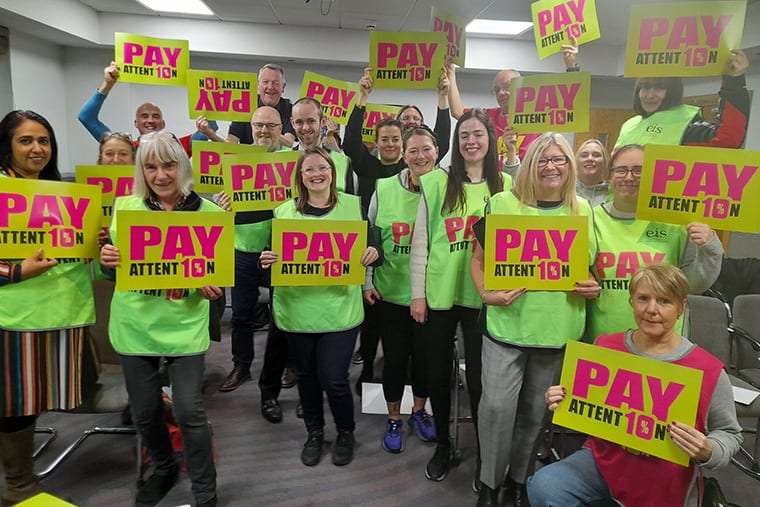 Glasgow teachers in the EIS union show they want to fight for a 10 percent rise (Picture: @EISGlasgow on Twitter)

Teachers in the EIS union in Scotland have voted massively for strikes over pay. The ballot result which was announced on Thursday showed a 96 percent vote for strikes on a very high 71 percent turnout.

The union is demanding a 10 percent pay rise—still less than the present rate of inflation. It points out that between April 2008 and April 2022 teachers’ pay has gone up by 29.9 percent but the RPI index has gone up 56.4 percent. This means that teachers’ pay has fallen in “real terms” by 26.5 percent.

EIS general secretary Andrea Bradley said, “This ballot result provides the EIS with an extremely strong mandate for strikes over pay. Our members have sent yet another very clear message to their employers in Scottish local authorities and to the Scottish Government that they must do better on teachers’ pay.

The last offer from the Cosla local authorities’ body and the Scottish government was for a 5 percent rise.

A special meeting of the EIS executive committee on Thursday afternoon agreed to call its members in schools out on strike on Thursday 24 November. This is when Royal Mail workers and university workers are set to strike.

It would be the first such national action in Scotland’s schools for four decades. Further strikes were set to be agreed at another meeting of the EIS executive on Friday.

All the mainstream political forces are betraying Scottish teachers. Education secretary Shirley-Anne Somerville from the SNP said after the strike vote that the Scottish government recognised “the vital importance of reaching a fair and affordable resolution on pay”. But that same government has refused any improved offer.

In a stunning piece of hypocrisy, the Scottish Tories’ education spokesperson Stephen Kerr claimed to have sympathy with teachers, saying, “The education secretary failed to get round the table and ensure a solution was found”. Meanwhile, the Tory government in Westminster is trying to break strikes and hold down pay.

Scottish Labour’s education spokesperson Michael Marra couldn’t bring himself to back the strike vote., Instead, he just attacked “years of SNP mismanagement and neglect” while carefully not putting forward an alternative on pay.

Building 24 November and quickly escalating action is the way to take the smile off all the politicians’ faces.