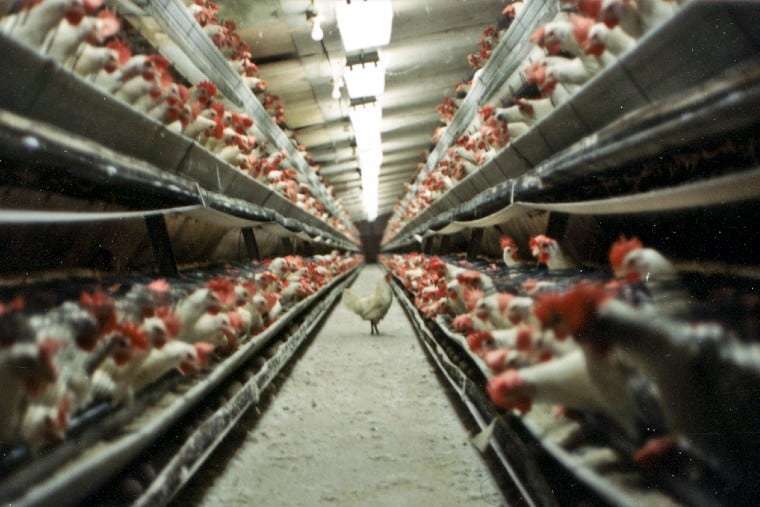 Intensive farms are the best place for diseases like bird flu to spread (Picture: Farm Sanctuary)

Floating in the grey sludge among the plastic bottles and crisp packets at the water’s edge in Ferry Meadows is yet another dead swan. So many birds there have now died that the local paper has lost count.  This grim picture of dying wildlife is from Peterborough, but it could be from anywhere in Britain or almost any part of the world for that matter.

The rotting animals are yet another symbol of the way capitalism’s insatiable demand for profit is putting all life on the planet at risk. The killer is bird flu—classified by scientists as HPAI A (H5N1)—a highly transmissible disease spreading ­rapidly among wild birds and into those reared for food.

It is so contagious that a single infected bird is likely to spread the virus to as many as 100 others. Already tens of millions of birds worldwide have had to be culled after contact with the disease, wiping out entire poultry farms and ­threatening winter shortages of meat and eggs. One poultry farmer in Norfolk said an infection last month destroyed his entire flock and closed his farm.

About 5,000 birds died in the two days between his discovery of the infection and the arrival of culling teams.  The remaining 8,500 turkeys and geese were destroyed. Health scientists are quick to reassure us that “zoonotic” transmission of H5N1 from birds to humans is rare, and from human to human more unlikely still.

But professor Devi Sridhar says that in the wake of Covid, we cannot afford to be complacent. “This is a ticking ­timebomb,” she says. “A mutation that makes this virus circulate more easily between humans is possible. “This would be a gamechanger and raise the risk to humans considerably. And the more chances the virus has to jump into a human  and mutate, the more likely it is a dangerous strain will emerge.”

So far only small numbers of humans have been infected. Most of those who have been infected were usually farm workers and others that have handled dead or dying birds.  Last week two farm workers from Spain tested positive—the second known human infections in Europe since 2003. The first was in Britain. But Sridhar points out that the H5N1 infection in humans isn’t mild, with a fatality rate of about 60 percent. “We currently have no vaccine to use in humans—nor does the seasonal flu vaccine work against avian flu.”

Sridhar is backed by Ian Barr, deputy director of the World Health Organisation. “Occasional infections are not an issue. It’s the gradual ­gaining of function of these viruses” that is the real issue, he says. Despite global advances in medical care, the number of infectious diseases has risen rapidly in the past four decades, and most have non-human origins.

Since 1940, an estimated 50 percent of all new diseases are estimated to be associated with agricultural production. The warnings of future pandemics will ring familiar to those who read the late Mike Davis’s 2005 book, The Monster at Our Door—The Global Threat of Avian Flu.

In devastating detail, he charted the first global H5N1 outbreak in 2003 that began in the huge poultry farms of East Asia. The strain began in Asia in around 1996 and spread in poultry ­throughout Europe and Africa in the early 2000s. Since then it has repeatedly infected wild birds.

Davis, a Marxist activist and scholar, showed how multimillion-pound poultry businesses first denied and then covered up disease, even as it spread to their employees. In country after country, the state ­protected them. While focused on H5N1, he makes clear the wider danger of disease transmission from animals to humans— and the way human activity leads to new virus ­breeding grounds with pandemic possibilities.

“Third World urbanisation and the livestock revolution have fundamentally ­transformed influenza ecology and accelerated the evolution of recombinants,” he wrote. His two-fold argument is that human encroachment into previously wild and uncultivated land means there are now far more opportunities for contact between different species of animals— including humans.

And that means a greater chance of dangerous mutations that threaten humanity. Viruses that for thousands of years have laid dormant in wild animals can now more easily transmit to livestock that are more vulnerable. Because of the proximity of farmed animals to humans in many parts of the world, zoonotic transmission is now much more likely.

The second part of Davis’s argument is about the way ­capitalism produces vast inequalities and slum living conditions for more than a billion people. These are guaranteed to spread the resulting diseases. “Forest destruction, whether by multinationals or desperate subsistence farmers, eliminates the barrier between human populations and the reclusive wild viruses endemic to  birds, bats, and mammals,” he wrote.

“Factory farms and giant feedlots act as huge incubators of novel viruses  while appalling sanitary conditions in slums ­produce populations that are both densely packed and immune-compromised.”

That intensive farming and slum conditions are linked is further emphasised by the similarities between them, he said.  A big part of the new threat of disease has been the development of factory farms. They are an industrialised system of rearing livestock by concentrated methods.

The aim is to maximise production while minimising costs—and thereby make huge profits. As a method of production, they depend on scale, and what is called “vertical integration”. That means giant ­agri-businesses own and control every part of the operation— from the rearing and feeding, to the slaughtering of animals and their distribution as food.

In order for these huge enterprises to thrive, small-scale ­farming must be wiped out and competitors incorporated. Every activity must be subordinated to profit. That’s why factory farms are geared exclusively toward rapid weight gain. And because mass is money, animals such as pigs and chickens are raised indoors in sheds. Each animal has less than twice the space that their bodies occupy.

The environment creates psychological and physical stress that weakens the animals’ immune systems and allows natural waste and potential infections to spread everywhere. The farming sheds are the perfect incubators of disease.

Farmers know this is true.So in most parts of the world they pump animals reared in this way full of growth-promoting antibiotics that also guard against disease. Using antibiotics in this way only makes more dangerous the growing phenomenon of resistant germs.

That in turn means the drugs we would rely on to treat secondary lung infections common in severe flu are less likely to work. The factory farming method of food production, pioneered in the West, is now exported all over the world.  It is even marketed as an “ecological” alternative to deforestation, because it uses less land than more traditional, free-range rearing methods.

International lenders advise that shifting from beef farming to chicken production is good for profits and the environment. With this kind of ­encouragement, Ethiopia started plans to shift 30 percent of its beef production to poultry in 2021. The government there insisted this was part of its commitment to minimising climate change.

At best, this only temporarily trades off one kind of health and environmental danger against another. In the short term, the move from large cattle farms with free moving animals may mean less encroachment into the wilderness.  But in the longer term, it will likely see the huge expansion of factory farming that presents its own specific dangers to the people and planet.

Capitalism offers just two options for feeding the planet.  Either tear down the rainforests, replace them with farming land and risk new diseases.  Or, rear animals for food in conditions that spread those diseases and make both them and us sick.

That is surely a damning indictment of the system.