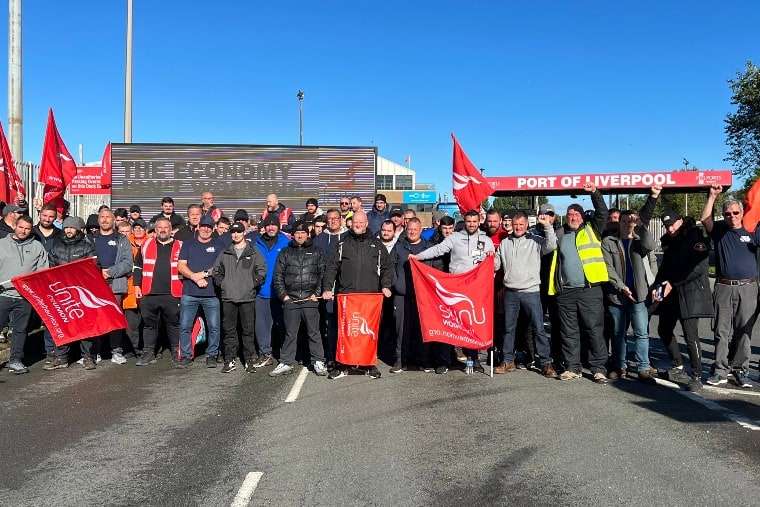 One of the mass pickets during the Liverpool dockers’ strike (Picture: Unite North West)

Liverpool dockers have won a pay rise after five solid weeks of strikes. Around 600 port operatives on Thursday night voted by 98 percent in favour of a pay deal of 14.3 to 18.5 percent, depending on skill set.

They were first offered a 5 percent pay increase by bosses at Peel Ports. The deal is made up of a 9 percent basic pay rise and changes to overtime, working patterns and pay grades as part of last year’s pay deal. All pay rises will be backdated to June.

“We’re well organised with 99 percent membership and not one person crossed the picket line. That’s impacted the company.”

To make ends meet, the dockers have been forced to work up to 70 hours. But Steven said workers now “won’t be chasing our tails to do 55 or 60 hours a week.” And if they do work overtime, the rate’s gone up.

The redundancies announced during the strike are also off the table for now. “Any redundancies will be on a voluntary basis on a criteria agreed with the union,” said John. “Any compulsory redundancies we’ll be balloting again.”

“Our members backed us,” John said. “Our pickets were manned for 24 hours. We’re elected reps—we’re only the spokesperson. The power was in the membership.”

Steven said the morale on Friday morning was “brilliant”. “It’s taken a lot of pressure off. Leading up to Christmas people had started to get worried. But now we’re also getting back pay—that’s around £1,500 guaranteed before Christmas.

“All the lads and girls deserve it. This place was at a complete standstill. Nothing was moving and that is massive credit to all our members—their pressure is what created the deal we got.”

The company wants to start talks for future pay deals. “We’ve shown we’re not to be messed with,” Steven said. “It didn’t look like it was going our way for a long time. Now we have this and that’s down to the workforce being solid.”

Around 70 engineers also struck and won a 9 percent pay increase backdated to June, with redundancies removed for now. Some 74 percent voted in favour of the deal.

Originally the engineers were offered 7 percent, then with an additional one-off payment thrown in. “We’re quite happy,” rep Phil Clarke told Socialist Worker. “And we have learnt lessons from this, so we’re better next time.

“In some ways the strike has brought us all together. But there are things we could do differently to make sure we’re better coordinated. If we’ve taught the company anything it’s that if they push us enough we will withdraw our labour. We’ve threatened action but never done it before.

“I also think if Felixstowe dockers had supported our dispute and we’d been more joined up, we’d have had more impact. That also needs to be looked at.”

Peel Ports grabbed £141 million in profit last year and made profits during the pandemic. Yet it pumped out lies that the average docker earned £43,000 and that they rejected deals worth higher than they were.

“Peel also owns Media City in Manchester,” John added. “So it was lie after lie in the news. We weren’t getting heard when we were trying to get the true story out.”

But Steven says the strikers “turned public opinion around” and received international support. “People realised we’re not greedy but normal working class people fed up with being treated like shit.

“Each day we had people coming—celebrities, union leaders and MPs. If anyone was feeling a bit down the show of support would pick everyone back up again.

“We said we’re not having this anymore and hopefully it inspires others to do the same. We’re going to get out in the next few months and support others—strikers in Jacob’s, nurses and RMT workers.”

John added, “Our message is we’ve done it once and we’ll do it again. Don’t come back with a low offer—take us seriously and give us what we deserve.”

Unite national leaders will bask in this victory, but it was the pressure from below that was crucial.

The deal was, rightly, debated and voted on at a mass meeting. It ought to be as easy to start a strike as it is to finish one, but of course it isn’t under the anti-union laws.

There are important general lessons from the dockers’ success. The union says it was its “strategic tactics” and “strikes plus” that played an important role, as well as the walkouts. But it was the power of the strikes that forced Peel Ports to make concessions.

And the dockers did not confine themselves to striking for just one or two days every month, Instead they began their action on 19 September with a two-week strike and have been prepared to escalate. Other workers—including those involved in national strikes—should learn from this.

Workers were involved through mass picketing round the clock. This gave lots of opportunities for discussion, dealing with hesitations and problems, and making sure the reps knew what the rank and file felt.

And at least some other ports delivered solidarity by refusing to handle ships diverted from Liverpool. This is against the anti-union laws, but nobody was taken to court. Solidarity won out.