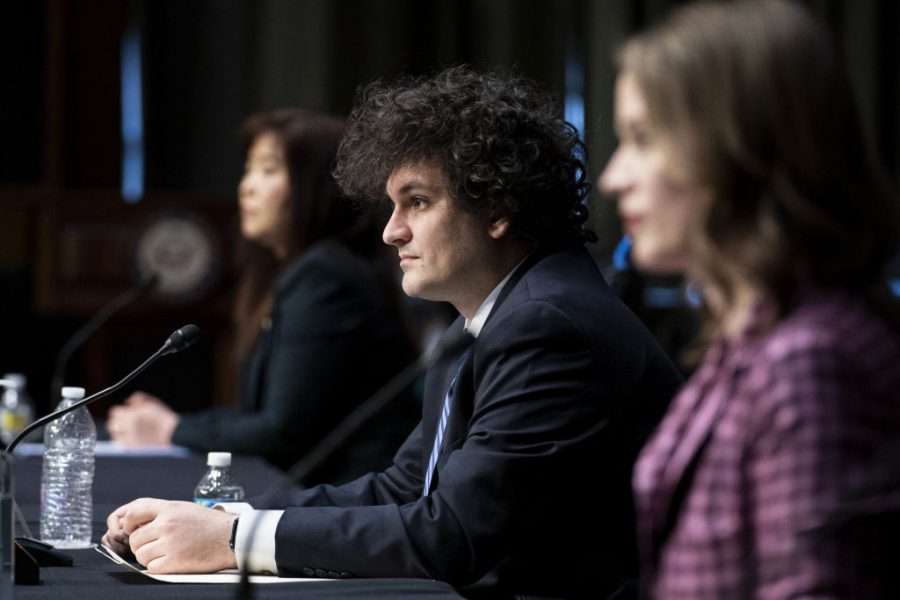 In April, when cryptocurrency guru and Democratic mega-donor Sam Bankman-Fried described how crypto tokens work on a Bloomberg podcast, the host remarked that it sounded a lot like being “in the Ponzi business.” Bankman-Fried, founder of the FTX cryptocurrency exchange, replied that this was “a pretty reasonable response” with a “depressing amount of validity.”

The conversation — which occurred days after one of the industry’s top regulators in Washington tweeted a picture with Bankman-Fried — probably should have set off blaring alarm bells throughout Washington, DC, and the financial industry. It didn’t.

On Friday, FTX, which previously had $16 billion in customer assets, and was valued at $32 billion in its most recent investor funding round in September, filed for bankruptcy in Delaware. Thirty-year-old Bankman-Fried resigned as its CEO.

The collapse underscores how the $849-billion crypto industry — down by one fifth in the last week and from a high of $3 trillion a year ago — has been protected by regulators who are asleep at the wheel, while hapless ordinary investors, suckered in with slick ads from prominent celebrities and athletes, lose their savings.

According to an industry publication, Clinton suggested that regulators should adopt a “do no harm” mentality when dealing with cryptocurrencies. Politico announced that the event heralded the crypto industry’s “strange new respectability.”

At the time, Bankman-Fried was fashioning himself as a political kingmaker, boosting crypto-friendly candidates in a series of Democratic congressional primaries, and getting advice from veteran Democratic consultants and younger, quasi-left upstarts. In May, Bankman-Fried told NBC News he aimed to spend up to $1 billion on the 2024 elections.

Now, just six months later, FTX has fully collapsed. According to the Wall Street Journal, FTX had “lent billions of dollars worth of customer assets to fund risky bets by its affiliated trading firm, Alameda Research, setting the stage for the exchange’s implosion.”

The downfall was swift: when Binance, a competitor crypto exchange, announced on November 6 that it was unloading its holdings of digital tokens issued by FTX and in which Alameda was heavily invested, customers began pulling their money from the tokens and FTX. Bankman-Fried announced on November 8 that Binance was acquiring FTX, pending due diligence, before Binance pulled out of the deal. Soon, FTX was out of money.

Lawmakers on Capitol Hill are now raising the prospect of a new regulatory push around crypto, though larger questions still remain: How have regulators allowed the crypto industry to operate with so little scrutiny for so long? Why did the political and consulting class accept and even court Bankman-Fried’s intrusion into Democratic Party politics, even after he effectively admitted the scam?

From a Complete Unknown to Political Player

Bankman-Fried, the scion of tenured Stanford law professors, entered the crypto space in 2017 with the founding of his firm Alameda Research. His initial trades focused on exploiting the price difference between Bitcoin in the United States and in Japan.

Cryptocurrencies, broadly speaking, are decentralized digital forms of money. Bitcoin is the most successful and best-known crypto, but there are thousands of others. One in five American adults own some form of crypto, according to a January Morning Consult poll.

Bankman-Fried, who was at one time worth a reported $26 billion, made his presence known in the political world in 2020 when he donated $5 million to a super PAC supporting Joe Biden’s presidential campaign. That donation earned him a fluffy profile in New York magazine headlined, “The Mysterious Cryptocurrency Magnate Who Became One of Biden’s Biggest Donors.”

Bankman-Fried began by bankrolling a super PAC, called Protect Our Future, that intervened in Democratic primaries. While the group’s $10 million ad blitz designed to crown a virtually unknown candidate, Carrick Flynn, in an Oregon primary failed, its other spending was highly effective.

Protect Our Future spent $1 million to help reelect Democratic Ohio representative Shontel Brown, who was facing a competitive primary challenge from progressive Nina Turner. Brown has key committee assignments: She sits on both the House Agriculture Committee — which oversees the Commodities Future Trading Commission, one of the primary regulators for the crypto industry — and the Oversight Subcommittee on Economic and Consumer Policy, whose chair is investigating crypto.

Along the way, Bankman-Fried developed ties with heavy hitters in the Democratic consulting world, as well as younger, party-aligned operatives who are generally perceived as progressive but spend much of their time attacking left-wing policy proposals in the press.

Sean McElwee, the founding executive director of the polling outfit Data for Progress, has reportedly advised Bankman-Fried. Data for Progress received $48,000 from Protect Our Future in June. Bankman-Fried, McElwee, and data bro David Shor jointly hosted a fundraiser for Democratic New York representative Ritchie Torres this spring, according to The Intercept.

Representative Sean Casten, a Democrat from Illinois, employed Bankman-Fried’s brother and consigliere Gabe as an aide from 2019 to 2021. Casten later became a member of the “Digital Assets Working Group” of Democrats on the House Financial Services Committee, which was focused on crypto. Casten did not immediately respond to a request for comment from the Lever.

Crypto Tries to Pick Its Regulator

As Bankman-Fried attempted to flex his muscles in the electoral arena, he also became a regular presence on Capitol Hill, ostensibly helping lead the charge for regulation of his nascent industry.

Lummis previously touted a statement from ADAM on her website promoting the legislation. That webpage has since been deleted. ADAM’s own website used to list FTX general counsel Ryne Miller as part of the organization’s board of directors; his name has now been removed.

Bankman-Fried combined his behind-the-scenes lobbying — both through ADAM and his own firm, which has spent $670,000 lobbying this year — with a public-facing critique about how crypto really needs to be regulated.

“[The US should] be able to strike a balance between fostering economic growth and providing consumer protection and protecting against systemic risk and financial crimes,” Bankman-Fried said in a February interview with the Economic Club of New York.

Bankman-Fried’s remarks to New York’s elites came as SEC chairman Gary Gensler began taking a tougher posture toward crypto. Gensler warned last year that most trading platforms would need to register with the agency, and that the SEC was nearly doubling the size of its special unit policing crypto.

As such, the industry began seeking to shunt regulatory supervision to the CFTC. A relatively marginal agency originally tasked with overseeing agricultural futures contracts, the CFTC has neither the resources nor the mandate of the SEC.

The fact that the CFTC was handed oversight — in the wake of the 2008 financial crisis — of the sprawling US derivatives market is already referred to by advocates as the “Achilles heel” of Dodd-Frank financial reform.

In November 2021, FTX kicked off a full-court press to pick its preferred regulator by hiring former CFTC commissioner Mark Wetjen as its head of “policy and regulation.” FTX’s general counsel, Miller, is a former attorney for the CFTC.

Bankman-Fried discussed his push for crypto regulatory clarity in the same April podcast where he suggested that the crypto tokens traded on his platform are effectively a Ponzi scheme.

He told host Joe Weisenthal and pro-crypto Bloomberg Opinion columnist Matt Levine that “the thing that makes me the [most] bullish about crypto asset pricing is just the amount of money that isn’t able to access it today.” Bankman-Fried was referring to the broad market of banks, mutual funds, and pension funds known as institutional investors that have resisted major investments in crypto, likely due to regulatory concerns. The world’s largest pension funds have $23.6 trillion in assets, and mutual funds have $27 trillion in assets.

Reflecting on his desired policy outcomes, Bankman-Fried said, “We need to know what regulatory framework we are a part of, what licenses are necessary to play different roles in this space . . . that’s roughly where the money gets trapped.”

The following month, the House Agriculture Committee — which retains jurisdiction over the CFTC, thanks to the historical quirk of its origins — held a hearing on a controversial proposal from FTX to begin allowing investors to use borrowed money for a new form of round-the-clock crypto trading.

The plan, which would have cut brokers and other third-parties out of the trading process, drew condemnation from House Agriculture Committee chair David Scott, a Georgia Democrat, who called it “a serious threat” to global derivatives markets.

But it drew tacit praise from members like Democratic Congressional Committee chair Sean Patrick Maloney, a New York Democrat, who gushed, “I have to tell you, Mr. Bankman-Fried, I am fascinated by this, and I think this is a really interesting idea. You sure got everybody stirred up, and they hate it. They hate this idea.”

Bankman-Fried personally donated $5,800   Maloney this cycle. In September, Maloney introduced a more tailored version of Gillibrand’s bill to hand regulatory authority of crypto over to the CFTC.

A companion bill in the Senate was introduced by Michigan Democrat Debbie Stabenow, who has also received contributions from Bankman-Fried.

It is unclear when, if ever, FTX customers will be able to recover any of their assets.

Bankman-Fried tweeted on Friday that he is “going to work on giving clarity on where things are in terms of user recovery ASAP.”

Late Friday, FTX announced that it had been hacked. The company wrote: “FTX apps are malware. Delete them. Chat is open. Don’t go on FTX site as it might download Trojans.”