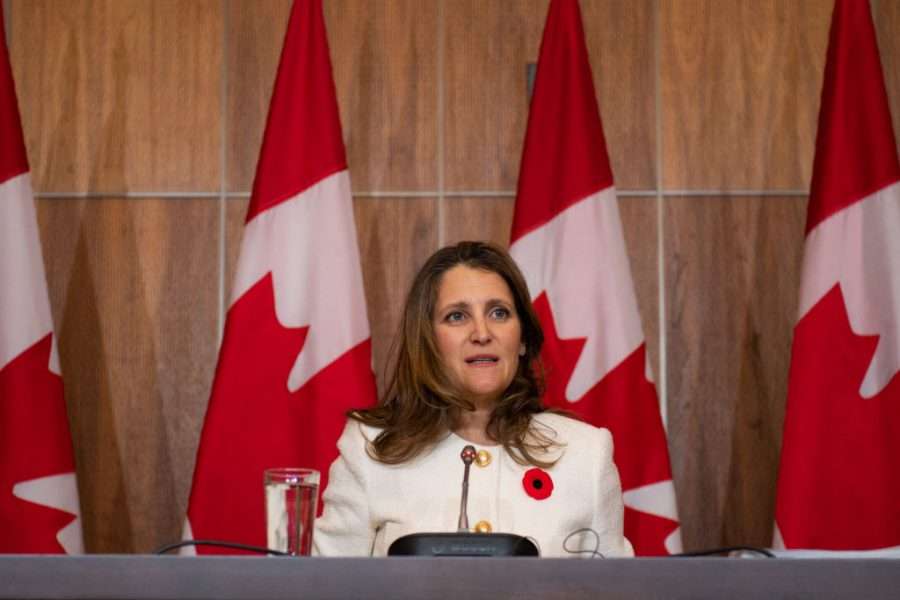 Other than suspending student loan interest, Canada’s fall economic statement promises next to nothing for workers. Bloodless technocratic tinkering is never enough, but during times of crisis, leaving structural change off the table is indefensible.

No one expected the Liberal government’s fall economic statement to be transformative — and Finance Minister Chrystia Freeland delivered on that anticipated lack of ambition. While the budget update wasn’t an austerity plan — and while a handful of measures ought to be welcomed — the thrust of the statement was business as usual at a time that begs for doing things differently in a big way. “We are keeping out powder dry,” Freeland said of the insipid statement in a speech that warned of a looming recession, should the potential downside of the country’s economic projections come to pass.

As you’d expect in a suite of Liberal priorities, the economic update had a handful of tax measures and retraining funds to encourage and facilitate investment here and there, with a focus on greening the economy. As ever, the party’s running assumption is that we can tinker our way out of climate catastrophe with a tax credit. The statement also promised to facilitate easier access to the Canada workers benefit through advance payment to previous qualifiers, which is good. Such programs should be low-barrier and easy to access.

Freeland is also promising to move beyond the government’s pandemic measure of freezing student and apprentice loan interest to permanently eliminating it beginning in April 2023. As senior economist with the Canadian Centre for Policy Alternatives David Macdonald puts it, the move is “literally the very least the government could do for students.” Indeed. Tuition rates are up in Canada and student debt is crushing those who choose to pursue postsecondary education, especially in the midst of an affordability crisis.

The economic update was delivered in the context of rising interest rates, soaring costs, a potential recession, and surging corporate profits. Freeland tried to put a positive spin on the current imbroglio, boasting that “Canadians are tough and the Canadian economy is resilient. And that’s why we can all be confident we will get through this, just as we have gotten through so much over these past two-and-a-half years.” Of course, not all Canadians need to be “tough” in the same way and to the same extent. Not those who run corporations heavy with excess profits that won’t be taxed, as the New Democratic Party had hoped they would.

“In fact, there is no country in the world better placed than Canada to get through the coming global slowdown,” Freeland continued. In the face of continuing — and probably increasing — hardship, those who are struggling will have to struggle just a little longer. Isn’t that always the way? Help is coming. It’s just over the horizon. Just keep waiting, it’ll arrive.

As Macdonald points out, after-tax corporate profits just hit 20 percent of GDP. That’s a record. The standard-bearer for corporate largesse, Loblaw, just reported an extra $1 million in profits per day, in the last quarter, as food prices jumped about 11 percent year over year. Across the board, grocery chains are reaping massive profits while people struggle to feed themselves.

But the suffering will pay off, Freeland promises. If we can just hold out a few years “with our fundamental economic strengths preserved, and the pandemic recession behind us,” well, then the world is our oyster. Because “there is no country in the world better placed than Canada to thrive in a post-COVID global economy.”

The country’s economic thriving tends to thrive for those at the top while down the line everyone else carries the burdens that make that possible. The rules of the game stay more or less the same, even with some important recent changes such as a daycare program and the Canada Child Benefit. For instance, the government’s promise to tax public corporate share buybacks at 2 percent net is a modest one that my irritate a few executives, but it won’t raise a ton of revenue or shift any structural relations of power or distribution of wealth. There will be no major measures to, say, tax capital gains at a higher rate or tax the sale of primary residences.

Macdonald puts it best when he says the problem is not economic, but political. “We aren’t short on money,” he writes for the National Observer. “We’re short on political courage.” He’s right. And Canada has long accepted an economic orthodoxy that privileges business over the workers who make industry possible. Canada is a global laggard on social spending as a percent of GDP. Pre-pandemic, in 2019, the country spent below the OECD average of 20 percent, at 18 percent — and was way behind global leaders including top five spenders France (31 percent), Finland (29.1 percent), Belgium (28.9 percent), Denmark (28.3 percent), and Italy (28.2 percent).

Canadians ought to be on guard against what may come in future updates and the 2023 budget. The government, the Bank of Canada, industry, and the usual suspects in the media are preparing the ground for austerity as they warn of a recession and talk about belt tightening. Of course, we know who will have to pull the belt tighter, perhaps cut another hole or two, as things get worse.

As always, those in the middle and toward the bottom are asked to bear the proportionately greater burdens — just as they reap the proportionately lesser rewards when times are good. The fall economic update isn’t austerity, and it even has a few policies the Left ought to support and fight to extend, but it portends a combination of the status quo and worse things to come. Bloodless, uninspiring technocratic tinkering is bad at the best of times. It’s beyond unacceptable during times of crisis.