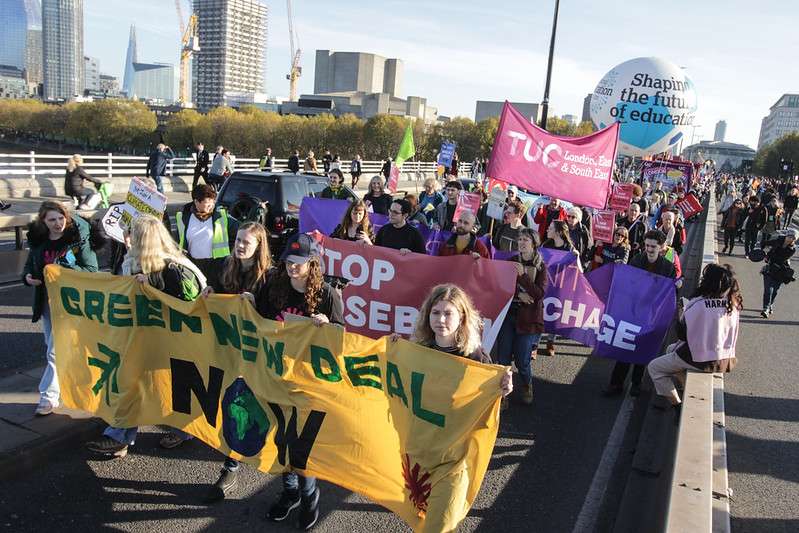 Marches took place across Britain on Saturday 12 November. Jane Graham and rs21 members report from the marches in Blackpool, Edinburgh and London.

The urgency of the climate crisis is mounting, with the last eight years the hottest on record globally and the UN’s environment agency reporting last month that there is now ‘no credible pathway in place’ which will limit temperature rises to 1.5°C. They write that ‘Only an urgent system-wide transformation can avoid climate disaster.’ Nasa predicts that maize and wheat production will be affected as early as 2030. The climate crisis has worsened floods in Pakistan this autumn which saw a third of the country under water –  millions of people in low-lying countries like Bangladesh will be forced from their homes in the decades to come, while we can expect billions to be displaced by the mid-century. Africa and South Asia – areas which have already experienced centuries of exploitation at the hands of European rulers – will face the worst of these disasters.

Meanwhile, world leaders gather at Cop27 – a Coca-Cola-sponsored summit in a country where public protest is effectively banned. And, far from winding down oil and gas extraction, fossil fuel companies are planning huge increases in production – as well as doubling their profits compared with 2021.

In the Blackpool late autumn sunshine our march (led by a samba band and fronted by a climate jobs banner) was greeted with smiles, clapping and dancing in the street as we passed by. People stopped to read the placards and nodded and waved, supportive of the message that the cost of living crisis, climate crisis and health crisis our communities are facing all have the same root: profit before people.

Many campaigns and trade unions from across the North West joined together. We marched alongside workers who have been striking for an inflation-proof pay rise, health campaigners demanding an end to attacks on the NHS and for our health services to return fully to public hands, and with anti-fracking campaigners and those opposing the proposed coal mine in Cumbria.

We marched while in Egypt, fossil fuel companies filled the COP27 halls to try to slow the progress of the negotiations. But there was power on the streets of Blackpool today. You could feel it. A live, electric thing.

We came together to share our stories, learn together, feel our collective strength. We marched for solutions to the cost of living crisis, for climate jobs, for climate justice, for a better world for our children. And we danced, and we sang, and Blackpool shoppers nodded, smiled and danced with us.

Thousands gathered outside the head office of oil giant Shell and then marched to a rally in Trafalgar Square.

Edinburgh campaigners highlighted to role of international banks like HSBC in the exploitation of African countries.


Protesters also opposed the development of the Rosebank oil field, a potentially huge development to the west of Shetland – permission to go ahead depends on the Westminster government.