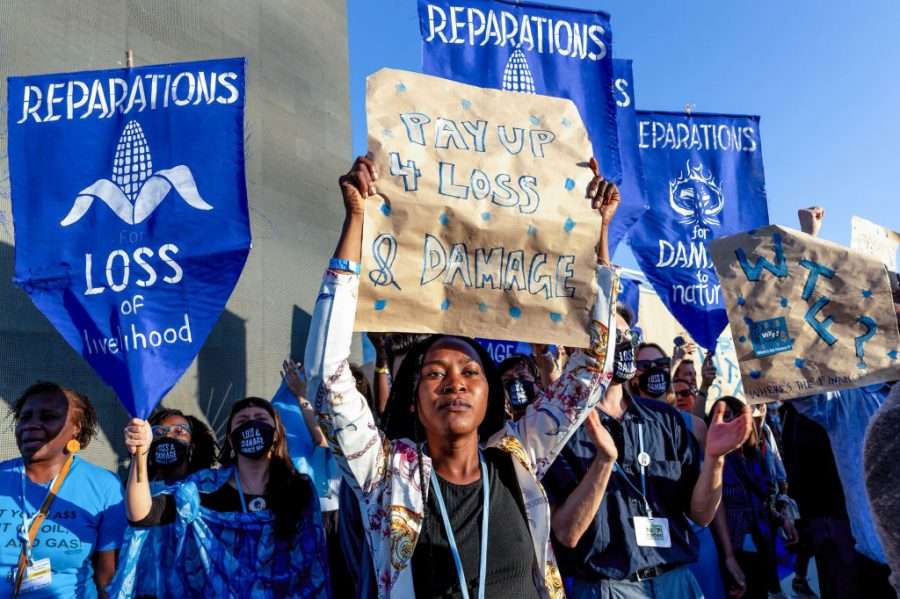 Wealthy countries don’t want to pay climate reparations, but they’re going to have to. COP27 officials are currently grappling with who will pay for climate-related catastrophe and how. They could look to postwar Germany for a model.

As officials at the United Nations–led climate summit in Sharm el Sheikh, Egypt, grapple with calls to create an international fund to cover the cost of climate disasters, wealthy nations who are dodging calls to pay for global damage caused by their emissions should look to the past to understand why such reparations are justified and even politically advantageous. Most specifically, they could take inspiration from Germany’s efforts to repair historical wrongs.

At the 27th Conference of the Parties to the United Nations Framework Convention on Climate Change, or COP27, negotiators from nearly two hundred countries are for the first time actively discussing funding for “loss and damage,” the global costs of climate change–fueled disasters, which are pegged at $290-580 billion per year in developing countries alone.

As protesters outside the summit demanded, “It’s time for the global north to pay for their responsibility,” ministers at the event from Austria and New Zealand together pledged more than $60 million for new loss and damage efforts. But experts say far more money is needed to address the problem — as is buy-in from wealthy countries like the United States, which has so far abstained from any commitment.

“Failure to provide loss and damage finance simply means loss and damage is being paid for by the poorest and it amounts to billions,” said Saleemul Huq, director of the International Centre for Climate Change and Development in Bangladesh, at a side event at the summit. “This is not acceptable at all. We need the parties most responsible for the climate crisis to step up at COP27.”

While developed nations like the United States and those in the European Union (EU) are disproportionately responsible for high emissions, most of these countries remain staunchly opposed to shelling out compensation to their developing counterparts, which are suffering the most severe impacts of the climate crisis. At last year’s United Nations (UN) climate conference, the United States and members of the EU joined forces to kill a loss and damage funding mechanism proposed by developing countries. Earlier this year at another climate conference in Bonn, Germany, the United States and EU blocked meaningful discussions on the topic.

And at a New York Times climate event in September, when US climate envoy John Kerry was asked whether the country should put money into climate reparations, he replied, “You tell me the government in the world that has trillions of dollars, cause that’s what it costs.”

But there are modern examples of nations successfully working to repair and restore social justice — and observers say Germany, in particular, could hold the key to successful climate reparations. For example, at the Bonn conference, nonprofit organization members in attendance said Germany representatives were more willing to discuss climate-related loss and damage than most of their European counterparts.

Legal scholars suggested Germany’s willingness might be due to the country’s track record of trying to reconcile with its past. Germany has paid billions to victims of the Holocaust worldwide and is still green-lighting new reparation payments today. It also recently agreed to pay Namibia roughly a billion dollars for its hand in the country’s genocide from 1904 to 1908. And after World War I, Germany began paying reparations as part of a “war guilt” clause under the Treaty of Versailles — and continued to pay off the debt for nearly a hundred years.

In truth, Germany’s current insurance-base approach to climate-related loss and damage funding is problematic. But the country’s past restitution efforts are being held up as a model for reparation projects in other parts of the world, including efforts to make the United States pay for the horrors of slavery it committed. Many experts are also drawing links between past humanitarian crimes and the devastation of the man-made climate crisis.

As Brandon Wu, director of policy and campaigns at ActionAid, an international nongovernmental organization focused on tackling injustice, put it, “There are active discussions in the US about how the same system that made it economically viable to enslave and transport people across an ocean to what is now the United States is what gave rise to the economic model that has been destroying the climate for over 170 years.”

Broadly, “loss and damage” refers to climate harms to human lives that go beyond what people can adapt to. It includes, for example, loss of lives due to flooding like the current devastation in Pakistan today, high food prices as a result of extreme weather in India, and the death toll and property destruction from a tropical cyclone that hit the Philippines last month.

The Paris Agreement, an international climate treaty signed in 2015, references the concept of loss and damage when it recognizes “the importance of averting, minimizing and addressing loss and damage associated with the adverse effects of climate change, including extreme weather events and slow onset events.” However, it also states that treaty sections mentioning loss and damage do not “involve or provide a basis for any liability or compensation.” This calls into question whether there is any legal basis for hard-hit countries to claim compensation.

But this doesn’t mean there isn’t a pathway forward. Innovative twentieth-century reparation efforts in postwar Germany, such as payments made out to Jewish and Namibian communities, suggest that climate change could trigger new methods of compensation that were not previously recognized.

“Events after the First and Second World War tell us that crises can give rise to compensation claims even though there were few precedents and hard legal provisions before that to acknowledge a right to damages,” said Matthias Goldmann, senior research fellow at Max Planck Institute for Comparative Public Law and International Law (MPIL).

Plus, added Goldmann, the clear links between wealthy nations’ emissions and global warming provide enough basis for legitimate claims for compensation. “We know that greenhouse gas emissions cause climate change and can be harmful,” he said.

Germany’s past efforts to make things right could hold other lessons for climate reparations. For example, in the 1950s, as many refugees from east Germany and farther east like Romania and Russia migrated to west Germany, the German government implemented an innovative wealth redistribution plan to ensure social security for its new residents.

“It was a radical policy imposed as taxes on property owners to help meet basic needs for refugees, but the German government did it because they knew social peace depended on it,” said Goldmann. Similarly, he added, “A recognition of historical emissions [in the form of payments for loss and damage] are important for ensuring global peace and stability.”

While it’s true that the horrors caused by the world wars — and the climate crisis — cannot be undone, “there is a moral aspect because reparations show that you are willing to take responsibility,” said Alexandra Kemmerer, senior research fellow at MPIL and expert on postcolonial German and European law.

Kemmerer added that Germany was incentivized to move forward with reparation payments, because they were framed as an important way “to reintegrate Germany into the international community.”

While there are lessons to learn from Germany’s past, the country’s present-day actions on climate reparations might not be the best model for other countries, since their approach leaves room for improvement.

Dubbed “Global Shield against Climate Risks,” Germany’s plan proposes using insurance premium subsidies to help pay for skyrocketing “socioeconomic losses” caused by the severity and scale of climate risks. Germany  originally announced the plan in October at the Group of Seven (G7), an intergovernmental political forum consisting of Canada, France, Germany, Italy, Japan, the United Kingdom, and the United States. Since the announcement, other countries like Ireland and Canada have pledged money for the initiative.

But according to experts, such an insurance scheme wouldn’t work for climate disasters, since these incidents are very likely to occur and their costs are extremely high.

“If I keep getting into car accidents everyday, which insurance company will be willing to compensate?” said Harjeet Singh, head of global political strategy at Climate Action Network International. Singh drew parallels to how climate-vulnerable communities — such as those situated along coastlines — have in many cases become uninsurable, because climate change has made expensive insurance claims a near certainty.

“Insurance is designed for extreme events with high costs that happen infrequently, and is not fit for addressing slow onset climatic processes,” noted a new discussion paper by the Loss and Damage Collaboration, a group of climate policy practitioners. “Nor is insurance relevant for non-economic loss and damage; for instance loss of culture is uninsurable.”

It doesn’t help that Germany is home to some of the largest multinational insurance companies, such as Munich Re and Allianz — which means they have a self interest in the insurance plan. “They know that the penetration of insurance is very low in developing countries,” said Singh. “So they want to build a market with subsidies which will ultimately benefit their own companies.

Previous reports have shown how payout from disaster insurance mechanisms in parts of Africa were “too little, too late.” Recently, even the Special Envoy to the Prime Minister of Barbados on Climate Finance wrote “climate change is an uninsurable event” in a critique of insurance mechanisms, including Germany’s Global Shield. Barbados is a highly climate-vulnerable island nation.

Additionally, Germany’s Global Shield plan is not currently governed by the United Nations Framework Convention on Climate Change (UNFCCC) processes. That means that unlike UN programs, all countries involved wouldn’t be guaranteed a say in how the Global Shield would be designed and implemented — and so, stakeholder engagement would likely be limited.

Support for a “Glasgow Dialogue”

In his November 11 speech at COP27, Joe Biden expressed general support for a G7-led Global Shield — but failed to specifically reference loss and damage and neglected to commit funds to address the problem. A spokesperson for the US State Department’s Office of Global Change, which oversees international climate negotiations, told the Lever, “Consistent with the Paris Agreement, the United States recognizes we must make increased efforts to avert, minimize, and address loss and damage associated with the adverse impacts of climate change.”

The spokesperson added that the United States is open to creating a “Glasgow Dialogue” to enable discussions between countries on loss and damage payments, as was agreed to at COP26, “assuming Parties can come to a shared understanding of the basic parameters for the discussions.”

But as the Lever reported from the Glasgow climate conference last year, the creation of the Glasgow Dialogue was a compromise poorer countries were forced to accept because the United States and its European allies refused the demand to establish a funding facility that would have moved ahead with providing financial resources to address loss and damage.

Last month, a Bloomberg Green report showed that while the United States is willing to discuss loss and damage, it remains opposed to discussions on actual funding for such a proposal.

At COP19 in Warsaw in 2013, countries in attendance officially recognized the need to address loss and damage, following the devastation caused by typhoon Haiyan in the Philippines. It remains to be seen whether Pakistan’s current flood, which has adversely impacted more than 33 million people and resulted in a financial loss as high as $40 billion, will launch a robust discussion of loss and damage during COP27.

This story was developed as part of a journalism residency program at Max Planck Institute for Comparative Public Law and International Law in Heidelberg, Germany. You can subscribe to David Sirota’s investigative journalism project, the Lever, here.