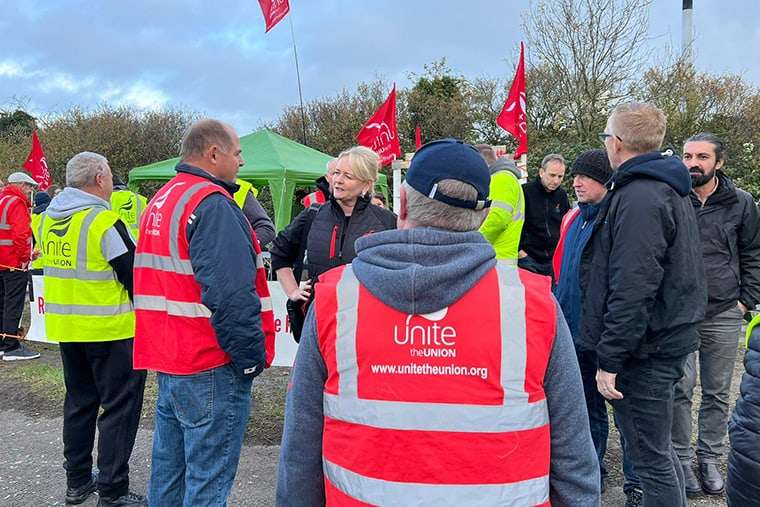 Nearly 70 HGV drivers and shunters employed by the Muller dairy firm ended ten days of strikes last week. The Unite union members, who deliver dairy products to supermarkets, have been striking on and off since August.

The workers are based in Stonehouse, Gloucestershire. The dispute is over imposed rota changes that destroy workers’ ability to spend time with their families.

In contravention of an agreement signed with Unite earlier this year, Muller is trying to impose a five days on and two days off rota system.  The changes would require all drivers to work at least one day every weekend.

The company made a £16.5 million profit in 2020 and forecast more in 2021.  It now wants to impose the new rotas to save money when they contract third party hauliers to deliver products.

More strikes are set to be scheduled if the changes are not withdrawn. Unite general secretary Sharon Graham visited the picket line last Saturday.

The workers are responsible for delivering milk, flavoured milk and potted cream to M&S, Waitrose, Sainsbury’s and Tesco stores across Britain.

Secret end to a bins strike

But following fresh talks, workers resumed collections after calling off the strike. Waverley Borough Council said it was “pleased” services had re-started.

GMB’s regional officer Paul Grafton, said the reason for the breakthrough was “confidential”. Workers should not accept below-inflation deals.

Unite in an NHS ballot

Nearly 10,000 NHS workers in the Unite union are to be balloted for strikes over pay. Unite is also planning to ballot thousands more soon.

Unite, which has 100,000 workers across the NHS, says that voting papers are going out across 36 NHS trusts and organisations across England and Wales  Workers in frontline patient care and essential services such as the blood and transplant services will vote on possible strike action.

The ballots will close before Christmas meaning that workers could walk out in January. Unite should act swiftly for joint action with the RCN and Unison unions.

Some 150 Petrofac workers stationed across several North Sea rigs were set to strike this week over pay and conditions.

The Unite union members work on Repsol Sinopec Resources UK onshore and offshore sites. A 48-hour strike was planned to begin on Wednesday.

A further 48-hour action is scheduled to take place on 30 November and 1 December.

The action involves a range of trades workers, from mechanics and electricians to safety technicians, pipe fitters and deck crew.

The union is now seeking the reinstatement of a 10 percent Equal Time payment which was previously removed, an additional 3 percent wage increase to cover “years of below inflationary increases”, payment for offshore medicals as well as increases to mileage payments.

Petrofac is a signatory to the Energy Services Agreement which is a collective bargaining agreement covering around 5,000 workers.

The action follows a swathe of official and wildcat strikes by offshore workers, most recently involving hundreds of drilling workers represented by the United Kingdom Drilling Contractors Association (UKDCA).

Unite last month called off strikes after one day of some other 450 North Sea workers after accepting a 10 percent offer.

Questions for the cops to answer over Hackney police station death

Candles spelled out the number 1,839. The group said this was the number of people who have died in police custody or from police contact since 1990.

The group tweeted, “We left some questions on the window of the cop shop. What was his name? What happened to our neighbour? Has the CCTV been viewed? How did he die? What support did he receive? Why wasn’t he taken to hospital?

“When he came into the station at 9am, what help was he asking for? If you refuse to care for our community, then we need to know what we need to do to keep each other safe”.

Outsourced workers at the Department for Business, Energy and Industrial Strategy were set to strike over pay and health and safety on Wednesday of this week.

The members of the PCS union work as caterers, cleaners, security guards, reception, post and porterage staff at the department’s head office in central London. They are employed by outsourcers Aramark and ISS.

The same group of workers fought and won some gains with an all-out strike in 2019. They are set to strike again on Wednesday of next week, 30 November, and 7 and 14 December.

A group of Uber drivers in Leicester are taking intermittent action over the amount they are paid to deliver takeaway food.

The car drivers said their strike hit restaurants with some meals going undelivered.

Organiser Parwinder Singh told the LeicestershireLive website, “Uber, and Deliveroo as well, pay really low amounts for deliveries. When Uber first came to Leicester in about 2017 we’d get up to about £11 a delivery because they wanted to attract people.

“But then the amounts you can earn went down and it’s now really poor money for the deliveries and doesn’t cover the costs. Our WhatsApp group, Uber Delivery Strike, has about 100 members who all deliver in cars and are striking.”

He said that during their hour-long strikes, the restaurants were being forced to either find drivers from further away or stop offering home deliveries.