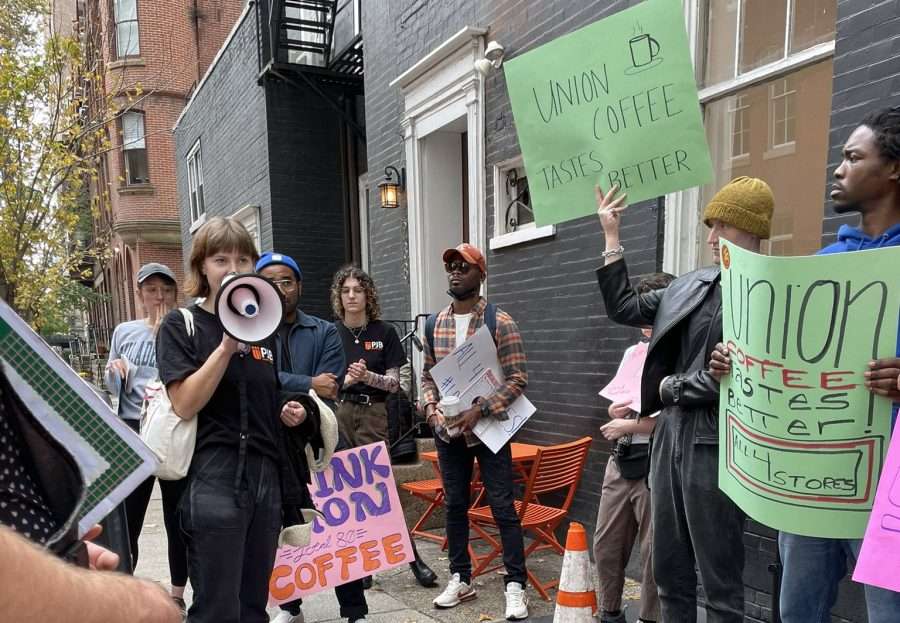 Starbucks baristas have made headlines for unionizing across the country. But smaller coffee shop workers have organized, too. And in Philadelphia, baristas are looking to unionize the entire city.

On Tuesday, October 25, workers and organizers gathered at the headquarters of Philadelphia’s Workers United union hall to celebrate a recent string of victories: the voluntary recognition of unions formed at locations across two local coffee shops, Reanimator Coffee and Ultimo Coffee.

Philadelphia Joint Board, Workers United Local 80 — the newly formed union under which the two shops have organized — is at the forefront of a growing movement to unionize across the coffee industry, and the momentum is not slowing down. There are currently four more campaigns underway to unionize stores across the city. Organizers there are hoping to join the five separate businesses, sixteen stores, and over 150 workers currently represented by the union.

In the past year Starbucks unionization efforts have received national publicity, while comparatively little attention has been paid to unionization campaigns at smaller coffee shops. But recent months have seen unprecedented union activity at small coffee shops across the country, too, with successful campaigns in Boston, Pittsburgh, and Chicago.

Among these upstart unions, Local 80 is unique: it is the first local in the country devoted to organizing coffee shops, cafes, and bakeries across company lines. Because the food service industry is largely composed of independently owned businesses and small chains rather than multinationals like Starbucks, the experience of Local 80 is instructive on how food service workers can find a foothold in the labor movement.

Philadelphia baristas’ successes are the result of years of behind-the-scenes organizing work. In the fall of 2019, baristas formed an informal council that started to explore the prospect of union organizing at several shops across the city. Yet despite the creation of a network of committed organizers, existing unions were largely uninterested in helping — something Local 80 lead organizer Eli Zastempowski sees as a missed opportunity. “Before the pandemic, the barista council went to multiple unions and asked for them to help us organize and get contracts, and they would tell us they wouldn’t want to,” Zastempowski told Jacobin. “I think it was a huge mistake: these workers had all been ready.”

Despite unsuccessful union bids at several area coffee shops and a lack of support from established unions, the organizing work continued. In June 2021, Zastempowski helped to organize an independent union at Korshak Bagels, with near-unanimous employee support. Management voluntarily recognized the union as soon as it was made public. When it came time for contract negotiations in March 2022, the fledgling union affiliated to the Philadelphia branch of Workers United, a Service Employees International Union (SEIU) affiliate that has also provided support to the Starbucks union campaign.

In the wake of the Korshak Bagels union’s victory, workers at other cafes who had already been organizing behind the scenes were brought into the fold. Central to their decision to join Workers United was the union’s promise to let the workers continue to take the lead. “It was a key moment where we could expand our toolset and continue leading our own campaign,” Ultimo Coffee barista and organizer Glaive Perry told Jacobin. “We’ve been able to make a lot of key decisions about how we want to organize.”

As a worker-led union, Philadelphia Local 80 has been able to avoid some of the occasional pitfalls of traditional workplace organizing, like mismanaged resources and bureaucratic sluggishness. Local 80 adheres to a bottom-up structure that relies almost entirely on employees themselves (rather than paid staff) to organize their workplaces. At the same time, since Workers United Local 80 is affiliated with SEIU, workers can tap into the resources that a large union has to offer, like expertise in contract negotiation and a legal defense fund.

“The workers are able to make decisions about organizing because they understand the conditions that they’re in better than any union rep could,” Perry said. “It feels very natural, very empowering, and very effective.”

This model is a significant departure from most food service unionization efforts and extant unions, which are found mostly in large shops like cafeterias, airports, and hotels. By necessity, campaigns in these places often proceed in top-down fashion: they are the result of careful planning and work by dedicated organizing professionals, an often-protracted process that can stretch out for months or years. Rarely are such efforts conceived of and organized purely by employees.

The question for Local 80 will be how the union can maintain its momentum as its small team readies for more, and bigger, campaigns. They’ve found a partial answer in using the nature of independent coffee shops to their advantage. While organizers at Starbucks locations have faced opposition to their efforts ranging from backlash — firings, shuttered stores, and intimidation — to personal pleas from management, organizers at small shops generally have seen more positive outcomes. Most owners have agreed to voluntarily recognize unions shortly after they have been announced, with little in the way of large-scale retaliatory measures.

These more measured responses speak to the more precarious position of small businesses generally: they don’t have corporate resources behind them to quell conflicts and finance fines and lawsuits, and thus can’t afford to pursue disciplinary action like the kind seen at Starbucks. And small, specialty coffee shops typically pride themselves on being progressive employers and fixtures in their communities. Union-busting can severely hurt their reputations and their business.

Still, some owners have pushed back. After agreeing to voluntarily recognize two of the company’s stores on October 14, Ultimo Coffee’s management has declined to do the same for the remaining two, leading to the shops filing for a National Labor Relations Board election. Ballots were mailed out to workers on November 1 and will be counted on November 23.

Since the stores announced their intent to unionize, bosses have sent company-wide emails emphasizing the “mom-and-pop” nature of the business — a common anti-union refrain at small shops. “We are not Starbucks,” begins one email, before stating, in a line that could have been taken straight from Starbucks’ anti-union playbook, that “We have all benefit [sic] from the direct communication that is possible between our employees, our managers, and our owners.”

But workers insist that the only way communication can be truly equitable is through a union. “I have more faith in a union than in my employers because a union is made up of people in a similar situation as me,” Ultimo barista Aisha Popenoe told Jacobin. “We’re all workers: we have a shared interest.”

Working conditions at small shops are sometimes just as bad as those at large corporations. Without the protection of a union, management can use appeals to “family” to cover up mistreatment. Employees at Ultimo recount instances of wage theft, harassment, racism, and anti-LGBTQ sentiment being ignored by ownership. “If we had a family dynamic at Ultimo” prior to unionization, Perry tells me, “it was a very dysfunctional family dynamic.”

In Local 80, workers have hit on an advantage: they can build solidarity and momentum across separate businesses, while management can’t. While corporations like Starbucks can attempt to take on the intra-corporate union movement as a whole, rolling out a media campaign to persuade partners nationwide to vote against certification, bosses at local shops are restricted to communicating only to their handful of workers — while workers across the city are free to talk to each other and organize together under the aegis of Local 80.

These cross-shop networks are a key part of Local 80’s strategy. Workers from already-unionized shops are using their knowledge and experience to help organize elsewhere. “Something that’s really special about the citywide movement is that it happens at every stage of the organizing process,” Perry said. “Workers at different shops actually do organizing for different companies.” By organizing across shop lines, workers have sought to overcome the typically atomized nature of the food service industry.

In the long-term, Local 80 aims to negotiate a master contract across all shops represented by the local to ensure wage parity and to bargain for bigger wins, like healthcare. Such a contract has the potential to dramatically shift the balance of power in the city’s large cafe sector, a critical and otherwise highly disaggregated segment of Philadelphia’s restaurant industry.

For now, as contract negotiations proceed at several recently unionized shops, the local is having employee-organizers from workplaces across all five companies present at the bargaining table: a show of solidarity and a reminder that union members have resources and backing beyond the confines of a single location or business.

Organizers stress that their work has an outward-looking component. “A lot of the discussions we’ve had are ‘can this provide a model for other cities in the country?’” Zastempowki told Jacobin. “It’s our hope that, if we get some powerful contracts, it can show workers that they can be in charge of running their own union.”