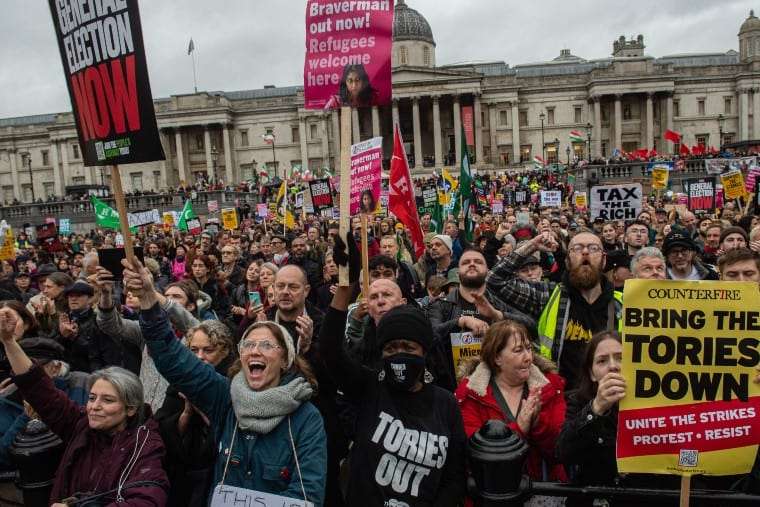 Uniting strikers is the best way to beat the Tories (Picture: Guy Smallman)

More than half a million workers have now voted for national strikes over pay.  As well as the long-running rail, post and BT battles, there are now large sections of nurses, civil service workers, university workers, college staff and Scottish teachers who beat the thresholds of the anti-union laws.

That’s a force that could smash all the Tory plans to impose austerity that were set to be announced this week. And by fighting for above-inflation wage rises, strikes can stop the process where pay cuts suck billions of pounds from workers to the bosses and the state. The Tories’ tame media are outraged. The Telegraph newspaper “revealed” to its readers this week that “the six largest health unions have held talks about launching a series of walkouts at the same time”. Imagine!

As a union spokesperson responded, “There is no point having a strike if nobody notices. People say ‘ah but it’s going to be so disruptive’. Well that’s what a strike is about.” Everyone must build solidarity with the strike.  Plan now to go to picket lines in big numbers, hold collections at your work, invite strikers to meetings and demonstrations. And workers have to push their unions to organise for this everywhere.

In addition, around 1 million other workers in schools and the NHS are balloting now for strikes. The hope and the potential to mobilise is clear. It would take no imagination to choose a day in early December for everyone to be out together and for more to be added later on.

But we also have the experience of the last six months, where union leaders held only occasional strikes and made no effort to bring them together. That won’t work now, even with the increased numbers possibly involved.

The stakes are extremely high on both sides. Workers will either break through or suffer major assaults on their living standards.  So to win the unions have to create a political crisis. That means announcing extended and escalating strikes—all-out is best—and if at all possible striking together. The strikes must not be delayed for “the next ballot result”.

Finally more strikes don’t mean dropping wider politics. Workers have to battle over pay and jobs, but they also need to be anti-racists and fighters against climate chaos. It’s not an accident that the Daily Mail this week tried to blame nurses’ hardship on refugees.

Our side has to crush such scapegoating. And the strikes show far more power to win than all the shades of Labour Party parliamentary politics from Keir Starmer to Momentum.

Mobilise the half million, join them and use all our strength.