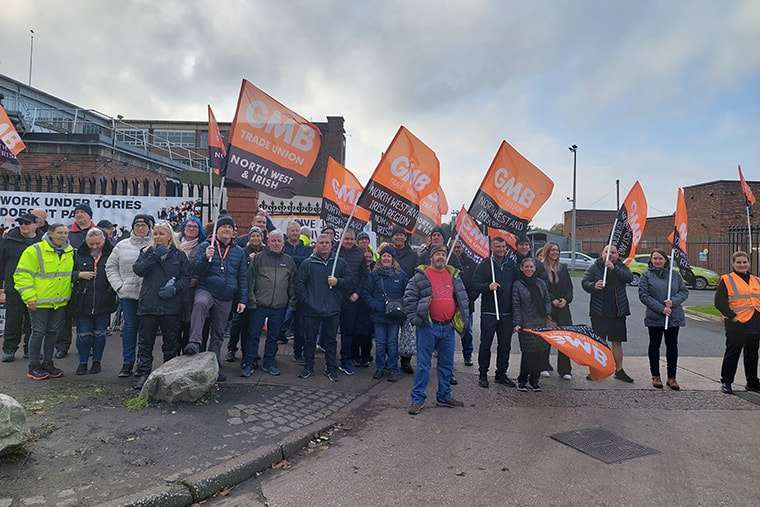 Over 750 Jacob’s biscuit factory workers in Aintree, near Liverpool, escalated to an all‑out strike on Monday in a battle over pay. The GMB union members are in their eighth week of action fighting for a minimum of an 8.5 percent pay rise.

Striker Liam told Socialist Worker, “All-out action was our last and best card to play, especially as we go into this busy period. Hopefully this will make the company listen.

“People knew it might come to this and were prepared—we believe we deserve a better pay rise.” He added, There’s always people coming down to support us—the site has been here for over 100 years, so local people have relatives and friends who work here.”

“Their only excuse for not giving us a pay rise is that the other factories would want one. The factory in Carlisle is going to be striking too.

“We just want to go back to work with some dignity. We’ll be staying out until we get what we’re asking for. I don’t know how they sleep at night. They just don’t care.”

Strikers have also accused bosses of “bullying”. And there is a consensus—“they just don’t give a shit.”

Two strikers were sacked after a short video was shared of the strikers discussing scab workers. And another woman was sacked for gross misconduct after confronting a manager about her attitude.

Striker Helen told Socialist Worker, “It’s got worse since new management came in four years ago. When you try to feed back they don’t want to know—they have no respect for us.”

Susan, another striker, added, “Sometimes it’s like being in school having to ask if you can go to the toilet or sit down. Some of our jobs are really physical.

“In the pandemic we worked and put our lives at risk while managers worked from home. Now this is how we’re getting treated. They need to start talking—listen to us and put an offer on the table.

The all-out action is a fantastic sign of strength from the 751 ­strikers. If they stand firm against bosses, they can be confident to demand an above inflation pay rise.

‘I’ve nearly lost a hand’ because of safety cuts

Back in 2017 bosses took £4,000 off the workers’ wages to pay for “modernisation”. “They put everyone on 12-hour shifts to cut down on paying out for overtime,”

Helen explained. “They didn’t modernise anything—that factory is held together with Sellotape. At one point there was only one toilet in the whole factory for women.

“The roof is also constantly leaking—but it’s covered in asbestos so they can’t get it repaired. There’s a pipe covered in bird poo that floods.

“In C block a man fell through the roof—by the evening they’d passed it off and said it was alright to go back to work. All management had done was patch it up.”

Another striker told Socialist Worker, “My mum died a few weeks ago and I took all five of my compassionate leave days.  Then later for the funeral I asked if I could have another day off—in four years I’ve only had one day off. They said no and told me to take it as holiday.

“They think they’re superior—we’re just their little minions. They get off on the power trip.”

Helen added that health and safety is a real problem. “They changed the way training is done. You’re not paid to train people—you’re just expected to do it.

“And because they’re short‑staffed when you’re training you’re taken away to work the line. Then it can be three days before you come back and have to start all over again.

“Now we have a woman, who doesn’t sit in the factory, ticking off that training has been done when it hasn’t.

I’ve nearly lost my hand because people don’t know how to use the machines properly. Then they blame us that there’s not enough training being done.”

Picket lines have power to stop the scabs

On Monday morning, over 100 strikers joined the first as well as the second shift of pickets, which run on three gates for 24 hours. Music, horns, and cars beeping kept the mood high after strikers unanimously voted for all-out action following a mass meeting.

In that sense, it’s an example of how a good picket line should be. Rather than leave strikers sitting at home feeling isolated, it brings them together where they get a sense of their collective power.

That power is their strength—and they can use it on the picket line to win. On Monday a video showed a coach, which had apparently driven scabs across the picket line, leaving the plant.

Strikers and their supporters are rightly angry at the Ellisons coach firm. But they can also stop it—by standing in the way if necessary.

Union laws make workers jump through hoops to get a “mandate” to strike.  If you’re on strike, it’s because the majority of people in your union want to—and you should try to stop scabs undermining you.

You can ask people not to go in, you can persuade them to join you, and you can shame the ones who cross. But if the bosses are determined to break your strike, you’ve got to stand in their way. Union leaders should call for mass pickets.

Names have been changed. Donate to the strike fund at bit.ly/Jacobsfund