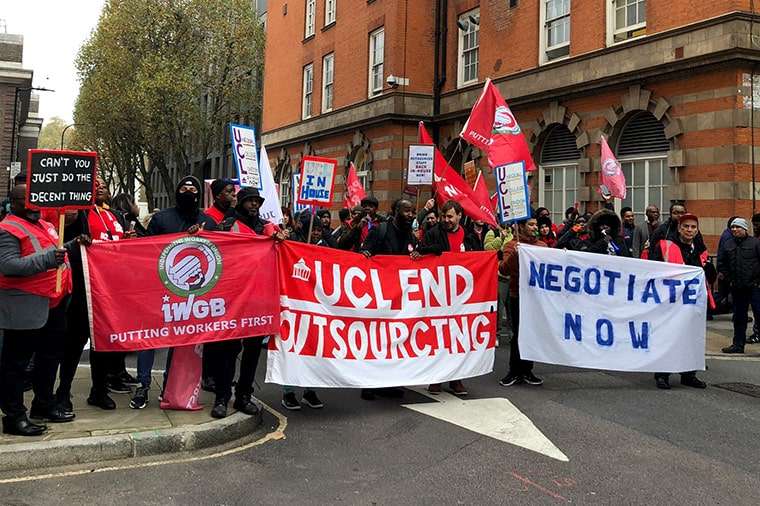 Security workers at University College London (UCL) stood defiant on picket lines on Monday. Members of the IWGB union are demanding better pay, an end to outsourcing and to stop outsourcers from using agency workers to break strikes.

The security workers are outsourced to Bidvest Noonan, which in the last few weeks has brought in upwards of 50 agency workers to break the strike. Now the company is also cancelling overtime shifts for striking workers in an act of victimisation.

The IWGB has also reported that new agency workers are being paid below the living wage. This goes against the promises made by the university to pay all its staff a living wage.

This is another flagrant example of companies using Tory anti-trade union laws to try and crush strikes. But strikers have made it clear they won’t be intimidated. Lively and loud picket lines saw workers call to be brought in-house and for UCL to negotiate.

Workers are hitting back at poor pay at the University of Sheffield International College. Some 84 percent of UCU members at the college voted to strike after bosses refused to raise pay by more than 5 percent before January of next year.

The members of the UCU union were set to strike on Thursday and Friday of this week and on 28, 29 and 30 November.  Workers will also work to rule from 21 November—which means they will not pick up any overtime hours to make up hours lost to strikes.

The strike will be the first ever strike at a privatised higher education provider.

Almost the full package vote to strike at DS Smith

Around 1,000 workers for DS Smith who make corrugated packaging for many industry giants have voted to strike over low pay. An impressive 93 percent of members of the GMB union at the company voted to strike.

Bosses offered a pay increase of just 3 percent consolidated increase plus a payment of £760 for 2022-23—a massive real terms pay cut.

The union members at five sites including Louth in  Lincolnshire, Featherstone, in Yorkshire, Clay Cross, in Derbyshire, Devizes, in Wiltshire and Livingston, in West Lothian plan to strike at the end of this month.

This strike has the power to hit companies, including PepsiCo, KP snacks and Brewdog, who use DS Smith packaging. Strike dates were set to be announced this week.

Engineers at Fox’s Biscuit factory in Batley have called off planned strikes. Members of the Unite union voted to accept a pay offer of a 6.5 percent pay increase backdated to 1 April and 7 percent next year.

The number of days workers wait before receiving sick pay will be reduced from two to one. And they will receive full sick pay for ten weeks rather than eight.  For accepting the offer, they also received a £100 one-off payment.

Bosses initially offered 5 percent, and workers called five days of strikes. Though an improvement, the settlement is still a real terms pay cut and strikes could have won more.

Over 500 workers at housing charity Shelter are set to strike for two weeks. The Unite union members voted by 85  percent in favour of strikes that are planned for Monday 5 December to Sunday 18 December.

Management offered a 3 percent pay increase and refused to return to talks, instead offering one-off payments.

Strikes off the menu for Asda drivers

Strikes by 80 HGV drivers employed by Wincanton on an outsourced contract to deliver food for Asda are off the table.

The Unite union members were set to be balloted for action but have now accepted a 9.5 percent pay increase when bosses had originally offered 7.4 percent.

Community support workers at Hounslow council in west London are being balloted for strikes.

The Unite union members are employed by Hestia and provide support for mental health, addiction and immigration. Unite says the charity is “imposing unrealistic changes” to working practices that will make the vital services impossible to provide.

Manx teachers say no thanks to pay cut

Some 400 teachers across the Isle of Man are set to walk out over pay and conditions. Members of the NASUWT union overwhelmingly rejected a pay offer that would give most a 78 percent pay increase—a real terms pay cut.

Six days of strikes are planned with the first two starting on 30 November. Alongside this the teachers have refused to cover breaks or absences.