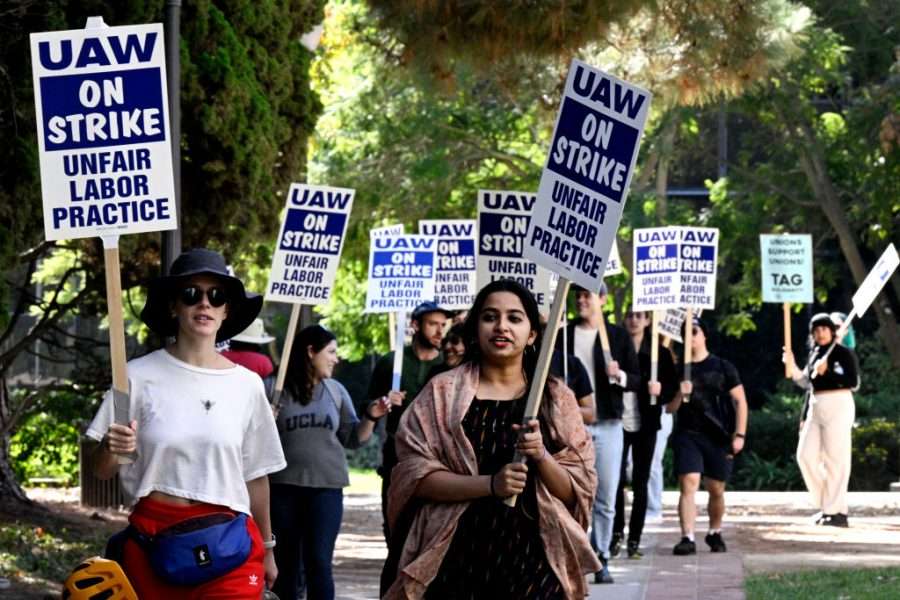 Yesterday, unions representing 48,000 graduate student workers in the University of California system went on strike. Jacobin spoke with striking workers at UC Berkeley about their demands and the organizing leading up to the strike.

Around 48,000 union workers across the University of California system are on strike since Monday. (Brittany Murray / MediaNews Group / Long Beach Press-Telegram via Getty Images)

On Monday, November 14, four different unions representing forty-eight thousand graduate student workers and academic researchers across the University of California system went on strike. Organizers are saying it’s the biggest academic strike in US history, and it’s one of the biggest strikes, period, in the last few years.

Academic workers say they’re striking against the UC’s unfair labor practices and its refusal to bargain in good faith over new contracts. In negotiations for new contracts, workers say, the university has refused to agree to wage increases that keep up with California’s skyrocketing cost of living. On Monday, Jacobin spoke with workers on the picket line at the University of California, Berkeley, about their demands and their experience organizing for the strike.

Why is everyone on strike today?

It’s a combination of four bargaining units on strike: the postdocs, the academic researchers, student researchers, and student employees. All four of them have been in bargaining for over a year now to earn new contracts with the UC system.

We are striking over UC’s unlawful practices at the bargaining table. We’ve filed over twenty unfair labor practices with the Public Employee Relations Board, and UC has failed to rectify pretty much all of them. As a result, we just said, “Enough is enough.” We have to go on strike to resolve this.

Consistently, the UC has been committing unfair labor practices at the bargaining table. It’s pretty clear to everyone that UC is just blatantly breaking the law and bargaining in bad faith. So we’re out here until they decide to bargain in good faith with us.

What has the organizing been like leading up to the strike?

Last year, the graduate student researchers were not even unionized. So that effort took a lot of work. We only won that union recognition by having a strike authorization vote among just the researchers, which was a big success. And as soon as we had that, UC caved pretty much immediately.

A lot of departments have become politicized pretty quickly. There’s been a lot of rank-and-file efforts, and a lot of grad students are united around trying to win better working conditions.

I’ve been really appreciative of how much say anyone who wants to [has been able to have] in it. I’m a first-year graduate student, so this is my first time here. I just signed up to be a union rep; it was a volunteer thing.

So then I was going to all the astronomy organizing committee meetings, and then we always got these invitations for the grand organizing committee meetings of the entire school. And I decided to just start showing up. I immediately was able to have a voice and help in the planning and figuring out what’s going on. So I was appreciative of how much of a grassroots effort it has been.

What do you hope to gain from the strike?

The [immediate goal of] the strike is to get UC to halt its unlawful practices. It’s trying to make unilateral changes without going through the union, which is illegal, as well as withholding information. But ultimately, we want fair contracts that are going to give us fair compensation that matches the value of the work that we do. We do most of the teaching and research in the UC system. Our wages right now don’t reflect that and are causing a huge rent burden.

One of our biggest demands is for a cost-of-living adjustment. The Bay Area is one of the most expensive places to live in the United States, and many of us don’t make a living wage. I also hope that academic workers start to think of themselves as workers more.

We want to be able to get UC to bargain in good faith and rectify the unlawful labor practices. But we’re also aiming to win a fair contract for every worker. That means a livable wage; it means transit subsidies and bike subsidies; it means childcare; it means equity for international scholars. It means all of this, because that’s the only way a just workplace is possible.

I’ve had several encounters with other student researchers who have been in tough workplace situations; they’ve had a principal investigator who was not good to them, who was bullying them. I’ve had student researchers who have experienced sexual abuse, sexual harassment, and they’ve had almost no recourse because we don’t have a contract that we can enforce. That’s been a recurring theme. Once we have that contract, we can actually resolve things on par with UC instead of these issues being handled unilaterally by the university.

Zooming out a little bit, I want to see that workers can come together in this setting, in an academic setting, and run this place, or at least have a say in how this place is run. We do the work, we produce the value, so we should be making some decisions here.

One of our lines is that our working conditions are our students’ learning conditions. I think that’s really true. I’ve noticed that the times that I’m the best teacher are ones where I’m in the best financial place.