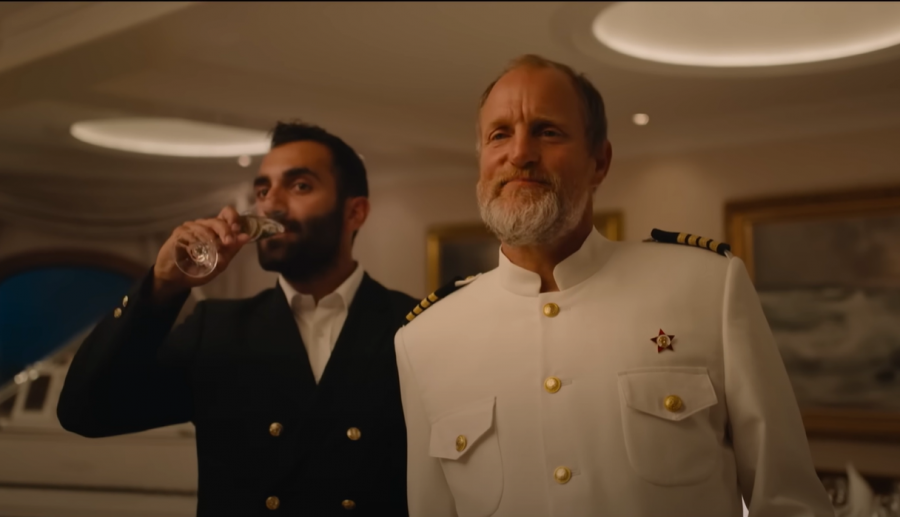 Triangle of Sadness is more than a little over the top at times. But so what? Unlike every other movie at the theaters, it’s over the top in its scathing portrayal of the ugly realities of contemporary inequality.

Triangle of Sadness seems designed to be a gift for the suffering left. A kind of anti-Idiocracy dark comedy targeting the rich offers many delights, watching the clueless and obnoxious and insane behaviors of tech billionaires, Russian oligarchs, fashion models and “influencers,” and old-money senior citizens who tootle on brightly about how their weapons manufacturing corporation has been protecting American freedoms for decades, and so on.

With Triangle of Sadness, Swedish writer-director Ruben Östlund continues his unbroken flow of award-winning internationally successful arthouse films, following Force Majeure (2014) and The Square (2017). He’s got an undeniable gift for provocative subject matter, and there’s been a lot of chatter among cinephiles about the epic vomiting scene at the midway point of Triangle of Sadness, which makes the Mr. Creosote vomiting scene in Monty Python’s The Meaning of Life seem restrained by comparison.

In this notorious scene, the opulently dressed idle rich aboard a luxury yacht are served a seafood banquet during a bad storm at sea. Seemingly unable to fathom the idea that their enjoyments could be interrupted even by natural forces like storms, they all gulp down liquor and caviar and oysters and everything else most likely to create mal de mer aboard a heaving, pitching vessel, until the whole vast dining area is awash in puke.

Then the overwhelmed plumbing system explodes, and massive amounts of urine and feces pour out, engulfing plutocrats and crew members alike. Allegory, anyone?

A guest aboard the yacht during the notorious vomit scene. (Neon, 2022)

Meanwhile, the alcoholic captain Thomas Smith (Woody Harrelson), who claims to be an American communist, or a Marxist, or a socialist, depending on mood, and who’s been refusing to fulfill his duties for most of the voyage, is holed up in his chambers playing drinking games with the Russian capitalist Dimitry (Zlatko Burić). They’re trading quotations they’re looking up on their phones, with Thomas quoting Mark Twain and Noam Chomsky, while Dimitry quotes Ronald Reagan and Margaret Thatcher.

Periodically there’s a cut to the wheelhouse, which is empty. Though it seems disaster is imminent, and the microcosmic “ship of fools” is likely to sink, there’s nobody at the wheel, see? And isn’t that just like Our World right now?

Yeah, this visual gag is where the film starts to lose me. This wink-nudge moment seemed suddenly too smug and cute by half. Still, I hung on a while longer, till the shipwreck finally occurred, though it wasn’t the storm that did it. There were so many disastrous scenarios converging, it was suspenseful wondering what would finally bring down the yacht. In an earlier interlude, the wife of the Russian oligarch, Vera (Sunnyi Melles), demanded that the entire crew, including those who work in the engine room, abandon their posts and take a forced swim to prove her point that “everyone is equal.”

And since the head of staff, Paula (Vicki Berlin), had already instructed the crew that they must say an enthusiastic and fawning “Yes!” to every passenger’s request, in no time they’re all in swimwear hurling themselves overboard.

Later when pirates turn up and lob a grenade onto the deck, Clementine (Amanda Walker), the chirpy old matriarch of the weapons manufacturing company, picks up the grenade and warbles to her husband Winston (Oliver Ford Davies), “Oh look, Winston, is it one of ours?”

That was a fun moment. And it was a nice touch, using the first names of Winston Churchill and his wife Clementine.

But Triangle of Sadness lost me completely during the third and last section of the film, when a small group of survivors of the shipwreck are marooned on an apparently deserted island, and they all celebrate after watching one of their number beat a donkey to death with a big rock.

They’d been terrorized night after night by the outcries from the donkey, not recognizing the sounds as braying, thinking it might be a wild animal about to attack them. But before the poor, harmless donkey gets hit with the rock for the first time, it’s quite clear it’s a donkey. Still, everyone urges the tech billionaire Jarmo (Henrik Dorson) to go ahead and finish beating the donkey to death, and then later there’s a party in his honor, and everyone at every class level cheers and applauds.

That includes Dimitry; Paula; the beauteous young fashion model couple Carl (Harris Dickinson) and Yaya (Charlbi Dean, who died tragically young this summer); the yacht’s “head toilet cleaner” Abigail (Dolly de Leon), who’s become “captain” of the island because she’s the only one who knows how to fish, cook, and build a fire; and the ship mechanic Nelson (Jean-Christophe Folly), who gets accused of being one of the pirates who sank the yacht and argues that he’s only suspected of it because he’s black.

The donkey-killing party is the only time in the movie when complete group cohesion is achieved.

So from a cheerfully irreverent, though overlong, satire of the callous, self-important, and idiotic behaviors of the rich, we suddenly move to a more general take on humanity as united by a hopeless kind of dopey sadism. You can make a case for that too, of course. But it hardly seems worth spending hours on a class-based black comedy if, in the end, the point seems to be that everybody’s fundamentally awful.

Though according to Östlund, one insight he wanted to offer was that lots of wealthy people are delightful, whereas plenty of poors are nasty, which is why Dimitry is clearly supposed to come across as self-amused and charming whereas the scowling Abigail, as soon as she acquires some power, abuses it harshly:

“There is a conventional way of looking at class: the poor people are nice and rich people are mean,” says Östlund, who was aware how subverting this cliché might be perceived. “If I say ‘No, they are human beings’, and they are going to maybe be mean or good . . .

Therefore, Östlund decided “I wanted to portray them all as nice” — the wealthy characters, that is — and this leads to two areas of confusion:

Those characters are supposed to be “nice”??
And what does it matter if they are “nice,” in terms of smiling and making genial small talk? Who cares?

Trying to get at what Östlund is doing is necessary because he’s dealing in satire, and satire is supposed to be mockingly criticizing something. So — what is he mocking, exactly? At first, it seems crystal clear, and Östlund is doing interviews backing up his class critique, leaning especially hard on versions of this anecdote:

Ruben Östlund recently screened his new film Triangle of Sadness to a select audience in Paris. Among the attendees was “one of the richest persons in France”, who stood up during a Q&A and started screaming that the film was “too simple”. As he recounts the story to me, Östlund looks disgusted. “No, it’s not very complicated,” says the Swedish director, folding his arms defiantly. “It’s not OK to exploit another human being and pay them a s*** salary. And it’s not OK to make a huge profit, using other people. It is that simple.”

But the more you read, the muddier Östlund’s politics become. There’s a notable tendency in various publications to represent him as a “sane” and bemused centrist caught between ranting political extremists:

He grew up near Gothenburg in a family where lively political debate was commonplace. His mother is a self-described Communist, while his brother was a right-wing conservative. “When we’re having family dinners, it [is] constant ideological battles.”

He’s for bosses paying fair wages and everyone paying their fair share of taxes and he’s critical of vaguely observed “hierarchies” that organize our lives. Magazine profile-writers hasten to assure us of his “reasonable” stance overall:

He’s not against the rich or capitalism itself but questions the legitimacy of a system where the economy is valued higher than the quality of people’s lives. “The one thing that I’ve found in every country that I’m travelling [to] is that young people can’t get a place to live,” he says. “And it’s absurd. Are we living to improve the economy or is the economy there to improve our lives? It’s almost like we have forgotten about the qualities of capitalism.”

Well, I guess it’s better than what we usually get from filmmakers, so why quibble? But it’s hard not to wish for something stronger. Östlund is often inclined to go after such soft targets.

The first section of the film, for example, starts with the often laughably shallow world of fashion, featuring a horde of male models all auditioning to be hired for a photo shoot by removing their shirts, walking up and down, and other elementary tasks while being judged ruthlessly by panels of fashionista types. It’s in this scene that we find out what a “triangle of sadness” is: the area above the nose and between the eyebrows where the human face is very expressive and inclined to wrinkle. Botox is suggested for the extremely young Carl.

The scene ends with Carl and the other models demonstrating the forbidding glower typical of models’ expressions in high-end fashion spreads for brands like Balenciaga, versus the ingratiating grin for low-end brands like H&M, said to be communicating “Oh we’re so cheap, please buy us!”

The models are challenged to switch back and forth about ten times — glower, grin, glower, grin — until the bit, which was never all that scintillating, is exhausted. It reflects Östlund’s fascination with what seem to be relatively well-known and basic points about the fashion industry. As he said in one interview, “it’s a little scary that industry because it’s everything that is connected to beauty, and beauty is also telling us so much about hierarchies.”

Östlund explains that part of the movie was inspired by his wife’s career as a fashion photographer, and he seems to have been amazed to discover that male models actually make less money than female models, an unusual gender-underclass status for men which is examined in various ways throughout the first section of the film. Östlund enthuses about the revelation that beauty can be commodified and generally used to raise class status. The movie literalizes this with Yaya, who’s constantly taking sexy selfies to promote her “influencer” brand that gets her swag and free uber-rich-person access such as the luxury yacht cruise she scored for herself and boyfriend Carl.

But surely nothing is better known than these ABCs of commodifying physical attractiveness?

Well, I may be too hard on Triangle of Sadness. I wish I’d seen it earlier, so I wouldn’t have experienced that unfortunate let-down following a lot of hype and many enthusiastic recommendations. The film has funny and interesting satirical sequences, and if it’s not all I hoped, it’s certainly better than the vast vomitous waves of a hundred percent pro-capitalist propaganda that wash over us weekly at the movies.