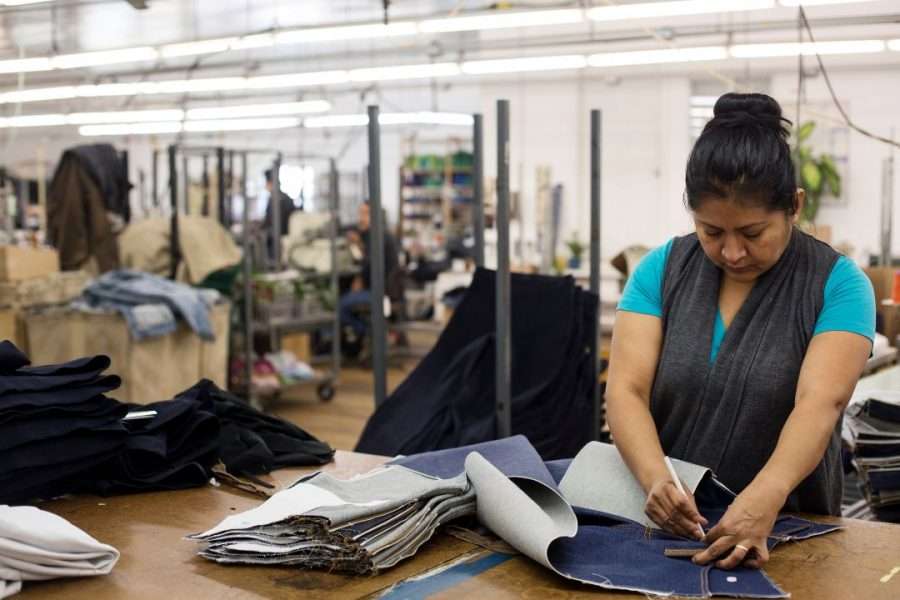 Over 45,000 workers are concentrated in Los Angeles’ Garment District. Long faced with paltry wages and inhumane working conditions, those workers are now taking significant risks to organize for better pay and workplace protections.

When Francisco Tzul arrived in Los Angeles in the 1980s after fleeing a brutal war that was ravaging his native Guatemala, he needed work — both to support himself in an unfamiliar country and to help people who remained at home.

What Tzul found was something that, in a number of American cities, is a thing of the past: a bustling, throwback garment industry fueled by the cheap materials shipped into the city’s port. Los Angeles today is still a center of garment manufacturing: a 45,000-person-strong industry that produces clothing for a number of the country’s biggest fashion brands.

The industry, concentrated in a series of warehouses in Downtown LA, is the city’s second-largest manufacturing sector. It is also a site of extraordinary worker exploitation — and, increasingly, organizing victories that could change the future of the industry.

The garment industry was historically, particularly in East Coast cities, a site of robust union organizing. Today, in LA, that’s not the case. Many of the workers in LA’s garment district are undocumented immigrants from Mexico and other countries in Central America and Asia. The majority are women, and nearly everyone lives paycheck to paycheck and works without union protections — with factory bosses chilling organizing efforts and brands threatening to move production overseas.

The majority are women, and nearly everyone lives paycheck to paycheck and works without union protections.

Many of the factories in the garment district are small, employing fewer than twenty-five people. They’re often rundown and lack running water and bathrooms. Many lack adequate ventilation, let alone air conditioning, which is a major problem in the summer months in the city when temperatures routinely reach into the high eighties and upward. Marissa Nuncio, director of the LA-based Garment Worker Center (GWC), said that workers report suffering from a range of heat-related illnesses and that it is not uncommon for workers to pass out from heat exhaustion on the job. There is often no one employed to clean the factories; Nuncio said that many are infested with rats and cockroaches.

“This is a sweatshop industry still,” Nuncio told Jacobin. “And what that means is what the typical person might envision as a sweatshop: these are cramped, dirty, dangerous factories.”

It’s not just a passive disregard for worker safety that makes many of these factories dangerous places to work. It’s also the lengths factory owners go to skirt safety requirements and protect their profit margins. Factory operators block emergency exits and lock the doors of their facilities or frequently move to avoid inspection by state and federal department of labor officials. Many operate without proper business paperwork.

When US Department of Labor officials were able to conduct a thorough investigation of the LA garment factories back in 2016, what they found was overwhelming: labor violations at 85 percent of the seventy-seven factories they visited. The department ordered suppliers to pay $1.3 million in backpay and damages to workers.

Of course, the main way that factory owners protect their profit margins is by paying workers paltry wages to begin with. In Los Angeles’s garment industry, workers have not historically been paid an hourly or weekly wage but have instead been paid by the piece of clothing they make. Their per-piece rates are so low that some workers in the city were making less than $4 per hour — nowhere near the minimum wage. Tzul said that he worked in the past for per-piece rates of five and six cents, leaving him needing to make thousands of pieces of clothing each week to scratch out enough money to survive.

What they found was overwhelming: labor violations at 85 percent of the seventy-seven factories they visited.

“[Workers] are really treated as an extension of the machine, and production and speed is everything for their livelihood,” Nuncio said. “They’re sewing on these big industrial machines at very fast paces, hundreds of garments a day, which causes punctures, broken needles that can go into an eye — there’s no protection or safeguarding of the machines.”

Factory bosses made their disregard for workers clear in a variety of ways. Tzul said that some employers wouldn’t hand out paychecks until Saturday, ensuring that workers would show up for a weekend shift at the end of a workweek that could stretch past sixty hours. Wage theft was so common that a restitution fund set up by the California State Legislature to pay out claims was nearly bankrupt for years, with some claimants waiting years to receive their stolen wages.

Tzul said that, at various points throughout his career, he has attempted to negotiate his pay directly with factory superiors — only to be threatened over his immigration status.

“They say, ‘I can pay you by the hour or pay your overtime or whatever you want if you give me proof of citizenship,’” Tzul said. “I’m telling you this in a very nice and friendly way, but that’s not the way they say it. They intimidate us.”

The exploitation of workers in the garment industry is not simply the responsibility of the factory owners, many of whom have recent immigration history themselves. They operate at the behest of billion-dollar corporations — familiar fashion brands like Fashion Nova, Forever 21, Charlotte Russe, TJ Maxx, and Ross.

Those companies keep their prices artificially cheap and rake in profits by paying suppliers such low prices for garment orders that the suppliers cannot both pay workers living wages and stay in business. The Department of Labor found that Forever 21 would have had to pay its suppliers 50 percent more in order for the suppliers to pay their workers the federal minimum wage, which is still well below the California minimum.

The effects of those artificially low clothing prices are drastic. Tzul, despite his three decades in the industry, has never been able to afford his own apartment in Los Angeles and has always had to live with roommates to survive. That became a major problem two years ago, when Tzul contracted COVID-19 making masks at a Los Angeles Apparel factory that was taking completely inadequate health and safety protections. He was hospitalized and then kicked out of his apartment by roommates scared of contracting the virus themselves when he was discharged.

The Department of Labor found that Forever 21 would have had to pay its suppliers 50 percent more in order for the suppliers to pay their workers the federal minimum wage.

“It [is] the fashion brands who at the end of the day are responsible for their purchasing practices, and they are the ones that were setting the prices with the manufacturers at really low cost,” Nikki Eclarinal, policy lead at the fashion industry organizing group Fashion Revolution, said. “Ultimately, they knew they weren’t paying enough for labor.”

For years, the brands were insulated from the consequences of their greed. When workers filed complaints over unpaid wages, the manufacturers were held accountable. When the US Department of Labor found labor violations at the garment factories, it was the suppliers who had to pay.

The inequality of that paradigm was one of the reasons why Tzul, despite his knowledge of the risks, decided to begin working with the GWC and speaking out about conditions in the industry. He lost one job because of his advocacy, but he continued to speak out — galvanized, like many other workers, by the abuses garment workers suffered during the pandemic.

Last year, garment workers and their allies like Fashion Revolution scored a major victory: the passage of California Senate Bill 62, also known as the Garment Worker Protection Act. The law requires that garment workers in the state be paid an hourly wage, bans piecework, and holds fashion brands as well as factory owners accountable for wage theft.

The goal of the legislation, which Tzul testified in favor of in Sacramento, was to both secure raises and better conditions for California garment workers in the short term and to change the incentive structure for the brands at the top of the industry supply chain going forward.

Thus far, there is reason for optimism. Even though brands have always threatened to move jobs overseas in response to organizing and new legislation increasing worker power, Nuncio said that some fashion brands have little choice but to continue working with US-based manufacturers who are equipped to quickly turn around seasonal fashions.

But despite all the considerable political progress garment workers have made over the last year-plus, they still have a long way to go to win the respect they deserve from their city’s power structure. That was made abundantly and painfully clear when an audio recording surfaced in early October of three LA city council members and then LA County Federation of Labor president Ron Herrera making racist and dehumanizing remarks while discussing the city’s redistricting process.

In the recording, then LA City Council president Nury Martinez is heard making derogatory comments about Oaxacan immigrants living in LA’s Koreatown neighborhood. Martinez resigned in the fallout over the release of the recording, while Kevin de León, whose council district includes the Garment District, has remained in his seat.

Nuncio noted that neither Los Angeles nor California subsidizes its garment industry like it does the entertainment industry, despite the garment industry’s sizable financial and creative muscle. She also noted that LA’s city planning could in the coming years break up the garment district — where the physical proximity of the factories helps both workers and organizers find jobs and communicate — as well as price workers out of the surrounding neighborhoods.

While LA remains a garment industry hub, workers and organizers believe they must take their fight beyond California to rebalance the distribution of power in a deeply interconnected global industry. The Fabric Act, which was first introduced in the US Senate earlier this year, would make many of the provisions in SB 62 federal law, including eliminating the per-piece wages and holding brands accountable for wage theft throughout their supply chains. The act also incentivizes companies to bring garment manufacturing jobs back to the United States with a tax credit and money to update facilities.

“We have to create a global wall — a global-aligned and unified resistance to these fashion brands that are creating that downward spiral,” Nuncio said. “They’re not confined [by national borders], so we can’t be.”

For Tzul, who nearly lost his life to COVID-19, the battle for dignity in his industry has taken on a new dimension.

“I know exactly who we are fighting against,” Tzul said. “We know that these are huge companies, that the people who own these companies have connections. . . . They are powerful. They have a lot of money. But I feel like I’m still alive.”

This story was supported by the journalism nonprofit the Economic Hardship Reporting Project.