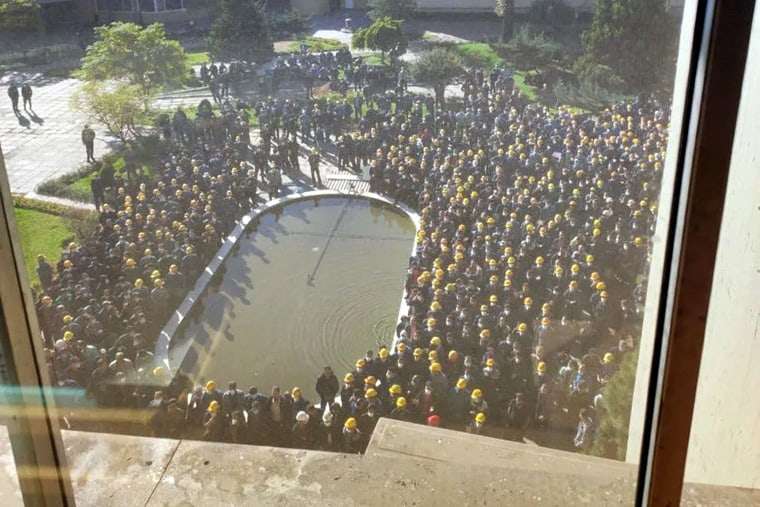 Strikers at the Isfahan iron smelter on Wednesday as part of the Iran protests (Picture: akhbar-rooz.com)

Three days of mass protests in Iran this week have defied murderous state repression—and represented a broadening of the movement’s aims.

People in at least 62 cities, towns and villages took to the streets to mark the anniversary of a mass protest movement in 2019. They were also showing that this new movement—now in its ninth week—is refusing to be forced off the streets.

Dozens of videos from neighbourhoods across the capital Tehran show large crowds chanting in the streets, blocking the roads with flaming barricades through the day and night. Protesters also marched into several of Tehran’s metro stations, with hundreds filling the foyer of the Vali Asr station on one of the city’s main shopping streets.

Protesters reportedly fought long street battles with state forces in the northern city of Behshahr, the Kurdish city Kamyaran and the western city of Bukan.

The day was also branded a “general strike”. This mostly means that small business owners and shopkeepers close for the duration. But metal workers in the city of Isfahan walked out for the whole three days.

And there were also protests and sit-ins at dozens of universities, which are a centre of the movement, closing several campuses and stopping lectures. The Akhbar-Rooz news website reported that state forces entered a campus of Kurdistan University in the city of Sanandaj and opened fire. But, it says, students forced them back out.

State forces attacked the protests this week with live fire, tear gas and mass arrests, killing dozens. Some 15,000 people have reportedly been arrested since the movement began, with the government threatening the death penalty for some of them.

The three days of action appeared to show a pattern for the movement in Iran. There are periods when protests appear to be on a smaller scale, sustained by core groups of activists in neighbourhoods and cities.

But these are punctuated by large set-piece days of action on significant dates drawing in large numbers of people. They show that support for the movement is widespread. What began as protests against laws forcing women to wear the hijab, or headscarf, quickly became a challenge to the regime as a whole.

The law has huge significance as a tool for the regime to justify and enforce its conservative rule. So the protests were a lightning rod for everyone—particularly young people—who demand greater political and social freedoms.

But this week’s protests marking the 2019 movement draw in “economic” demands over poverty, low wages and price hikes. Protests in 2019 began over rising prices, but also quickly developed into calls for the fall of the government.

They were part of a series of protests in Iran over poverty in recent years, including one earlier this year against government cuts to basic food subsidies. And there have also been significant strikes including among teachers, tanker drivers and some oil refinery workers.

Strikes haven’t so far been a large factor in the current movement. But there have been important instances of workers taking action in coordination with major days for the movement.

The Isfahan metal workers struck on Tuesday, Wednesday and Thursday this week demanding higher wages. Sections of contracted oil workers have also struck alongside the protests, as have tanker drivers, though action hasn’t yet spread to the main body of the workforce.

And there have also been reported strikes by petrochemical workers and sugarcane factory workers in recent weeks. The government and bosses have responded with threats and arrests of some union officials—but also by making some concessions.

Bosses reportedly paid out delayed wages just one day before the sugarcane workers were to begin their strikes.

The regime knows that if workers’ demands come together fully with the people on the streets, it could make the movement—already extraordinarily resilient—even more powerful.