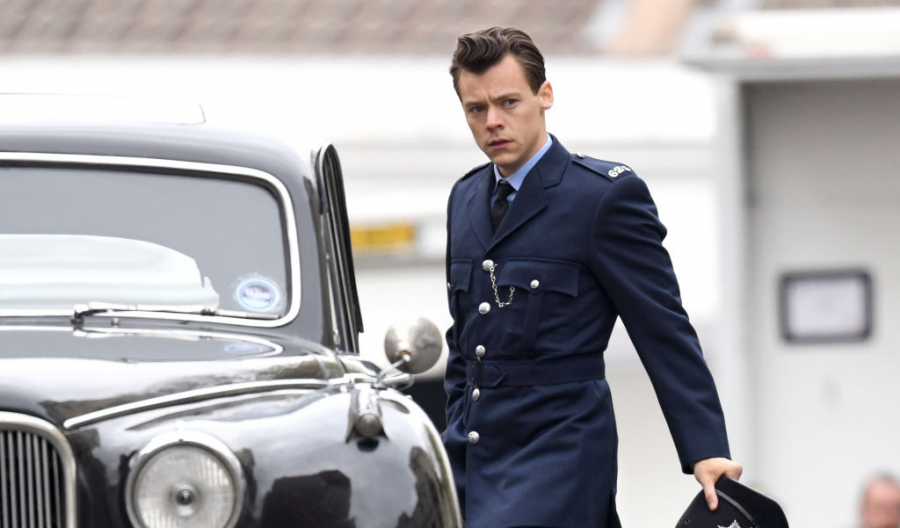 The new movie My Policeman, starring Harry Styles, is inspired by novelist E. M. Forster’s 40-year relationship with policeman Robert Buckingham that began in 1930. The details of that romance are stirring — much more so than what we get in the film.

Harry Styles as Tom Burgess on the set of My Policeman in Brighton, England. (Karwai Tang / WireImage)

There’s a kind of mopey cinema, plodding and lugubrious, that’s often mistaken for artistic sensitivity in creating in-depth character studies and exploring important issues. My Policeman, currently streaming on Amazon, is a good example of this enervating sort of film.

It’s a love story set in 1950s Brighton, England, about the two people contending for the love of the handsome title character, Tom Burgess (Harry Styles). One is an elegant gay man working as a museum curator, Patrick Hazelwood (David Dawson), who’s involved in a passionate affair with Tom. The other is an insecure heterosexual woman, Marion Taylor (Emma Corrin), who becomes Tom’s wife.

Older cast members play the characters later in life, when Marion (Gina McKee) is caring for the gravely ill Patrick (Rupert Everett) over the objections of Tom (Linus Roache), who broke off with him many years earlier. As Marion reads Patrick’s diaries about the two men’s great youthful love, we see it enacted in lengthy flashbacks.

The film goes into dreary detail about naive Marion’s entire ignorance of Tom and Patrick’s affair, her growing suspicions, and the appalling revenge she takes when she finds out she’s been lied to and betrayed for so long. A melodrama of terrible behaviors and grim suffering ensues, giving each character a chance to wound the others in seemingly unforgivable ways that cast a pall over all their lives.

Patrick is the chief martyr, serving a brutal Oscar Wilde–like prison term for “gross indecency” that so thoroughly breaks him, he’s reduced to a nearly inert state of wheelchair-bound endurance as an old man. The once effervescent Patrick, played by Rupert Everett, has almost nothing to do but stare off sadly while remembering things portrayed in flashback. Gina McKee has a similarly pitiable role as older Marion, mostly reading journal entries in a state of pensive melancholy.

It’s an extremely ponderous approach and, at first, it’s actually confusing, because the older actors bear so little resemblance to the younger ones and not much is done in terms of performance or costumes or color scheme or anything to make it clear who’s who.

And none of it had to go this way, either.

Read up on My Policeman and you’ll find it’s based on what sounds like an equally damp and depressing 2012 novel of the same name by Bethan Roberts. It creates a very old-fashioned impression, dwelling glumly on the supposedly inevitable destruction of the tragic lives of gay and bisexual men, involved in the love that dare not speak its name, which also makes the straight women in their lives suffer. We’ve read or seen nine million of these stories, surely. We’ve all made multiple visits to Brokeback Mountain.

But the nonfiction source material for the novel and film turns out to be interesting and bracing as hell. Nothing lugubrious about it at all!

It’s the true story of novelist E. M. Forster’s forty-year love life with policeman Robert “Bob” Buckingham, who was married to nurse May Hockey almost all of that time. The writer of such classics as A Room with a View, Howards End, and A Passage to India, Forster was a physically delicate upper-class aesthete with a type when it came to romance: he consistently fell for tough working-class men. In fact, when he met “my policeman” in 1930, Buckingham wasn’t even Forster’s first policeman. But he was an unusually affable and open-minded cop, with broad interests including an admiration for Fyodor Dostoyevsky.

At first, this relationship, naturally, played hell with Bob’s marriage. As May summed it up after Forster’s death:

I now know that he was in love with Robert and therefore critical and jealous of me and our early years were very stormy, mostly because he had not the faintest idea of the pattern of our lives and was determined that Robert should not be engulfed in domesticity. Over the years he changed us both and he and I came to love one another, able to share the joys and sorrows that came.

Ultimately, they both adored the big, good-natured, and affectionate Bob, who split his time between Forster’s Brunswick Square apartment and May’s Shepherd’s Bush flat. Forster was godfather to the Buckinghams’ son, Robin, and helped console May when Robin died young of Hodgkin’s disease. In his last years, Forster suffered a series of strokes and was nursed by May in the Buckinghams’ home.

She saw quite clearly how ultimately beneficial this three-person commitment had turned out to be, saying, “To him I owe a great debt of gratitude. For his widening of horizons, by meeting his friends, but mostly by his talk.”

And there was no denying the money helped too. Over the years, Forster shared his bounty generously.

Ironically, early in life, Forster had written his own tragic-lives-of-gay-men-that-also-make-straight-women-suffer tale, Maurice, based on painful experiences of his own. The novel was begun in 1913 but not published till 1971, after his death. During that long interval in between, he defied antiquated British law, and with the help of his friends and lovers, worked out a way for them all to be lastingly happy.