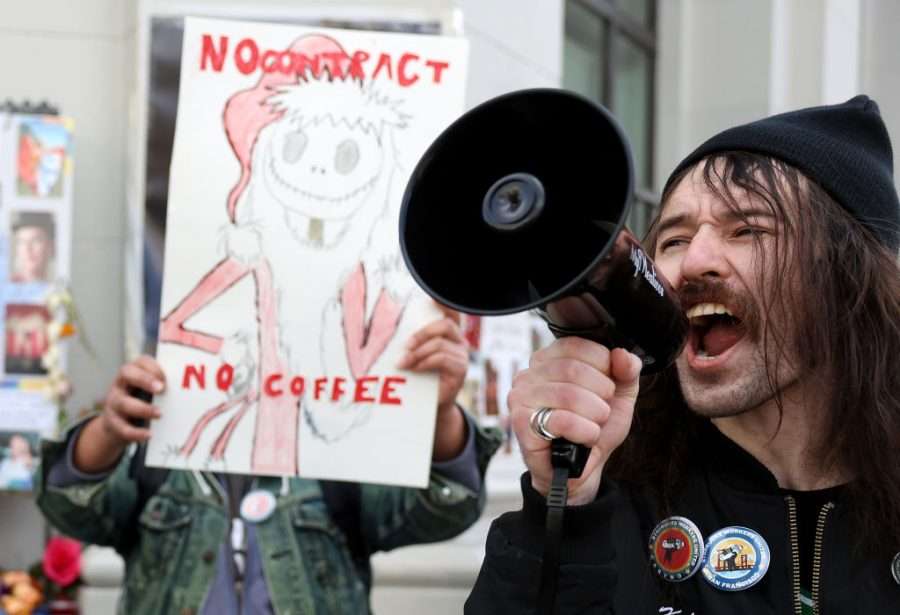 Starbucks has undertaken an unceasing union-busting campaign since the first cafe unionized a year ago. But if the 114 cafes that saw baristas go on strike yesterday for its annual Red Cup Day are any indication, the company won’t be victorious any time soon.

After enduring months of anti-union attacks and stalling on bargaining, Starbucks Workers United (SBWU) attempted to seize momentum back from Starbucks yesterday. Baristas held a one-day strike — a “Red Cup Rebellion” — at 114 stores around the country.

SBWU targeted Starbucks on the day the company annually gives away free red cups to customers. As many as two thousand baristas who are organizing under the umbrella of Service Employees International Union (SEIU)’s affiliate Workers United gave away their own union-messaged red cups at picket lines across the country.

SBWU also received a boost from a concurrently launched solidarity campaign by Unite, the United Kingdom’s largest union, which is now attempting to organize baristas in that country. Starbucks workers in Chile, Brazil, Germany, Serbia, Belgium, and Spain also engaged in solidarity actions.

In the past nine months, SBWU says Starbucks has intentionally short-staffed stores, cut worker hours unilaterally, fired over one hundred fifty union supporters, selectively provided benefits and raises to nonunion stores, installed hostile managers at union stores, and, in one case, accused workers of kidnapping and assault for conducting a march on the boss. The company also accused the National Labor Relations Board (NLRB) of colluding with the union.

Most recently, the company refused to provide workers at the upscale Reserve Roastery in New York City with an inspection report that their store was free from bed bugs and mold after both had allegedly been sighted, forcing a quarter of the staff out on indefinite strike.

“[They want to] make our lives absolutely miserable and regret voting for a union [while] delaying and stalling the contract process,” says Boston barista Kylah Clay.

Starbucks appeared to refuse for months to bargain at all with stores that had won union elections, bargaining it is legally required to do. Now that the company is negotiating with many stores, Starbucks’s representatives have almost immediately walked out of most sessions on the grounds that there were SBWU members joining by Zoom. Previously, the company had agreed to Zoom-based bargaining but appeared to get cold feet when SBWU used the sessions to bring in members from other bargaining units. Each Starbucks store that has unionized is its own bargaining unit.

“[Their] goal is to keep doing this until they hit the year mark and start decertifying the union,” Clay says, an assessment which Workers United confirmed.

If 30 percent of workers at a bargaining unit petition the NLRB to decertify, a vote is held to remove the existing union as representative in that shop. The union must receive a majority of votes to remain the workers’ representative.

While baristas have won elections at over two hundred fifty company-run stores, a concerted effort to decertify them would force SBWU to re-win those votes, essentially moving the campaign back into a state of trench warfare.

The catch for Starbucks is that the NLRB prohibits decertification petitions within a year of the initial approval of a union. But such a counter-organizing campaign could begin relatively soon — the first SBWU union, the Elmwood Avenue store in Buffalo, was certified on December 17 last year. Dozens of others followed soon after, leaving little time for the union.

Starbucks has already managed to substantially staunch new union filings since the initial flurry, though the union notes a slight uptick recently. As a result, if Starbucks were successful in a campaign of demoralizing union workers and driving out strong SBWU supporters, then pushing decertification campaigns, it could put a substantial dent in or even eliminate SBWU as a national presence altogether.

But this isn’t all up to Starbucks. SBWU is planning a coordinated, multiple-city rally on December 9, the first anniversary of the vote at Elmwood.

While strikes at individual stores are routine — the union says there have been about two hundred thus far — yesterday’s action was the first such coordinated labor stoppage on a large scale. It followed a regionally coordinated strike in Massachusetts the week of Labor Day.

On a national level, the network of baristas and its parent union have thus far largely relied on filing over four hundred unfair labor practice charges against Starbucks with the NLRB. The legal work has yielded some results: the NLRB has issued more than three dozen complaints against Starbucks, one of which led to the rehiring of the “Memphis 7” fired baristas after a federal judge ordered it.

And several days ago, as part of an effort to get Ann Arbor barista Hannah Whitbeck rehired, the NLRB’s Michigan region filed in federal court for a nationwide cease and desist order that would require Starbucks to stop firing workers for union support.

But such efforts tend to be slow moving and out of the public eye, whereas actions like the Red Cup Rebellion allow workers to publicly go after the company. Moreover, the NLRB is an administrative body that can’t itself enforce penalties on Starbucks; it relies on the court system to do so.

As a result, yesterday marked a return to the court of public opinion for SBWU. “[We want to] talk to our customers [and] we can’t really have the most open and honest conversations about our workplace [while at work],” says Clay.

Where all this goes next is unknown for now. It is possible that Starbucks could succeed in gutting the union within the next year. But yesterday’s Red Cup Rebellion showed that if the company does make moves to make that happen, it’s not going to happen without a fight.