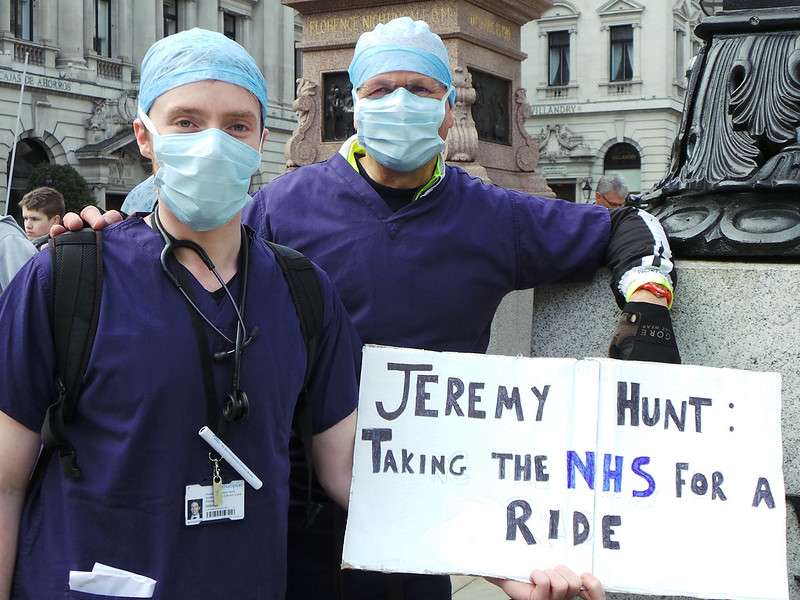 Hunt’s autumn statement is a disaster for millions of people. But the Tories are weak and divided, writes Colin Wilson, and the growing strike wave can defeat them.

After twelve years of Tory rule, the best that Jeremy Hunt can offer is biggest fall in living standards since records began in 1956. Fuel bills are to rise yet again next spring. Unemployment is set to rise by half a million, as real wages fall by 1.8% this year and 2.2% next year.

But while millions of people suffer poverty and ill health, the bonanza for the wealthy continues. The Chief Execs of Britain’s top hundred companies were paid an average £3.4 million in 2021. Boris Johnson earned £276,000 for a single US speech last month.

This is the truth behind claims that the Tories are powerless in the face of the financial markets – the money for public services is there in the accounts of corporations. Shell made a profit of $9.5 billion in a single quarter this year, while 7 million people wait for hospital treatment. The Prime Minister and his wife are worth £730 million, while a 2-year-old boy in Rochdale dies because his home is covered with mould.

The Tories tell us that 10 percent rises in benefits and pensions show they care for vulnerable people. But with inflation at 14 percent if you include mortgage costs and 11 percent if you don’t, these increases are actually cuts in real terms. Benefits and fuel support changes mean an extra £8 a week for the poorest families – but that will be quickly consumed by rising food and fuel prices. £3 billion for the NHS may sound like big money – but it’s less than 2 percent of total health and care spending. Meanwhile, Germany spends 39 percent more on health than Britain, and France spends 21 percent more.

Hunt blames Russia for the state of government finances, and the Tories talk about “headwinds” from the global economy. But the US economy has grown by over 4 percent since the autumn of 2019, with both Italy and France growing over 1 percent – the British economy has shrunk. No other country is facing the kind of permacrisis that has overtaken Britain. Faced with the fuel crisis in July, the French government nationalised EDF and capped price rises at 4 percent, while we’ve seen prices more than double.

If there’s no chance of the Tories nationalising fuel companies, there’s even less chance of Labour doing that, even though it would cost less than subsidising gas and electric costs. But nationalisation would mean rejecting profits and markets as a way of meeting human needs, and the consensus between this absurd government – which eight weeks ago had exactly the opposite economic policy – and this pointless opposition is that the market rules at all costs.

Labour’s spinelessness is even more ludicrous when you see that the Tories are divided and nervous. 20 points behind in the polls, with national strikes on the way, the government can’t heed right-wing calls to privatise the NHS or cut taxes on the rich. They can imagine the wave of anger such policies could unleash, and it’s worried them into their small concessions on NHS spending, benefits and pensions. But the hard right are still pushing for those policies, so the Tories are divided – Jacob Rees-Mogg criticised the government on TV on Thursday night, while the IEA, the think tank behind Tory libertarians like Truss, called it “a recipe for managed decline” and argued that “ordinary workers have been clobbered”.

The Tories are telling us they are united and the competent grown-ups are back in charge, but Sunak has already come under fire for rehiring Braverman, had Gavin Williamson resign and been forced to launch an investigation into bullying allegations against Deputy PM Dominic Raab – all this within the first month of his premiership. The omnishambles that began under Johnson and accelerated under Truss is set to continue.

If the situation is grim when it comes to official politics, there’s more hope when it comes to strikes and protests, as Raymond Morrell highlighted on this site last week. If you look at the Unite website, you see strike action winning double-digit pay rises in one workplace after another in the last week – 11 percent at Heinz, 20 percent at Stagecoach Hull, 13 percent at Fox’s Biscuits and over 14 percent for Liverpool dockers.

Those local strikes are to be joined by national ones as nurses in the RCN vote to strike for the first time in their history – the normally moderate union yesterday gave the government five days to begin negotiations, or else they will announce strike dates in December. 70 thousand UCU college lecturers are preparing to strike next week, 88 percent of sixth form teachers have voted for action, and Royal Mail workers in the CWU will be walking out on six days in December. Strikers need to be calling for coordinated future action between unions, and for maximum pressure to be put on the employers – the CWU leadership is absolutely right to continue strikes while negotiations take place, maximising the union’s strength at the negotiating table.

If you aren’t on strike, do collections and visit picket lines. Hundreds of thousands of workers, striking and protesting together, are the force that can kick out this wretched Tory government – and then make clear to Starmer that we won’t accept austerity from Labour either.