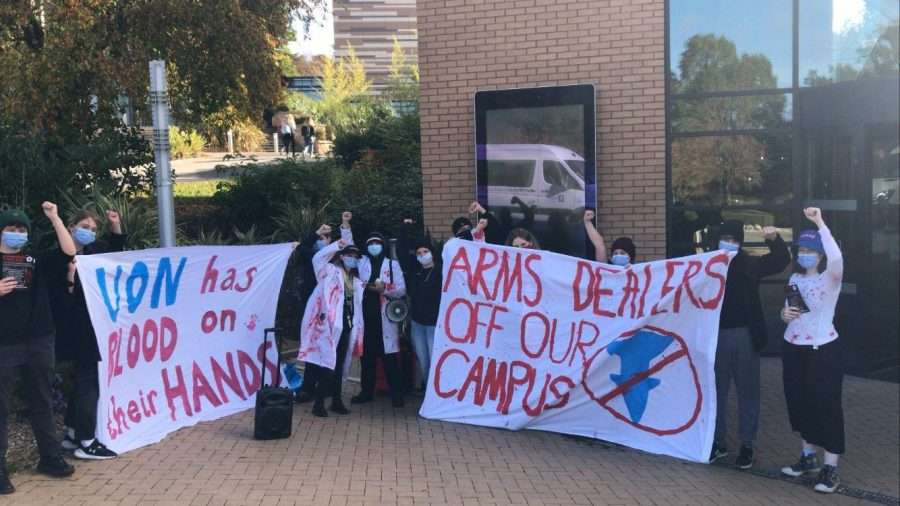 Last month saw a wave of protests in UK universities against the presence of arms traders and army recruiters. Cash-strapped educational institutions are becoming ever more dependent on the military for funds — subverting the very purpose of education.

Student activists disrupt a career fair at the University of Sheffield. (@dED_ucation / Twitter)

When it isn’t busy changing prime minister, the United Kingdom is a world leader in the arms trade. It’s home to well-known firms like BAE Systems and Rolls-Royce, as well as Europe’s largest missile producer, MBDA. The country is the world’s third-largest weapons exporter by sales, and every two years it hosts DSEI, the world’s biggest arms fair, inviting dignitaries to see the best killing machines money can buy.

Universities sit at the heart of this trade — and often students are the first to understand the impact they can make on it. In the United States in the 1960s, the Berkeley Free Speech Movement pioneered tactics like occupations of campus buildings that set the stage for mass resistance to the Vietnam War at colleges across the country. Today, students in Britain are taking up their mantle.

October saw seven protests and occupations across five different UK universities over the arms trade and the military’s presence on campuses. Students at universities in Lancaster, Warwick, Nottingham, Bristol, and Sheffield disrupted careers fairs and recruitment events where arms companies and the military sought to tempt graduates.

Adam is a student involved in Sheffield Action Group, which has been protesting the militarization of education. He defines it as “the hostile application of education spaces for military purposes.”

Enmeshing themselves in higher education is important to arms companies and the military. It helps them to develop new technologies, pick up recruits, and make themselves indispensable to universities’ finances and graduate employment statistics. The legitimacy that comes with working with prestigious educational institutions also gives them a facade of humane respectability. Jinsella from dED (Demilitarise Education), a UK group equipping students to challenge their universities’ links with the arms trade, explains:

Arms companies use students and their institutions to not only further their own production, but to normalize militarism and armament as a positive peacekeeping solution . . . defense companies rely on building public support from within education to keep profiting from deadly conflict.

Britain’s universities have always been important to its military and foreign policy and are steeped in imperialist history. The School of Oriental and African Studies was key in educating colonial administrators, and elite universities have produced many of the military officers in the British Army. Add to this that, since 2010, universities have been chronically underfunded by the tuition fee system, and you have the perfect storm for arms companies to worm their way into higher education institutions.

“They can’t get enough funding from the government, so they’re having to reach out to these arms companies and get funding from them instead” says River Butterworth, education officer at the University of Nottingham Students’ Union.

“I asked at the beginning of the year about demilitarizing, and the university was basically like — OK, work out how we’re going to finance the whole of the engineering department then.”

It doesn’t end at STEM subjects either: militarization finds its way into every aspect of university life. BAE Systems sponsors the Centre for Ethics and Law at University College London, where Joanna Talbot, BAE’s chief counsel, sits on the advisory board.

Arms companies offer research or “strategic” partnerships where they provide funding for research and facilities. One such example is the University of Sheffield’s Advanced Manufacturing Research Centre, which boasts extensive links to the world’s biggest arms manufacturers, like Rolls-Royce, Boeing, Airbus, and BAE Systems. According to a Freedom of Information request filed last year, the University of Sheffield topped a list of British universities that take money from the arms trade. Between 2013 and 2020, Sheffield took £47 million — more than Oxford and Cambridge combined.

River explains that at Nottingham “Rolls-Royce has Master’s and PhD students who are funded to basically do research for them, getting people as soon as they finish undergraduate degrees to immediately go and do funded things which will be used in the arms trade. It’s just basically using university students to do Rolls-Royce’s work.”

Pipelines to careers in the arms industry are set up through apprenticeships and graduate schemes, which allow heavily indebted graduates to put their talents to producing weapons. There are also a range of incentives for students to join the army itself. Scholarships, officer training corps, and the promise of a job after graduation can be a tempting offer to some. River says that by inviting these organizations onto campuses, universities are “deliberately pushing people into jobs that create death and destruction, no matter how the university tries to phrase it.”

When students and staff are complacent about militarization, universities are left free to make these partnerships. River explains that the demilitarization campaign at Nottingham died down for a few years — and the university “realized they can just push through whatever they want.” Yet not everyone is indeed accepting such ties.

One example is Palestine Action. A prominent direct-action group, it has been targeting Israeli arms company Elbit Systems, a firm with production facilities across the UK.

Sheffield Action Group, a queer youth–led collective, has pulled off eight occupations at the University of Sheffield this year. One came last month, in the university’s £82 million engineering building, in protest of the university taking money from the arms trade and allowing weapons companies at careers fairs. On the fifth day, the occupation was evicted by High Court enforcement officers. But this came too late for the arms companies: they had already backed out of a career fair being held that same week. Sources inside the university have told Sheffield Action Group they are now looking at ways to cut ties with these companies without being sued.

“The military-industrial complex that the University of Sheffield is partnered with is responsible for enabling countries like Saudi Arabia to commit war crimes by supplying it with the weapons that it needs for its illegal bombing campaigns,” Adam explains.

BAE Systems, among other companies the university is partnered with, has sold billions of pounds worth of fighter jets using Rolls-Royce engines to Saudi Arabia. These have been used in Yemen where schools and hospitals have been bombed, creating what the UN calls “the worst humanitarian crisis in the world.”

This connection between his university and war crimes in the Middle East is why Adam feels it’s so important for students in the West to resist and protest militarization. “It’s British bombs, British aerospace, British missiles, and British weaponry that’s being developed by companies like BAE Systems and Rolls-Royce. These are then being used around the world to commit war crimes and illegal military occupations, like in Palestine.”

In recent years, UK universities have been making noise about “decolonizing.” Yet this rhetorical emphasis is jarring in the extreme when these same institutions conduct research that enables conflicts in the Global South. “We can’t decolonize with the military in our universities, because currently what we’re doing . . . is enabling imperialism around the world,” says Adam.

It reproduces the same colonial and imperialist ties the UK has had. Universities are fundamentally linked to imperialism . . . look at Iraq. These wars are directly linked to the university. Who’s using this research? It’s not Palestinian people and resistance using this research when they’re getting bombed by drones. Western countries can produce weapons and go and invade, and have the research to make more systems for killing people and the power over where the research is going.

River was part of similar actions last month. In the space of two weeks, Demilitarise Uni of Nottingham dramatically disrupted a career fair, with participants dressed in lab coats daubed with fake blood. They used megaphones to loudly tell students about the companies that had been invited along and disrupt the whole event. The following week, they pulled a similar stunt and secured the cancellation of a career event organized by the Royal Air Force (RAF). “People got emails about when the RAF were coming onto campus and what room it was going to be in. So we just went there an hour in advance, sat in the room, and just locked it,” River says casually.

River takes this further and sees it as a process of reclaiming power from the strict university hierarchy:

It changes that structure. We don’t have ownership over universities or these decisions being made at the top, and having those demilitarized demands listened to changes . . . where that decision-making is coming from. It’s coming from concerned students and concerned staff.

Students have the power and staff have the power to move the university in the direction that actually proposes education as a fundamental force to change the future, rather than it being complicit in all the same things that businesses, the government, banks, investment firms are. Education doesn’t have to be like that.