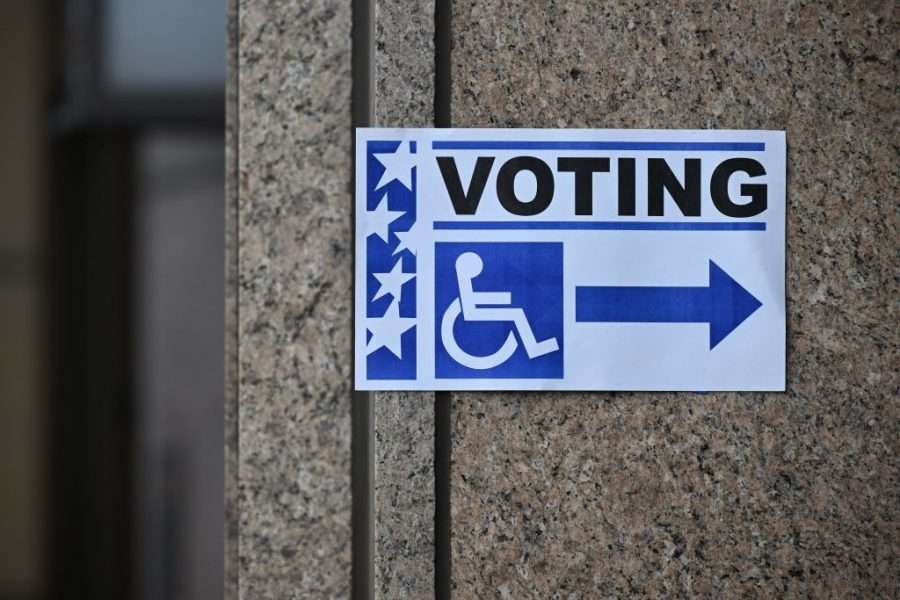 People voted blue in the midterms because they trust the Democratic Party to preserve democracy. From accessibility for disabled voters to protecting the vote-by-mail process, Democrats should step up and prioritize voting rights wherever they can.

A sign points to a wheelchair-accessible polling station during early voting ahead of the US midterm elections in Los Angeles, California, on November 1, 2022. (Robyn Beck / AFP via Getty Images)

Amanda Gadd arrived at the fire station in Great Barrington, Massachusetts on Election Day hoping that this time things would be different. When she voted in the primary, Gadd, who uses a wheelchair after five years of being on crutches, found that her polling place did not have a wheelchair-accessible voting booth. She was forced to cast her ballot at the end of a table where people were lined up waiting their turn. Her vote was exposed, and she observed that other voters were indeed looking at her ballot.

Gadd called city officials and let them know about the issue, expecting it would be fixed by the general election. It was not. “I was once again forced to vote with ten to eighteen people standing around me waiting for their turn at a private voting booth,” Gadd told Jacobin. “Someone I work with was able to read my ballot.”

In 2016, the US Government Accountability Office looked at a sampling of polling places around the country and found that an astonishing 60 percent featured one or more impediments to people with disabilities. The same study found that 65 percent had an accessible voting station, but it did not meet the requirements for casting a private vote.

This midterm cycle, Democrats stood tall in the face of the “red wave” that never was. Abortion rights played a big role in the party’s relative success, but another major motivating factor for voters seems to have been the preservation of democracy itself: every single election-denying Republican candidate (i.e. those who believe Biden’s victory over Trump was illegitimate) who ran in a swing state lost their race. Democrats can now claim a mandate for protecting voting rights, an agenda that can and should include accessibility at the polls.

Americans with Disabilities Act (ADA) violations at polling places may seem like a minor issue when it comes to voter access, especially with absentee ballots expanding in states across the country. But bear in mind that universal absentee voting is relatively new for most states, and Republican-controlled legislatures have pushed hard to restrict mail-in ballots and routinely attempt to throw out votes on flimsy pretenses. And these issues aren’t just limited to the red states: even in blue Massachusetts, the fear that a mail-in ballot might not be counted motivated Amanda Gadd to vote in person. She told Jacobin:

I live in a small town and can see someone not bothering with the mail-in ballots for ease or wanted outcomes. Few would bother to notice or question it — same as with the handicapped-accessible voting booth. If I vote in person I have control of my vote all the way to the counting.”

With the governor’s office reverting to Democratic Party control again after eight years, it should be a simple matter for Massachusetts to ensure ADA compliance across the state. All the party has to do is prioritize it — and they should, both on principle and because, given voters’ feelings about preserving democracy, protecting voting rights is good politics.

Becoming the Party of Voting Rights

Beyond the specific concerns of disabled people, the United States’ voting rights situation is quite dire. Time magazine profiled seven voters who faced obstacles in casting their ballot during the midterms in Georgia, and their stories were indicative of the breadth of the issue. Some were eventually able to overcome their obstacles, like the college student who, because of a lack of public transportation, found herself three hours from her polling place. She was able to catch a ride with a friend. Others, like a forty-six-year-old woman on probation who under Georgia law is barred from voting until 2029, have no such work-around.

With Republicans winning back the House with a narrow margin, there is little hope for federal voting rights legislation in the next two years. However, Democrats can still make moves to protect voting rights at the federal level. Biden, for instance, can appoint two new members to the Postal Service Board of Governors when the terms of two Trump appointees expire in December. This would be the first step in getting rid of Postmaster General Louis DeJoy, the Trump-backed ex–logistics CEO who’s made it his mission to gut the US Postal Service and sabotage absentee voting. Bringing in a new head for the post office and restoring its capabilities is crucial for voters to trust mail-in ballots.

Democrats in blue states have no excuse not to prioritize expanding voter access. And while it will be an uphill battle in red and purple states, it’s not undoable. Democrats should take advantage of some of their state-level midterm wins to force the issue. In Arizona, for example, incoming Democratic secretary of state Adrian Fontes — who earned more votes than any Democrat in the state other than incumbent and returning senator Mark Kelly — will have control over elections. Fontes beat an election denier, giving him a clear mandate to protect the democratic process.

The 2022 midterms showed that election denialism is an albatross around the neck of the Republican Party. Democrats can use that leverage to expand voting rights where they can and by as much as they can. It must be a coordinated effort, with national resources directed to state parties and local organizations. With the explicit threat of the far right subverting democracy, there is an opportunity to get independents and maybe even a few Republicans on board with protecting and expanding voter access.

Amanda Gadd’s story shows that there is work to be done in blue states as well. Gadd eventually received an assurance from the town that her polling place will have a table available for private wheelchair-accessible voting by the next election. It took several slightly contentious emails for her to get that assurance, and in the process she learned that there is only one person in the secretary of state’s office charged with overseeing ADA compliance, which is not nearly enough to ensure every polling place meets requirements. While the state has made strides in disabled voter access, it’s been mostly focused on absentee balloting. The lack of oversight for in-person voting accessibility may seem like a minor problem, but it’s also an unnecessary one that’s easy to fix. Any party committed to voting rights would solve it immediately.

Democrats have been able to use the threat of Trump and Trumpism returning to power to raise massive amounts of money from their base. Instead of using that war chest on expensive ad buys and ineffective consulting agencies, they would be better served putting their resources into fighting for voting rights in red and purple states and making sure that blue states are doing everything they can to ensure every voter can cast a safe, private, and independent ballot.