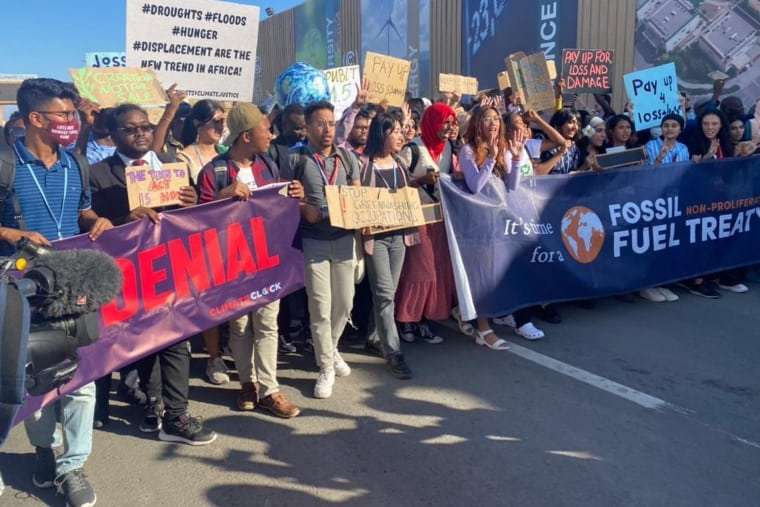 The Cop27 climate conference has disgracefully failed to take even the most basic action over climate chaos. Instead of tackling urgent problems, it will delay and limit action by those in power.

In the course of the 27 Cop conferences, there has never been a formal agreement to reduce the world’s fossil fuel use. And there wasn’t one in Egypt. There were a record 636 fossil fuel lobbyists at Cop27.

The approved deal did not contain a reference requested by India and some other delegations to phasing down use of “all fossil fuels”. Even “phasing down” was too much to swallow. It instead called on countries to take steps toward “the phasedown of unabated coal power and phase-out of inefficient fossil fuel subsidies”, as agreed at the Cop26 Glasgow summit. That means nothing.

The term “low emissions energy” was thrown into the agreement in reference to efforts to develop carbon capture and blue hydrogen production. Both methods are attempts to reduce CO2 emissions but keep the fossil fuel industry very much alive.

And the hope that this Cop27 would lead to a plan to reduce temperature rises to under 1.5 degrees Celsius above pre-industrial levels faded fast as the conference went on. Already the world has warmed by as much as 1.2 degrees, but at Cop27 big oil and gas producing countries stood in the way of reducing fossil fuel use and so reducing temperatures.

Frans Timmermans, vice-president of the European Commission, told journalists that some countries that made negotiations difficult on this subject included Brazil, China and Saudi Arabia. But Britain and the European countries are also climate criminals historically and today as they produce and use fossil fuels and outsource some of their dirty energy use to Global South countries.

Another pledge to reach the peak of global emissions by 2025 was also not included in the final agreement.

One of the biggest debates at Cop was about whether poor countries, which are disproportionately impacted by climate change, should be given more money to deal with the effects of the crisis.

On Friday of last week, the European Union (EU) agreed to establish a new fund for a “loss and damages” fund. This was celebrated by some as a step forward. But support for this type of fund only came after the US made sure to establish that other countries would not be legally liable for climate damages in other parts of the world.

States will also not be legally bound to give to this fund and will donate on a voluntary basis. And rich countries’ pledges to give to poorer ones have often been empty promises.

Currently, 8 million people in the country are suffering from food insecurity and one in five children faces acute malnutrition.

Cop 27 was a platform for polluters to water down climate promises to satisfy fossil fuel bosses. It’s urgent to continue protesting against fossil fuel capitalism and to build a bigger, militant climate movement.