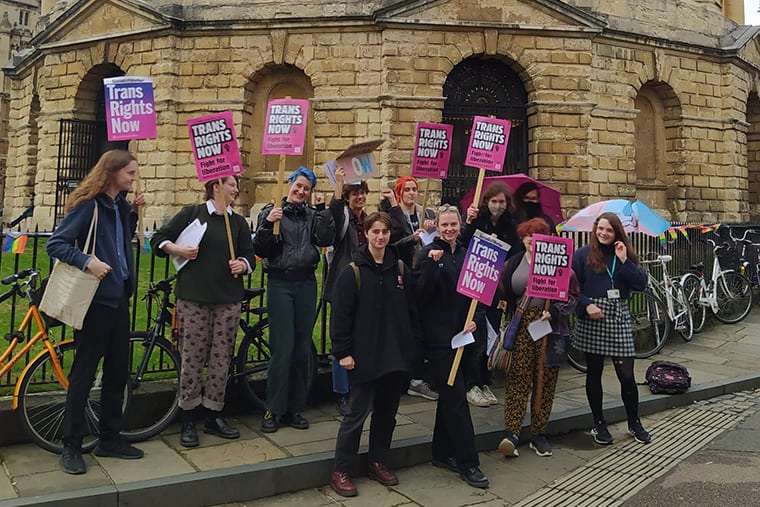 Rishi Sunak is further hammering away at trans rights. Sunak plans to “review the Equality Act to make it clear that sex means biological sex rather than gender”. The limited protection granted to trans people in the Equality Act could be ripped apart.

Currently the Equality Act protects people on the basis of sex and “gender reassignment”. It means trans people are protected regardless of medical transitioning or holding a Gender Recognition Certificate.

And they as they are deemed as “self-identifying”, trans people are able to access single‑sex spaces such as shelters, bathrooms, and hospital wards. Sunak wants to undo this.

It follows the plans to cancel reform of the GRA that would make the process of transitioning easier.

Meanwhile activists gathered in Liverpool, Oxford and Edinburgh last week in advance of Trans Day of Remembrance. In Liverpool students were joined by speakers from the UCU union, the Liverpool docks, the Amnesty Society and Reclaim Pride.

Aster, a student in Oxford, told Socialist Worker, “The Socialist Worker Student Society felt that organising such a rally was necessary given the climate of trans rights in Britain.” Further events were planned this week in Bristol and Leicester.

Defeat for move to sack a trans-friendly leader

A small group of gender-critical activists failed last week in an attempt to oust the trans-friendly chair of the Society of Authors (SOA) management committee, author Joanne Harris.

A motion, proposed by Julie Bindel and others was put on the spurious grounds that Joanne had failed to be even-handed in her defence of union members. In fact it was a thinly veiled attack on Joanne’s support for trans people.

The group claimed hundreds of members of the SOA supported them.  But in the end, despite a determined campaign, only 147 from a total membership of over 12,000 voted for the motion. It was defeated on the night as 608 of us opposed it.

The SOA said, “We look forward to continuing to work with Joanne Harris as chair and the rest of the management committee.”

One lesson to be drawn is that despite some extremely high profile supporters, with social media followers numbering tens of millions, gender-critical views are actually held by a tiny minority.

The Society of Authors is the main trade union for writers and illustrators. This includes fiction and non-fiction.

President Andrea Egan spoke out against the war on rights generally, and specifically on trans people. She told conference there was a “collective responsibilty” to “continue to fight for a ban on conversion therapy and to reform the gender recognition act.”

Speaking of the attacks on trans people, Hannah said “the demonisation of trans people is constant and exhausting. It paints us a threat simply for existing.” The conference also condemned Tory plans for deportations to Rwanda.