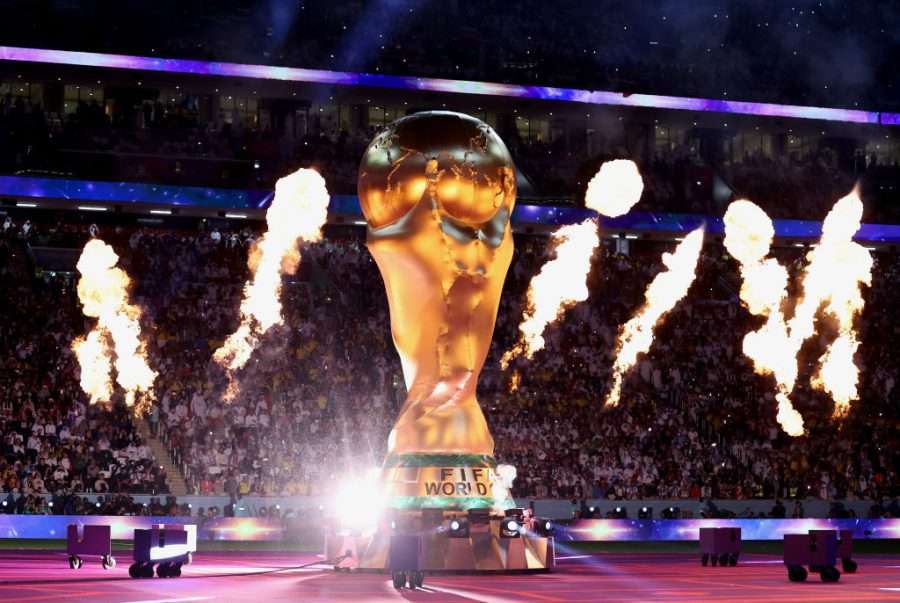 Qatar’s World Cup is the culmination of decades of football capitalism – a victory for big corporations and repressive regimes, and a tragedy for the fans and workers who make the game.

Fireworks explode during the pre match ceremony prior to the FIFA World Cup Qatar 2022 Group A match between Qatar and Ecuador at Al Bayt Stadium on 20 November 2022. (Lars Baron / Getty Images)

In one sense, the Qatar World Cup is not as much of an outlier as it may seem. Repressive regimes have long used the tournament to burnish their image, the golden glow of the trophy temporarily dazzling those at home and abroad to injustice, cruelty, and abuse.

In 1934, Benito Mussolini lured the tournament to Italy and used it as a sort of festival of fascism. In 1978, it went to Argentina at a time when the right-wing military junta of Jorge Rafael Videla was waging the ‘Dirty War’ and murdering tens of thousands of its own citizens. The final at the Estadio Monumental was held a few blocks away from the Navy School of Mechanics where political prisoners were tortured, so close that, according to survivors, they could hear the crowd cheer.

In 2018, the World Cup travelled to Russia despite well-documented human rights abuses, laws discriminating against LGBTQ+ people, and the spiralling authoritarianism of Vladimir Putin. Four years later and, following Russia’s invasion of Ukraine, FIFA has banned the Russian national team from all competitions, with images of Gianni Infantino, the FIFA president, grinning inanely alongside Putin at the final at the Luzhniki Stadium a lasting testament to the organisation’s amorality.

As with Qatar 2022, all of those tournaments were dogged by accusations of corruption. The injustices associated with this World Cup are egregious—the systematic and often lethal exploitation of migrant workers, alleged forced labour, arbitrary detentions, and criminalisation of same-sex relationships among them—but they are also part of a long line of horrors overlooked by those who run football.

In other ways, though, Qatar 2022 has had a transformational effect on the game. For FIFA, the decision to award consecutive tournaments to Russia and Qatar back in 2010 led to a reckoning which has swept away some of the world governing body’s most influential figures. Of the 22 voting members of the FIFA executive who participated in that decision, 16 have been investigated for, or implicated in, alleged corruption or unethical behaviour (albeit not necessarily connected to the bidding process). Sepp Blatter, Infantino’s predecessor as president, was finally forced out in 2015 after 17 years as football’s most powerful man. Michel Platini, the former UEFA president, Jack Warner, FIFA’s former vice-president, and Jerome Valcke, FIFA’s former secretary general, are among the other notable casualties of the last decade.

While revelations about the culture of corruption at FIFA at the time of the bidding process have made it clearer than ever—and to a wider audience than ever—how money has defined the landscape of modern football, public revulsion at the scandals and inner machinations of the world governing body is part of a much bigger picture. While there was a fierce backlash to Russia hosting the World Cup—especially after the passing of homophobic legislation in 2013, then the start of the war in Donbas and the annexation of Crimea the following year—FIFA was at least able to maintain an internal sporting logic: Russia had helped to produce great teams at international level as part of the Soviet Union, reaching one World Cup semi-final and three quarter-finals, had a well-attended domestic league and had already shown it could host one of football’s biggest global events, with the 2008 Champions League final held in Moscow.

If the backlash against Qatar 2022 has been even more intense, that may be because FIFA has never been able to produce a credible rationale for the tournament that isn’t financial. In a pledge which, after a decade of human rights organisations drawing attention to migrant workers dying in the heat of the day, seems tragic and surreal, Qatar won its bid on the promise that air conditioning in stadiums would allow the tournament to be held in June and July as usual, brushing over the fact that fans would still be outside in temperatures over 40C before and after matches.

When, in 2015, FIFA finally made the inevitable decision that the World Cup would have to be staged in winter to protect the safety of players and supporters, it confirmed what all but the most gullible already knew: one of the core premises of the bid, a summer start date, was untenable. The Qatar national team has never qualified for a World Cup, the domestic league is sparsely attended and much of the country’s football infrastructure has had to be built from scratch, an undertaking which has left many workers dead or seriously injured. Even Blatter, a man not known for his self-awareness, has admitted the tournament was ‘a mistake’ and ‘a bad choice’, though not, in his mind, because of inhumane working conditions, but because ‘football and the World Cup are too big’ for the country. Other than Qatar’s vast wealth, it is hard to understand why FIFA has allowed any of this to happen.

To that backdrop, the influence of money on the game has never been starker. For the first time in history the World Cup will be held in November and December, causing enormous disruption to the club football calendar across much of the globe. Many domestic leagues have been forced to start earlier, finish later and compress their fixture lists, leaving fewer rest and recovery days for players. The tournament itself has been shortened, cramming 64 games into 28 days when, for comparison, Russia 2018 and Brazil 2014 both spanned 31. There has been almost no time for warm-up friendlies, while players who reach the latter stages face the prospect of making an almost immediate return to domestic competition once their World Cup campaign is done. The tournament, and indeed the entire football season, has been drastically altered before our eyes.

The congested schedule could have a severe impact on player welfare, increasing the likelihood of both minor and major injuries. Jamie Carragher, the former Liverpool and England defender, has accused those who voted to stage the World Cup in Qatar of treating players ‘like cattle’. FIFPRO, the international players’ union, has criticised ‘the unprecedented workload demands placed upon the game’s leading players ahead of the [tournament]’. It shouldn’t need restating that there would be no football without footballers, yet the game’s world governing body has facilitated a tournament which, to quote FIFPRO’s latest report on player workload, has left them ‘forcefully pushed past acceptable limits… unsustainable workload demands continue to harm players’ physical and mental health, in addition to putting their performance and future career longevity at risk.’

In that sense, even the basic norms for those on the pitch, the parameters of players’ wellbeing, have been manipulated to suit the hosts. Throw in the prohibitive cost of flights, accommodation and match tickets for many fans—there have been widespread reports that Qatar has paid for influencers to attend in an attempt to drum up an artificial atmosphere, reducing even the fan experience to a transaction—and it’s hard not to feel like this World Cup has some superficial elements of a football tournament but is primarily a show of wealth and power.

Again, it is important not to view Qatar 2022 in isolation. Over the last few years, there have been constant attempts by the super-rich to radically reshape football in service of their own interests. FIFA may have backtracked on the idea in the face of furious opposition, but until recently Infantino and his allies were pushing for the World Cup to be held every two years. While Infantino, in one of the most tone-deaf interventions imaginable, had the gall to suggest that a biennial tournament would give more opportunities for new hosts and, as such, ‘give hope to Africans so that they don’t need to cross the Mediterranean in order to find maybe a better life but, more probably, death in the sea’, there was only one plausible motivation for the idea.

Selling the broadcasting, licensing, and marketing rights to the World Cup and striking associated sponsorship and commercial partnerships provides FIFA with much of its revenue. Qatar 2022 is set to generate over $6 billion for the organisation which, the toxic culture in which the tournament was awarded aside, explains their desperation for it not to be derailed despite the countless controversies since 2010. The majority of that revenue is then distributed around the world for ‘development’ purposes, making it crucial to FIFA’s internal politics. Doubling the number of World Cups, though it would throw the global sporting calendar into disarray and diminish the tournament’s significance, would have been an act of self-enrichment on a colossal scale.

The same goes for the attempted European Super League breakaway last year, when 12 of the world’s wealthiest clubs and their assorted owners and presidents—most of them billionaires—decided they would carve up European football among themselves. In case anyone was in doubt as to the motives of those who tried to upturn hundreds of years of history, heritage and competition on a whim, Joan Laporta, the Barcelona president, who is still pushing for an ESL along with his counterparts at Real Madrid and Juventus, has laid it out: ‘For starters, there would be a bonus of €1 billion for the founding clubs… per season, we could get around €300 million annually in this competition.’ Florentino Perez, the Real Madrid president, let the mask slip when he suggested that the ESL would open up the possibility of shortening the length of games from 90 minutes to appeal to new audiences. In the relentless pursuit of profit, an entitled elite are willing to literally rewrite the rules of football.

Qatar 2022 may be an extreme example of how money is distorting the game, but it is still part of a wider pattern. Football has long been beholden to the wealthy, but they are now trying to remake it in their own image in ways that have never been seen before. It would not be a surprise were more winter World Cups to materialise in the near future, with Saudi Arabia expected to lead a joint bid for the 2030 edition of the tournament alongside Greece and Egypt. That could be another nightmare in the making from the perspective of equality and human rights.

Having found themselves in charge of the world’s most popular sport, those who run football seem determined to make it unrecognisable. Ultimately, for as long as administrators and organisers care about money above all ethical, social and sporting concerns, the wealthy will continue to dictate fundamental changes to the game until it is something else entirely, intended to be enjoyed by only a select few.