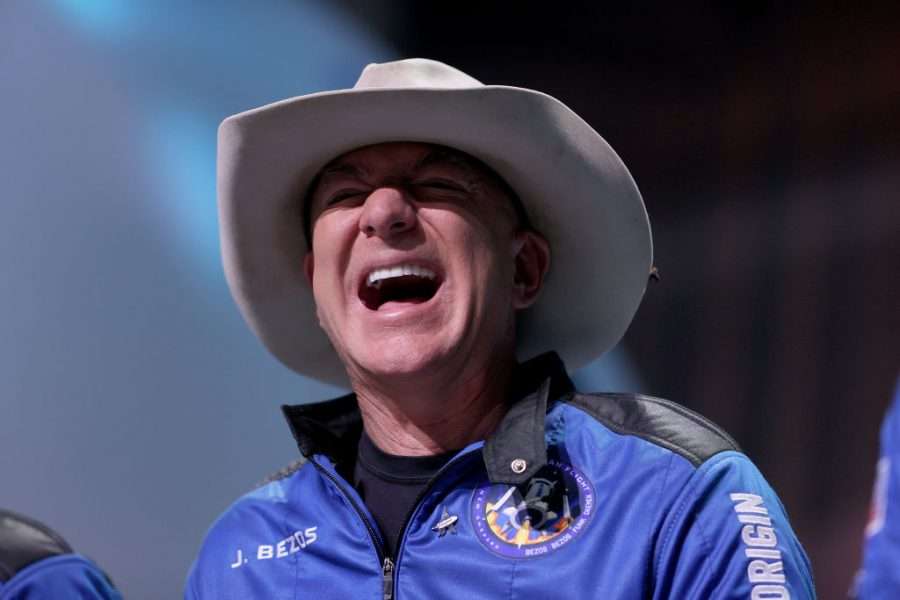 Jeff Bezos’ pledge to donate his vast fortune to charity is a reputation-laundering exercise – and a reminder that billionaires will never fix the problems that create them.

Jeff Bezos laughs as he speaks about his flight on Blue Origin’s New Shepard into space during a press conference on 20 July 2021 in Van Horn, Texas. (Joe Raedle / Getty Images)

In a surprising volte-face, the lizard-eating, union-busting, piss-prohibiting Amazon founder Jeff Bezos appeared in the news last week to let you know—despite all evidence to the contrary—he’s actually a pretty chill guy.

It took place on CNN, where Bezos anguished for eight straight minutes over the great difficulty of donating the ‘majority’ of his vast $119.5 billion fortune to charitable causes.

‘The hard part is figuring out how to do it in a levered way,’ Bezos complained. ‘You could do ineffective things… So you have to think about it carefully, and you have to have brilliant people on the team.’

Like most effective altruists, he began with the low-hanging fruit; donating $100 million to the obvious first port of call for any civic-minded billionaire—another billionaire. Dolly Parton, in this instance.

It’s certainly an attempt at reputation rehabilitation—pulled straight from Bill and Melinda Gates’ playbook—to patch up Bezos’ tarnished brand as the preferred liberal billionaire of the Obamanauts, circa 2008.

Years of tax avoidance, biometric surveillance, and ruthless worker exploitation have taken a toll. It’s hard to play the benefactor when your managerial negligence has allegedly caused the deaths of at least twelve people. But drastic times call for drastic measures.

Bezos’s ‘Road to Damascus’ moment may be tied crudely to profit; an attempt to draw attention from a New York Times report which claims Amazon is following the example set by Twitter’s Elon Musk by laying off up to 10,000 employees as soon as this week.

In the past year, rising inflation has changed public spending habits, leaving Amazon with its slowest growth rate in two decades. Reports of ‘trouble at mill’ will likely frighten investors and drive Amazon stock further into the doldrums.

But for the authors of a recently published review of scholarship surrounding elite giving, the accumulation of ‘soft power’ that comes with charitable donation may be as much of a motivator for Bezos as keeping the stock price buoyant.

In Elite Philanthropy in the United States and United Kingdom in the New Age of Inequalities, its authors argue:

‘Elite philanthropy is rarely a ‘pure gift’ motivated solely by altruism; rather, it represents a means of converting surplus funds into prized alternative forms of capital.

‘. . . Elites are drawn to philanthropy not simply as a means of virtuously ‘giving back’ to society, as is so often claimed, but also as an unimpeachable source of the complementary capitals needed to function effectively in the field of power.’

With his stock price hanging in the balance, Bezos may be hankering after his glory days, when he could buy two straight years of zero percent income tax, and an easy political ride, for the negligible cost of $100 million in donations to the Obama administration.

Crucially, the inaction and passive endorsement of the Obama administration allowed Amazon—in the words of labour reporter Alex Press — to ‘settle into the very marrow of the country… burrowing so deep that it cannot be removed.’

But liberal backing for the retail giant seems less certain today. In the US, more than 85 percent of Democratic voters are in favour of raising tax on corporations, while in the UK, despite years of government shilling for big multinationals, 52 percent of all voters feel the same.

Biden’s fiery support for the Staten Island Amazon Union earlier this year—however aesthetic—did reflect a noticeable shift in public opinion and a diminishment of the soft power that Bezos previously used to open doors, most notably to the White House.

In pledging to give away his wealth then, Bezos may have been channelling his historical forbear American industrialist Andrew Carnegie who observed that ‘the proper administration of wealth’ was required to create ‘ties of brotherhood’ between ‘the rich and poor.’

With a US administration at least more optically favourable to working people —and a public which increasingly disagrees that billionaires should even exist — Bezos may have hoped his latest announcement would be met with a flood of praise. What he got was a trickle.

CNN summed up the mood following the billionaire’s announcement in their interview with philanthropy researcher Benjamin Soskis, who said: ‘while we still don’t know a lot,’ Bezos has the ‘potential’ to have ‘a major impact on the world,’ before comparing the billionaire’s contribution unfavourably to his ex-wife Mackenzie Scott, whose philanthropy he described as ‘incredibly powerful’ and having ‘gained more acclaim than any major mega donor.’

While these comments fail to call out Bezos as the ur-example of a philanthropist seeking to address capitalist ills on capitalist terms, they do tell us something important: while unfavourable headlines may tarnish the brands of individual billionaires, public support for philanthropy remains high.

A recent study found 82 percent of the public think that philanthropists play an important role in society, while the same percentage disapprove of the tax breaks wealthy people receive to start foundations.

It’s great that there’s public recognition of charitable foundations’ role in sheltering the fortunes of the uber-rich—most are only required to spend five percent of their assets on furthering their charitable aims every year—but even when this money goes where it’s meant to, it does so free of democratic purview.

Without passing through what Jason Farbman calls the ‘formal mechanisms that put tax-based, public funding in the realm of democratic decision-making,’ billionaire philanthropy serves only to put greater control into the hands of capitalists—privatising the common good and increasing their already oversized influence over our lives.

After all, why should we allow Bezos to dole out, as benevolence, the $5.2 billion he has hoarded from the public coffers? That money already belongs to us.

It’s up to the Left to ensure arguments against the billionaire class amount to more than just condemnations of their ridiculous escapades and individual acts of cruelty.

But widespread public outcry over Bezos’s exploitation, Musk’s sabre-rattling, and Bill Gates’s pursuit of patent monopolies at the cost of human lives could help us cement a new public consensus: that the outsized role billionaires play in dictating the terms of fixing the inequalities they perpetuate is unjust, unfair, and undemocratic.

Let’s start by calling out the myth of the benevolent philanthropist: anyone who wrests funds from public services into the hands of billionaires is no more a friend to democracy than they are to the people they claim to want to help. If Bezos and his ilk are determined to play at altruism: let them put their wealth under democratic control, where it can finally do some good.