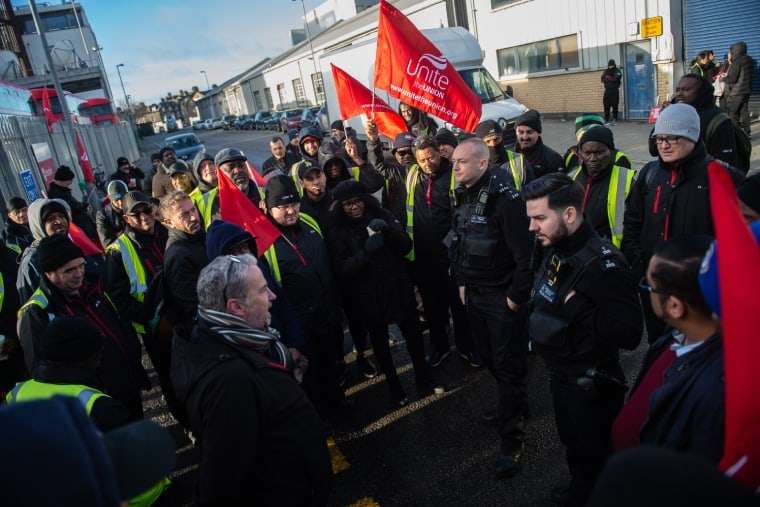 Over 950 bus drivers employed by Abellio in south and west London began 10 days of strikes on Tuesday in a dispute over pay.

Sarah, a Unite union rep at Walworth, said, “We’re on strike because we work for the lowest paid bus company in London. I earn £15.22 an hour. But if I worked over the road at GoAhead I’d earn £15.65.

“Our latest pay deal, after tax and national insurance, is actually a pay loss. We’re after £20 an hour. We had talks with management yesterday but they can’t seem to get the point of what we’re saying.”

Pickets were out in force on the first day of strikes, upbeat and confident, and got a constant stream of hoots in support from passing vehicles. At Walworth and Battersea garages, up to 80 Unite members joined each of the morning picket lines. At both garages police attempted to restrict the number of pickets—with little impact.

At Walworth, 30 pickets created a continuous US-style “walking line” to prevent scab agency workers taking out buses. One manager had told workers on the previous day that the strike wasn’t going ahead, but pickets reported that this had just galvanised more people to take part.

One bus striker said, “I’ve been a driver at this garage for 16 years. The job has gotten harder. We’re dealing with passengers who have mental health problems and things, and we get no support.”

Another striker said, “I’ve been here for 12 years and the job is very hard. On the buses you’re in a tiny corner by yourself. Anything can happen.”

“It’s my rest day today, but I always come on the picket line,” she added. “We’re part of a team.”

Trade unionists, socialists and campaigners should build solidarity for the bus strikers.