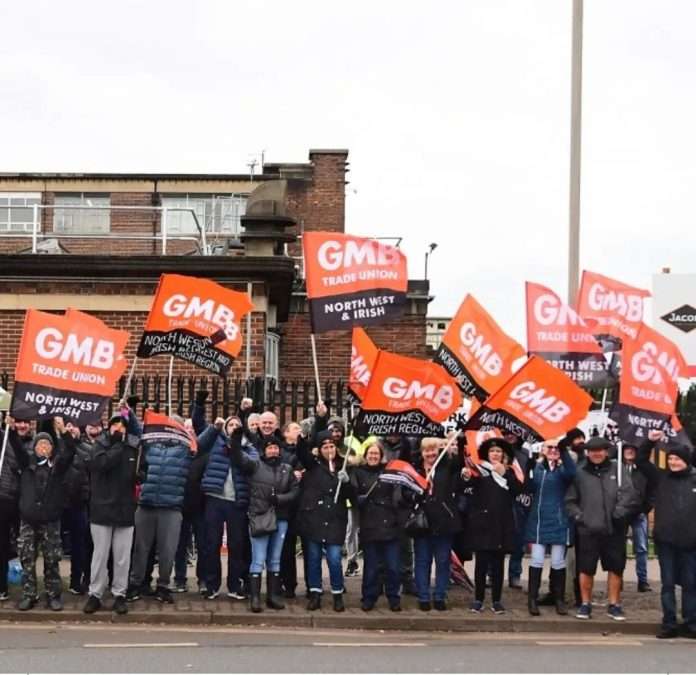 Bosses at the Jacob’s factory in Aintree, Liverpool tried to slap their employees with a pathetic 4% pay offer – so now, 750 workers have gone on indefinite strike to demand their worth.

More than 750 workers are currently out on strike over a proposed real-terms pay cut at the Aintree factory, which produces 4,000 tonnes of crackers a year. (Twitter / @84Gmb)

Founded as a small biscuit bakery in Ireland by a pair of brothers William and Robert in 1851, Jacob’s opened its first English factory in Liverpool’s Aintree in 1912. The year before, in Dublin, the trade union organiser Rosie Hackett had helped organise the withdrawal of women workers’ labour to support male colleagues at Jacob’s who were already on strike. Amid poor conditions and low wages, this strike proved crucial in the fight for change. Two weeks later, at the age of eighteen, Hackett would go on to establish the Irish Women Workers’ Union. It’s an inspiring story of industrial struggle, and that struggle continues today.

In 2021, you’d be hard-pressed to find a supermarket near you that doesn’t sell a Jacob’s product. The bulk of production remains at the factory in Aintree, which produces 4,000 tonnes of crackers every year. It’s also where more than 750 workers are currently out on strike action over a proposed real-terms pay cut. A permanent strike, they plan to stay out until the dispute is resolved—a reminder that the centuries-long fight to be treated with respect and dignity at work is far from over.

The dispute originated in September 2021, when management tried to force workers to do unpaid training, with the company claiming it was a contractual obligation with disciplinary consequences for those who failed to oblige. ‘They said if you don’t do it there will be consequences. Potentially the suspension of your job,’ says Tim Collins, a Jacob’s employee for nearly 17 years and GMB branch secretary.

This caused uproar amongst Jacob’s workers like Jane, who has worked there for the last six years. Like Tim, she notes a change in management in recent years which has made things worse for workers. ‘You used to be trained by somebody who knew what they were doing,’ she says. ‘But all of a sudden, it shifted, and anybody can train us. When you’re working with heavy machinery, you want to know that the person who’s training you is competent.’ It all comes down, she adds, to cutting costs.

But as the cost of living crisis continues to bite, poor pay has also been a cause for concern, and the GMB union have been in negotiations for a better offer. ‘The company were making ridiculous offers,’ explains Tim. ‘The final offer they made in June was 4.25%, and they made it conditional that training was going to be included in everyone’s contract.’

Training can take anywhere from a few weeks to six months, explains Tim—unpaid. Jane says: ‘Not everybody becomes a schoolteacher, because not everybody can teach. If you want the best, then let the best teach people, and if it costs you a little bit more, then that’s fine because it will benefit the company long-term. This is about people’s safety.’ She pauses, then adds: ‘I don’t want to put people at risk.’

Anne joined Jacob’s in 1986, and this isn’t the first strike she’s been on. This latest pay dispute, she explains, comes with context: five years ago, workers took a pay cut as the company told them they were trying to keep hold of jobs, and seeking to invest for the future. Overnight, she recalls, workers were made £4000 worse off—but these pay cuts weren’t made across the board, with senior management retaining their salaries and the promised investment never materialising.

Long-standing workers like Anne felt duped, and that anger still lingers today. ‘Some of these guys have been working here ever since they left school,’ she adds. ‘Forty-odd years of service to the company.’ These workers would work through Covid, too, trying to maintain a safe distance while separated only by thin plastic sheets.

‘The company have tried to be a bit clever,’ explains Tim. ‘The pay increase should have been in January this year. We started negotiations in October last year and the company just dragged it out. Inflation has skyrocketed since then.’

He goes on to say that the GMB has made numerous attempts to make counter proposals, to no avail. ‘We’ve looked at trying to do the deal a bit differently. A flat increase of £1750—that equated to 6.5% at the time. And the company quite literally laughed at us at the meeting.’ And while managers claims to be open to talks, Tim points out a statement in which the company said that if an agreement wasn’t reached by 14 November, then 2022 negotiations would stop, there would be no backpay and nobody would get a pay rise. It’s this ultimatum that’s led to the current all-out strike.

‘We were very clear we wouldn’t be forced to make half-hearted negotiation agreements that compromise our members’ welfare and financial circumstances,’ says Tim. Jane adds: ‘It’s not like we’ve asked them for a ridiculous amount—just a bit of dignity for a fair day’s work.’

And while management laughs, workers at Jacob’s are struggling to make ends meet. ‘I know of individuals using foodbanks,’ says Tim. ‘We’ve got one individual who walks for over an hour to get to work because he can’t afford public transport. He does a twelve-hour shift. Some days he turns up with no food. We allow him to dry his clothes in our union office and give him teabags and milk.’

Jane says she’s terrified to put her heating on, adding that she’s switched to pay-as-you-go because she can’t afford to pay the ‘ridiculous’ quarterly direct debits. And while everyone is feeling the pinch, those on the lowest grades are struggling the most. ‘Can you imagine what it’s like for a single mum working twelve-hour shifts and having to go to a foodbank because she can’t feed herself or her child?’ Jane asks. ‘Where’s the dignity in that?’

To add insult to injury, the company has its own app where management tells workers how to reduce their costs. ‘There was one post the other day where they told us how much things had gone up by, like milk: 40%, butter: 29%,’ says Jane. ‘So they’re telling us how much prices are going up by but then telling us we’re being unreasonable for demanding more than 4%.’

Others have struggled to pay their rent, with the GMB having to direct members to a local community centre and to the local MP Dan Carden for financial support and debt advice. Jacob’s also have a salary finance scheme running at the minute: at the back end of last year, the company was reportedly broadcasting how easy it was to get a loan, with workers taking out tens of thousands of pounds. ‘Many are worried that they might be blacklisted because they can’t afford to pay back the loans, given rising inflation,’ says Tim. ‘That’s the dire straits we’re in.’

Despite that hardship, without the company returning to negotiating table, union members have said they will continue with the strike. The company, meanwhile, seems determined to undermine the industrial action—both by temporarily shifting production to Portugal, and, according to Tim, by encouraging workers to cross the picket line in exchange for enhanced pay. ‘They were calling vulnerable members at home too,’ he adds. ‘They’ve picked people off because of their mental health or financial circumstances.’

Nonetheless, Tim says morale on the picket line has been the best it’s been in a very long time. ‘As the weeks go on, the camaraderie builds. The energy—you couldn’t pay for it.’ He’s under no illusion that it’s an uphill battle for the workers, but he knows it’s one worth fighting—for his colleagues, and for the future of the factory.

The workers remain resolute, gathered outside the gates of the Aintree factory every day, with locals honking in support from passing vehicles. ‘We’ve created a culture on the picket line where if you’re unwell we’ll look after you. If you’re struggling come to us in confidence and we’ll and provide some additional support,’ says Tim. ‘Some people on the picket line have said we lost our connection as workforce. We’ve found it again because we don’t feel threatened anymore.’

Anne, too, speaks of an ‘unbelievable’ level of support from members of the public. ‘The people of Liverpool come together when needed. From the lorries and bus drivers going past to the locals bringing us food and wood for the fire, the support has been incredible. You could cry.’

Buoyed by other recent industrial victories in the North West, Jane is clear she and her colleagues won’t be settling for crumbs anytime soon. ‘They’ll do whatever they can to break us, but we’re standing strong. The company might not support us, but we are supporting each other. That’s how we’ll win.’