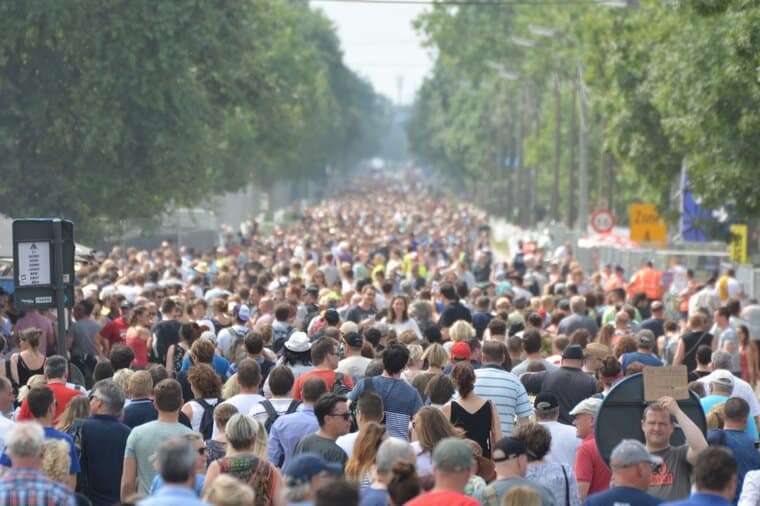 The population of the planet has hit eight billion

The announcement this month by the United Nations that the global population has reached eight billion comes in the context of environmental threats facing humanity. Existential threats related to environmental collapse, species extinction, global pandemics, and the ever-unfolding catastrophe that is climate change means that people will seek explanations for the environmental crisis.

Some in the climate movement see population growth as at least part of the problem. The idea has its roots in the writings of Reverend Thomas Malthus over 200 years ago. He maintained that population growth outstrips the resources to support it. But such arguments are easily refuted as the human population has been growing for at least the past 20,000 years and continues to grow to this day.

The ability of humans to shape the environment around them through the application of technology means they are not constrained like other animals. The idea that the world is overpopulated does not make sense in other ways. It assumes there is some ideal population for the planet as if humans were like rabbits living on an island. But human society is much more complex than that.

Humans can live in a vast range of habitats from giant mega urban areas such as Tokyo and Mexico City to isolated stations in the Antarctic, under the ocean in submarines, or even in space. Focusing on population takes us away from discussing the real cause of the environmental crisis we are facing today. That is the endless drive by capitalism to exploit and waste the resources of the planet in order to accumulate profit.

Karl Marx and Fred Engels were right to condemn Malthus’ thesis as “a monstrous libel against humanity”. The real culprits are not poor people having children in the Global South but the 100 corporations responsible for 70 percent of global carbon emissions. Capitalism is killing the planet, not people.

Is it deal or no deal in Wigan?

Wigan council for several years now has been transferring its services to charities. First the libraries and youth clubs were given over to charities that employed people on very low wages and employed volunteers with no pay. Then adult care services were moved under an “innovative” scheme known as The Deal. It promised community partnership but again was about breaking down the provision of services through a normal staffing model. Instead it relied on people “doing it for themselves”.

Each of the charities that are involved must submit regular bids for funding from the council and when they do it often involves accepting cuts. There are accusations that services for people with learning difficulties and those with mental distress or drug problems are being run by people with inadequate training. Often, if there is training, it is done by volunteers with little experience. I believe health and safety reports have been written without a proper site visit.

Local MP and shadow local government secretary Lisa Nandy has told the Labour Party that all councils should follow Wigan’s Deal and “decentralise”. Nandy was one of the people who attempted to undermine Jeremy Corbyn when he was Labour leader. She is now pushing a method that erodes public services and weakens workers.

University staff are working on average 51.3 hours a week under casual contracts with reduced pensions due to cuts. This is not a sustainable working environment and is incompatible with staff being able to create an appropriate learning environment. Students and workers need to unite.

We students are on a journey to become workers, many of us are already part of the workforce due to the financial pressures of university and the cost of living crisis. We must help pave the way to better working conditions for now and in the future. Students joining the fight in this class war will help amplify the working class’s voice.

Staff’s teaching conditions are our learning conditions. Though the cuts are not affecting our bank accounts, they will affect our education. We should join picket lines to build even more pressure.

Low Traffic ­Neighbourhoods (LTNs) are a lazy “solution” that diverts traffic to main roads, ramping up pollution for the poorer communities who live close to them. I’ve also noticed they tend to be put up on wealthier streets.

We should instead demand more cycle routes, free public transport and employers incentivised to employ people who live closer to the workplace. Another idea would simply be to ban cars in London with exceptions for disabled people. Better yet, a socialist economy which actually plans for workers’ travel in an environmentally safe way.

I think we should want and support LTNs. But they do need to be brought in with provisions in mind such as upscaling public transport. One built in a more middle class ward in Birmingham was done, I’m guessing, because the council thought the people were more “enlightened”.

Certainly, some of the climate protests originated from here. But it has proved quite divisive especially as local buses are getting worse. There are other things that could help like offering people to swap to jobs closer to home.

Joining up strikes to win

It is absolutely essential that the various unions should focus on striking on the same dates. Prolonged or regular days of action would send a clear message of working class unity to the Tory government that greedy corporations are no longer acceptable under any circumstances.

Tactics need developing, and quickly to achieve results. Right now the government is counting on that lack of unity to continue their ways.

How can the Tories demonise Albanians and deny a genuine need of sanctuary for people fleeing war? These brave and badly let down people should be welcomed and working class people shouldn’t fall for the Tories’ hateful lies.

We must support each other and promote peace, compassion and global non-violence to stop corrupt and hate filled lies that let vulnerable people and populations down so badly. That’s my message for the government.