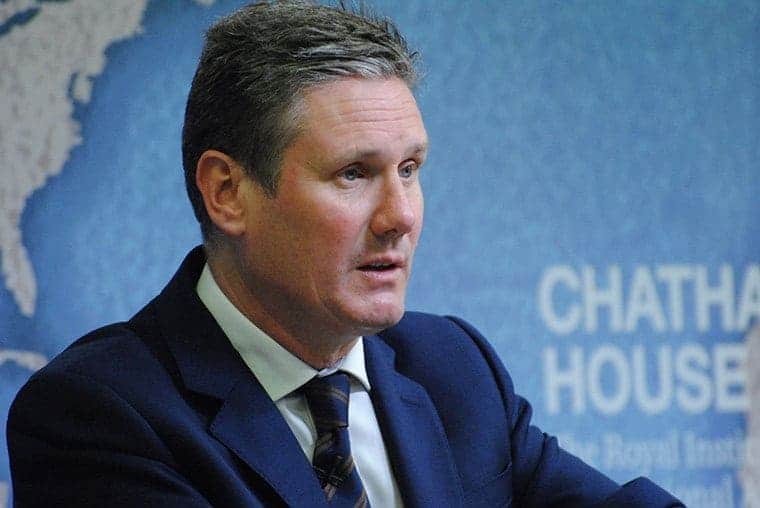 Keir Starmer never backed the pay fight—and now he wants to wreck it with migrant bashing. In a speech on Tuesday, the Labour Party leader told bosses that he was both “ready for partnership” with them and that he—essentially—wants them to cut migrants’ jobs.

This, he said, was the Labour Party’s solution to low pay for workers. Starmer said Labour and bosses’ “common goal” should be to “help the British economy off its migrant dependency.” “The days when low pay and cheap labour are part of the British way on growth must end,” Starmer said.

The speech was so right wing that Tory newspaper the Telegraph wrote on Tuesday that its message “echoes that adopted by successive Tory prime ministers, including Boris Johnson and now Rishi Sunak.” Those Tory prime ministers all thought that by bearing down on migrants they could pretend to be on the side of workers.

At the same time, they would shift attention away from the real cause of low pay.  That’s the years of austerity and real-terms wage cuts bosses have stuck to since the financial crisis over a decade ago. Keir Starmer thinks that by copying them he can win support for Labour in the so-called “Red Wall”.

This is the areas of the north and midlands of England where, politicians and pundits imagine, working class people are defined by hostility to immigration. There’s no evidence that this is true of working class people anywhere.  But for Starmer, appealing to the most reactionary elements of society is better than the alternative—backing strikes and a fightback. It’s telling that Starmer made his speech at the conference of the Confederation of British Industry, where all the biggest bosses gather.

They’re the very people hoarding the cash to make sure no one gets a pay rise now. And they’re the same people Starmer has spent his entire time as Labour leader trying to win over.

In the same speech, Starmer promised a “new partnership” with business, “different than anything that has gone before”. “This is a different Labour Party and there’s no going back,” he told them.” He added that Labour is “Not just a pro-business party but a party that is proud of being pro-business.”

So Starmer didn’t demand bosses pay a £15 minimum wage. With inflation now at 14.2 percent, even that is inadequate. But it’s too much for Starmer. He didn’t mention the strikes either—and that sent a message too. Starmer was talking of “partnership” with bosses in a week that a quarter of a million people confronted theirs with walkouts.

The bosses at the CBI could be reassured that, rather than siding with the strikes, Starmer would prefer to turn on migrant labour instead. Anti-migrant scapegoating doesn’t just turn attention away from the pay strikes—it can divide and weaken them. Study after study has shown that migrant labour has little to no impact on wages. But migrant workers have often been at the forefront of strikes to win more.

Today’s pay strikes depend on all workers being able to stand solidly together. That unity and solidarity breaks down if the politics that Starmer is now pushing takes hold.

Worse, the forces that actually benefit from that division get stronger. It can boost the Tories, who love nothing more than to bash migrants rather than bosses—and worse. When Labour prime minister Gordon Brown took up the slogan “British jobs for British workers,” the Nazi party the BNP celebrated that he’d brought their message into the mainstream.

It underlines the need both for the present strikes to escalate—and to take on politics.  Activists and strikers should take an anti-racist argument to every strike and picket line this week, and make sure the unity of the picket line beats the division pushed by politicians.