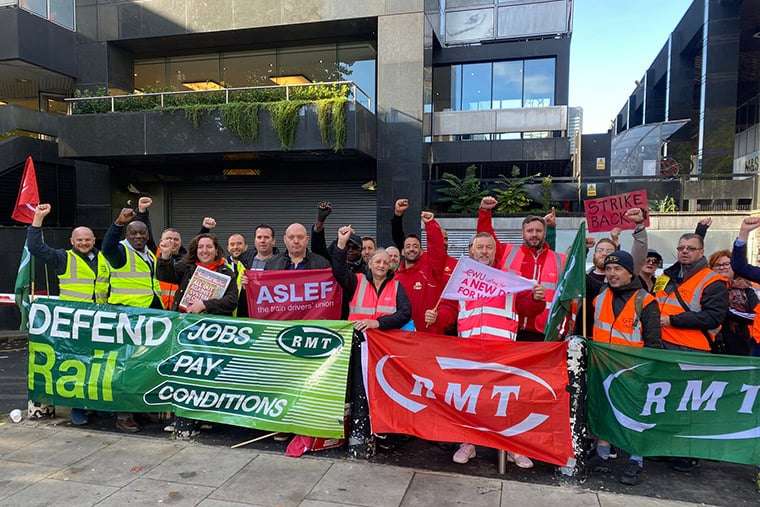 Rail and mail workers from united at Euston station in London during a united strike by RMT, Aslef and CWU union members

Around 40,000 rail workers are set for four 48-hour strikes in December and January. It comes after both Network Rail and the train operating company bosses refused to even make an offer on pay, jobs and working conditions.

RMT union leaders on Tuesday announced strikes at Network Rail and 14 train operating companies. Workers are set to begin two-day walkouts on 13 and 16 December and 3 and 6 January.

The media and the Tories will howl that workers are ruining people’s Christmas holidays. But it is the pay-cutting, conditions-smashing companies that are to blame. Boosted by the government, they insist on real terms pay cuts and huge job losses.

Earlier this month, the RMT mistakenly called off strikes to encourage negotiations. The bosses just used these to string the unions along.

The RMT said the train operating companies had “without any credible explanation refused to make their promised written proposals”. And Network Rail had “also refused to make any proposals promised at the conclusion of intensive talks last week”.

The lesson is clear—only escalated action has a chance of winning. And RMT members have shown that they are ready for further resistance.

Across both Network Rail and 14 train operating companies last week, the average vote for more action was 92 percent on a turnout of 70 percent. The votes smashed the restrictions of the anti-union laws.

Network Rail worker Dan told Socialist Worker, “It’s a great result. Everyone I know wants a lot more strikes to be called. That was the downside to the last six months—not enough was done. We need to get it done as soon as possible, and that will take an all-out strike.

“Yes, it’s difficult for low-waged staff, but an on and off, stop-and-start strike isn’t serious enough.” He added that “coordination between all unions” was key to winning.

Almost 10,000 members of the Aslef train drivers’ union were set to strike this Saturday at 12 train companies.

So far at these companies there have been strikes only on 30 July, 3 August, 1 October, and 5 October. Such sporadic action, mostly separate from the RMT, is not enough.

The new rail strikes are welcome and give other unions, including the RCN nurses’ union and the PCS civil service workers’ union, a renewed opportunity to strike alongside others.

Unfortunately, the new rail strike dates do not coincide with the Royal Mail walkouts announced last week. As the bosses and Tories dig in against workers’ resistance, escalating and spreading the strikes is urgent.