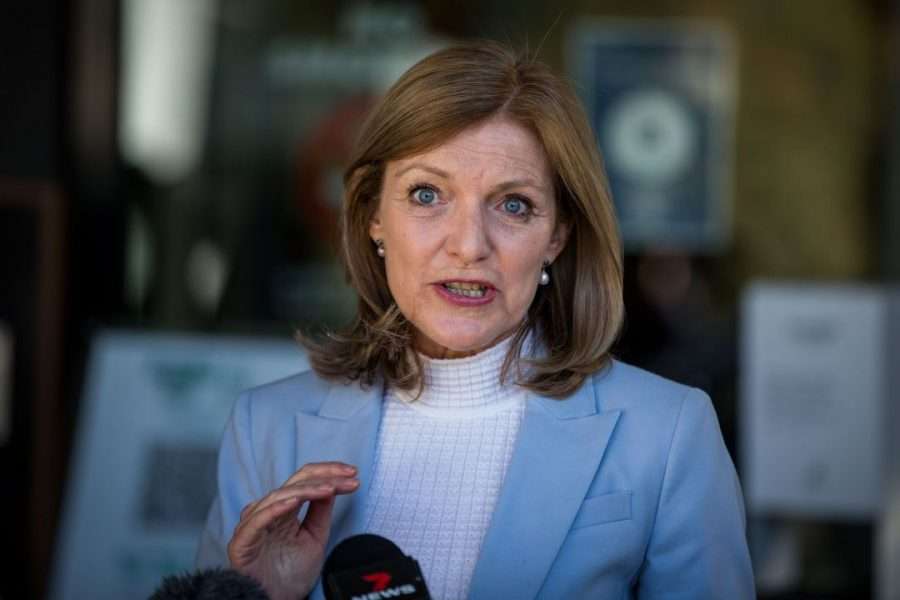 Fiona Patten of the Reason Party speaks to the media outside the Victorian Parliament on October 26, 2021, in Melbourne, Australia. (Darrian Traynor / Getty Images)

In the lead-up to Victoria’s November 26 state election, at least one genuine controversy has punctuated a campaign period marked by a lack of meaningful contestation between the major parties.

At the heart of the controversy is Fiona Patten, leader of the (small-l) liberal Reason Party and one of five upper-house MPs representing Melbourne’s Northern Metropolitan Region. As the media would have it, Patten stands nobly above the backroom wheeling and dealing endemic to elections for the state’s legislative council. Indeed, she has previously denounced these maneuvers as “a corruption of the political process,” claiming that right-wing microparties have gained an unfair advantage over Reason, thanks to shadowy alliances.

Patten’s narrative is self-serving and cynical. As recent revelations have demonstrated, Patten is a leading beneficiary of exactly the same kind of corruption she has denounced other parties for engaging in.

Reason and the Angry Victorians

Patten claims that the far right is the main threat to her parliamentary seat. Despite this, her party has entered into a secret deal with the far-right Angry Victorians Party (AV).

According to the deal between Reason and AV, Patten will receive AV preferences in Melbourne’s Northern Metropolitan Region. In return, both the Reason Party and the Patten-associated Legalise Cannabis (LC) party have directed their preferences to AV above the Greens in one of Victoria’s eight upper-house electorates. In another, they have agreed to direct votes to AV above both Labor and the Greens.

As a consequence of these deals, many votes for Reason and LC — cast by people who largely see themselves as progressive — will end up with the far right. Patten has told her supporters again and again that a vote for Reason is essential to stopping conservative gaining a bigger foothold in the Victorian Parliament. Despite this, the reality is that Reason and LC votes may help elect hard-right politicians.

By the same token, far-right votes cast in the Northern Metropolitan Region may end up ensuring Patten’s reelection, despite the fact that she’s been one of Andrews’s most reliable parliamentary allies.

Although the media has remained almost entirely silent about it, Patten’s political career is built on deals like this. She came to prominence as leader of the Sex Party, formed in 2009 with the backing of the Eros Association, a lobby group, then led by Patten, representing sex industry bosses.

In line with the interests of brothel and strip club owners, the Sex Party pitched itself as an anti-religious, libertarian party. It attracted modest support, receiving just over 2 percent of the Senate vote in the  2010 federal election. In the Victorian state election the same year, the Sex Party received 1.9 percent of the statewide upper-house vote. In 2012, Patten ran for the lower-house seat of Melbourne, winning 6.56 percent of the vote. Her big break came in 2014, however, when she won a seat in the state’s upper house Northern Metropolitan Region with a primary vote of just 2.87 percent.

In 2018, the Sex Party renamed itself Reason in an attempt to broaden their vote. Rebranded, Patten won reelection with a slightly increased vote of 3.3 percent, coming in just behind the then-recently formed Victorian Socialists, who scored over 4 percent.

To understand these results, it’s necessary to understand Victoria’s idiosyncratic voting system. Each upper-house region elects five spots at once, and as a result, candidates must win a quota of 16.7 percent of the vote. Major parties like Labor and the Liberals have no trouble winning one or two seats on the strength of their primary vote. Minor parties, however, rely on preferential votes cast first for other parties to get them over the line.

To win on such a small percentage of the vote, Patten also paid for the services of Glen Druery — the “preference whisperer” — who has made a career out of brokering disreputable preference deals.

For years, Druery flew under the radar. Just a few days ago, however, Melbourne’s most widely read newspaper, the Rupert Murdoch–owned Herald Sun, ran a front-page headline reading “Election Scam.” The story exposed Druery after he had been secretly filmed by members of Angry Victorians during a meeting with their party.

In the video, Druery brags about controlling who will win seats in the Victorian upper house. After listing a small number of parties that refused to pay for his services, he brags, “the rest I control. Everybody . . . I’ve got more balls in the air than a vasectomy doctor.” In the meeting, he promises AV that for $55,000 he can deliver them a parliamentary seat.

Although you’d think this would be illegal, it’s not. Druery’s service is essentially that of a broker. He knits the small parties who pay him into a bloc that shares preferences in order to distribute seats among them in accordance with a prearranged plan.

What makes agreements like this possible is Victoria’s Group Voting Ticket (GVT) model, which lays out voting rules for Legislative Council elections. Introduced by Labor in 2006, the GVT model allows parties to distribute voters’ preferences on their behalf.

In practice, this means that voters can choose not to list their voting preferences. Instead, if they only vote “one” for the party of their choice, the party itself gains the right to determine their preferences. Understandably, given the intimidating size of the upper-house ballot, the vast majority of voters choose to vote in this way. This contrasts with elections for the federal Senate, which ditched the GVT model in 2016 in favor of an “optional preferential system” that requires voters to nominate their own preferences, from one to five.

In fairness, if Druery organized voting blocs consisting of parties with broadly aligned values, these deals would be reasonably democratic. Unfortunately, and unsurprisingly, very few parties are prepared to pass up an easy votes by acting in such a principled, democratic way.

Patten’s career is a textbook study in why the GVT system and Druery’s deals are dangerously undemocratic.

In 2014, thanks to Druery, she made the leap into Parliament with only 2.87 percent of the vote. In that case, Druery only charged $20,000 for his services. The bloc he stitched together — which delivered to Patten the fifth spot in the Northern Metropolitan Region — was far from politically aligned. It included, among others, the conservative Shooters, Fishers and Farmers Party. As a quid pro quo, votes cast for Patten helped secure two parliamentary seats for the Shooters on only 1.65 percent of the vote statewide.

Patten and Druery then had a falling out, and she chose not to engage his services in 2018. However, her subsequent strategy replicated his. Instead of joining the “Druery bloc,” Patten put together her own preference-trading alliance. Again, this included parties and candidates on completely opposed sides of politics. Again, the strategy was a success, helping Patten to eke out a narrow victory thanks to votes from the Liberal Democrats, a right-wing libertarian party. In return, votes cast for Reason helped the Liberal Democrats win a seat in the Northern Victoria Region on a primary vote of just 3.8 percent.

As this year’s state election approaches, Patten has presented herself in the media as a crusader against Druery-style “preference whispering.” Yet even her voting record in Parliament indicates otherwise. In 2021, Victorian Greens leader Samantha Ratnam moved in Parliament to ditch the GVT model in time for this year’s election. At the time, Patten described it as a “stunt” and joined all the other minor party MPs in opposing it.

This election, Patten is hoping the same tactics will again deliver her a seat. The price, however, is that progressives who vote for Reason may find their votes help elect far-right candidates from the Angry Victorians.