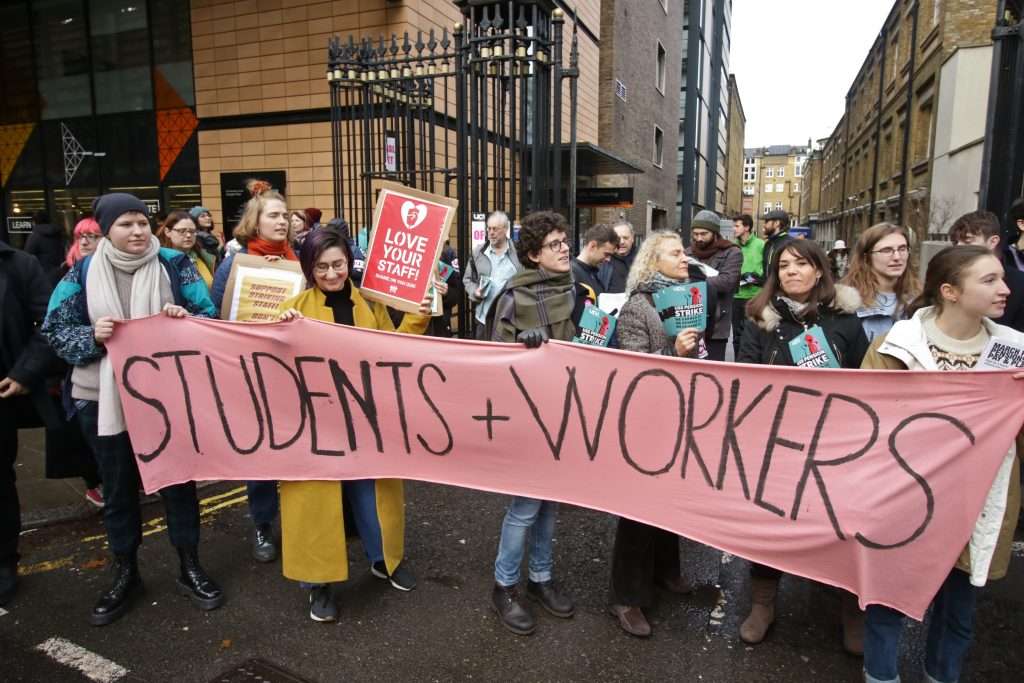 UCU workers are escalating industrial action in their disputes over pensions, pay, casualisation, inequality and workloads. UCU striker and rs21 member Jaswinder Blackwell-Pal explains why this is a vital move, and how students can show solidarity.

The higher education sector is preparing to see it biggest ever strike action, as over 70,000 workers at 150 institutions nationwide prepare for another round of action this week and next. Academic, administrative and support staff will strike on the 24th, 25th and 30th November in an intensification of long running disputes around pensions, pay and working conditions in universities.

Members of the UCU union smashed the Tory anti-union laws earlier this autumn, delivering an over 80% yes vote for industrial action on a turnout of over 60% – an incredible victory at a time when the government are looking to further clamp down on workers’ abilities to organise and participate in strike action. The recent ballot also marks a serious escalation in university staffs battle: alongside these three days of strike action, workers will participate in ongoing action short of a strike (ASOS) from the 23rd November, a marking boycott from the new year, and escalating strike action from February.

Not only is the course of action ramping up, these strikes will also be far bigger than the previous rounds. While strikes on the same set of issues have occurred repeatedly over the past four years, this is the first time the union has run an aggregated ballot. The difference between an aggregated and disaggregated ballot is key to the size and strength of this round of action.

On a disaggregated ballot, there are separate votes for members at each individual institution, and only universities that pass the ballot can go on strike. Previously, this has left many universities out of the action who narrowly missed the strict and repressive threshold for action, and limited how many members could participate in the strikes.

With an aggregated ballot, all UCU HE members nationally are balloted at once, and the union needs to achieve a 50% or higher turn out across the whole membership for any result to be valid. Aggregated ballots are a risky strategy: stronger branches need to secure an even higher percentage of votes to make up for less organised branches who are unlikely to meet the threshold.

But the strength of organising efforts has massively paid off: a 60% result is a complete defiance of the trade union laws and means that the amount of universities participating in this round of action has jumped massively, from 68 universities in the last wave of strikes, to 150 this month. This gives the union far more leverage and potentially brings many more universities and vice chancellors to the negotiating table, as their institutions and campuses are now also effected.

The strike is centred around two disputes, the first on changes to the USS pensions plan which will see many staff lose between 30-40% of their pensions. The valuation on which the pension cuts are based was done in March 2020, a time of crashing markets amidst the global pandemic. The bosses of the pension scheme used this to ram through cuts which will decimate the pensions of university workers – and the union is demanding these be revoked, with benefits restored.

The other dispute is the ‘four fights’, which combines pay, casualisation, inequality and workloads. The union is demanding a 12% pay rise in line with inflation and real terms wage cuts that have plagued the sector for years. This puts the UCU strikes in line with other strikes taking place over pay this autumn, as workers across sectors fight back against a revamped austerity program which shifts the burden of the cost of living crisis onto them, instead of the rich.

Four fights is also a particularly important battle because casualisation is a serious and ongoing problem in the sector. Tens of thousands of people are employed in academia on casualised contracts, often zero hours, with incredibly low pay and few employment rights. The marketisation of higher education, and universities’ desperate attempts to cut staffing costs while chasing student recruitment, means that many institutions are now reliant on a model which exploits those on the lowest rung of the academic ladder, leaving no room for career progression and creating huge divisions in the workforce which are damaging to both staff and the education offered to students.

This is a crucial moment for the disputes. A breakthrough, particularly on pensions, is entirely feasible in the near future. The threat of widespread university shutdowns continuing into 2023, and a dreaded marking boycott, will force university managers who have previously attempted to sit out the strikes, to start coming up with responses.

Management are clearly terrified at this round of action. Threats of punitive and 100% pay deductions for ASOS (action short of a strike) are already being threatened at several universities. But this is shaky ground for management, as shown at Queen Mary in London. A local dispute there over deductions turned into a marking boycott throughout the summer, which resulted in concessions (however limited) from management, and a complete breakdown of trust between staff and the college leadership. At a time when ‘goodwill’ is already so deeply damaged in the sector, and when the cost of living crisis makes it morally reprehensible to dock staff 100% of their wages, this combative approach runs the risk of further mobilising UCU members.

For students these strikes are yet another in a wave of action which has affected the sector for years now. But these strikes are absolutely essential to pushing back against the worsening working conditions across HE which jeopardize and damage their education. Students have long been positioned as consumers in a marketized higher education system, and should absolutely use this position as leverage to put pressure on management to settle the disputes and concede the UCU’s demands. They can do this through organising fee strikes, writing to management, amplifying their voice in a way that pushes pressure upwards, rather than towards the academic and administrative staff fighting for their jobs and conditions. Students can and should also visit picket lines which will make the pickets larger and more lively than before, and join teach outs where they can. Picket lines, as ever, serve as excellent educational opportunities to talk and think through what another university might look like. For others wishing to support the strike, donations to local hardship funds are much needed, as financial support will be necessary once the strikes continue in the new year.

Click here for rs21 guides and information on strike strategy and how you can support strikes.