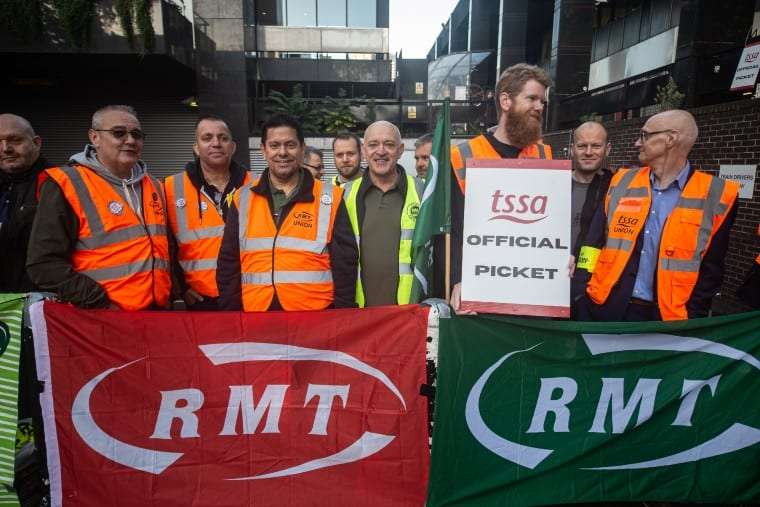 Socialist Worker can exclusively reveal the deal that the Tory government is refusing to allow the rail unions and the train companies to discuss. We also know why it has been held up.

The manoeuvres confirm the RMT union’s belief that “it is clear that the government is directly interfering with our attempts to reach a settlement”. But the details we have also show that the offer available is rubbish and would represent a massive defeat for workers.

The government has set up a Rail Workforce Transformation Team in the Department for Transport (DfT) of around 90 civil servants. A person familiar with high-level discussion in this section has spoken to Socialist Worker.

“Our job is to make cost-savings, reduce the outgoings and to ease the process of resuscitating the companies after the pandemic,” they said. “The hope is that by implementing the new ways of working that the DfT could make savings of £1.85 billion or more in subsidies to the private companies.”

These cuts are central to the rail strikes. As has been widely publicised, the “reforms” demanded by the train operating companies (Tocs) mean compulsory weekend working, almost total removal of the guards’ role, mass ticket office closures and more.

The Tories, Network Rail and the Tocs have a deal linked to these changes to put to the RMT, and the RMT knows it. It would be a pay offer of 4 percent this year, then 4 percent next year and a further £500—but only if the union leaders agree to and police the cuts.

It’s an appalling offer, far below the rate of inflation and with murderous attacks on jobs and conditions. It ought to be rejected by union leaders without any wider consultation if it does openly appear.

However, says our source, the Treasury will not allow the offer to be made unless they know in advance that the RMT will agree to the cuts. And the Tories have also been made uneasy by a slightly better offer put forward in Scotland.

This is a different—but still wholly inadequate offer—that ScotRail workers are now voting on, with the ballot closing this week. They ought to reject it. It involves a 5 percent one-year deal, plus £750 for accepting new technology and cuts. But the strings attached are in no way as far-reaching as the Tories want to see rammed through at Network Rail and the Tocs. So the RMT might go for it.

“Apparently some ministers see the ScotRail deal as too close to a win for the unions,” says our source. “They think that if RMT leader Mick Lynch achieved it UK-wide he would say he had won, and the other unions would agree with him. They would then use it to encourage other strikes. The ministerial team is angry at the ScotRail proposals because the logic is to offer the same across Britain.”

One RMT member told Socialist Worker, “It’s interesting to see the government is up to its neck in the companies’ tactics, even though they claim they’re not. But what I take away is that nothing on the table is remotely close to what we have been fighting for.”

It was announced on Wednesday that RMT members at Transport for Wales have accepted a pay offer of just 4.5 percent, increasing to 6.6 percent with “productivity elements”. This is a bad sign. This sort of deal must not be rolled out more widely.

Lynch is due to meet transport secretary Mark Harper this week. Rail workers are set to stage a series of 48-hour strikes in December and January. Over 40,000 RMT union members in Network Rail and 14 Tocs plan action on 13, 14, 16 and 17 December and on 3, 4, 6 and 7 January. A ban on overtime will also be in force from 18 December through to 2 January.

The Tories’ role means that only causing a deep political and industry crisis can see rail workers win. And that means further escalation.