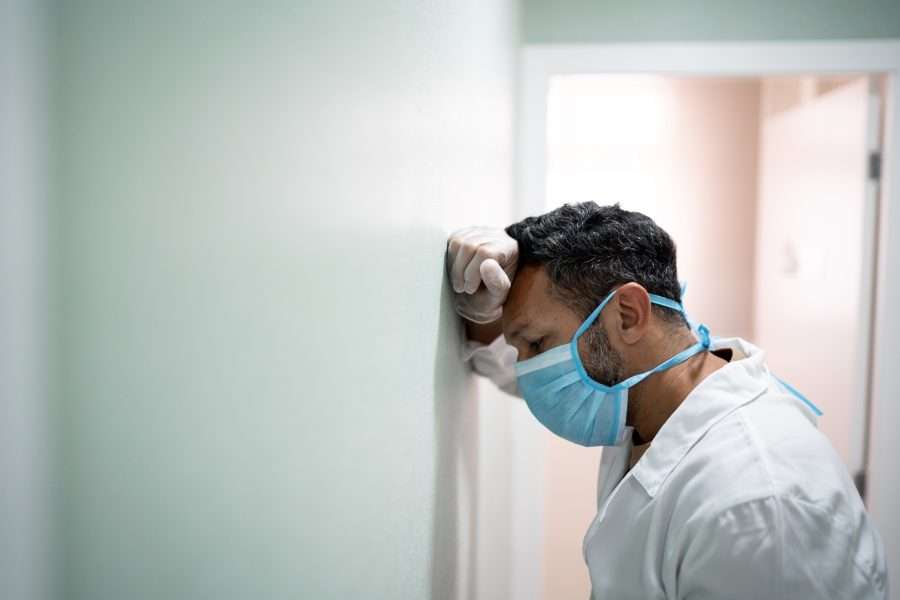 Reports of discussions about a two-tier NHS in Scotland only make explicit what’s been clear for a long time: that across the UK, our public health service is being stripped away – and we need to fight to restore it everywhere.

The drive to promote the private sector during Covid exposed a government comfortable with the incompetence and fraud that takes place when the ‘free market’ is set free to monetise health. (Getty Images)

For many years, those who raise the alarm about the future of the NHS have been ridiculed by Conservative politicians seeking to deny their direction of travel and minimise the dangers. So too by many right-of-centre journalists, media commentators, and shock jocks. But the news this week from Scotland should give cause for concern. Back in September, NHS Scotland leaders reportedly discussed options with their CEO regarding charging wealthier individuals and other previously off-the-table options, like cutting access to some treatments and free prescriptions, and taking on the higher risks of discharging patients without safe community care in place.

Nicola Sturgeon stamped on this report quickly, deeming it politically unacceptable and a danger to the SNP. But seeing these thoughts in the leaked minutes of that meeting is a stark reminder of what is being discussed daily now in England, where the founding principles of the NHS are under heavy attack.

Well-known journalists and media commentators, including in the BBC health correspondent’s ‘Analysis’ piece on the news from Scotland, openly echo the call that the NHS is unaffordable. They list the symptoms of the NHS in distress without ever questioning the cause. But to understand what’s happening, they must start asking the questions that should be at the heart of their professional curiosity: Why is the NHS in crisis? What is the truth behind the repeated assertion that the NHS is receiving record funding? Why can’t we afford the NHS?

Scotland and the devolved governments are dependent on the UK government’s decisions on health funding. They get their funding allocation from the Treasury as a proportion derived from the Barnett Formula. That means NHS and social care austerity—both the original and the current reboot—damage all the devolved nations’ health and social care services.

Health underfunding in Scotland has therefore led them to think the unthinkable: that Scottish hospitals might take higher risks by sending patients home more quickly, that funding of some new drugs be paused, prescription charges be introduced, and even the prospect a two-tier health service raised. These measures would end the principles of universal and comprehensive care provided by public services, publicly funded and free at the point of need—the direction of travel this UK government has been driving towards. (Of course, the principle of universal healthcare ended several years ago for at least one million undocumented people in this country, including 200,000 children, for whom free healthcare is viciously limited and for whom maternity and other hospital care is charged.)

Embedded in the 2022 Health and Care Act is a legislative change that brings these threats close to reality in England. ‘Discharge to assess’ allows discharge of patients before all their care needs have been assessed. In this second age of austerity, the likelihood of prompt community-based assessment and delivery of safe care is remote. The notorious risk inequality embedded in the postcode lottery of care went up a few notches when the 42 separate integrated care systems in England were legally mandated to make decisions necessary to balance the books. The route to strict financial balance is reinforced by the potential to make local decisions to end to national terms and conditions for NHS staff, added to which the Secretary of State can now unilaterally amend clinical professional regulation and impose local reconfiguration decisions.

The NHS Scotland meeting described a ‘billion-pound hole’ in the budget that meant it was ‘not possible to continue to run the range of programmes’ the NHS currently offers and still respect the duty to patient safety and of ‘doing no harm’. Scotland fears that ‘unscheduled care is going to fall over in the near term before planned care falls over’. The minutes record concerns that ‘previously not viable options are now possibilities’, that ‘fundamental reform’ of the primary care model—a keystone of the NHS model—‘must be on the table’, and that the NHS model ‘no longer works today’.

In England, the government has created something close to a 30-billion-pound-hole and has used this to escalate the ideological push to replace public services with the private sector. We have had a series of health secretaries—Lansley, Hunt, Hancock, Barclay, Coffey, and Barclay (so bad they named him twice)—with links to the ideology and funding of the band of Tufton St neoliberal organisations. After 12 years, the private sector is more firmly embedded in the body of the NHS, a dangerous parasite feeding off its underfunding. The parasite is not only has an unhealthy bite of clinical services, but is also sucking up pathology, imaging, hospital pharmacies, patient referral systems, IT systems, and data management. The drive to promote the private sector during Covid exposed a government comfortable with the incompetence and fraud that takes place when the ‘free market’ is set free to monetise health.

Whether commenting on the crisis in Scotland’s NHS or on the disastrous state of primary, community, hospital, mental health, and ambulance care in England, it is lazy and deeply lacking for commentators to trot out the zombie questions of the Institute of Economic Affairs and their related ideologues. Stop repeating the myths: that the NHS is a bottomless pit, that we cannot afford the NHS, that social insurance models are more efficient, that charges would stop people abusing the NHS, that rationing is needed, that GPs are lazy.

The real questions to be asked are these: Why has this government failed to provide any NHS workforce plan for over 12 years? Why did they cut 4,000 nurse training places in 2010 and suspend medical school expansion? Why did they end the NHS student bursary in 2017? Why did they deliberately underfund and understaff the NHS to the point where there are 132,000 vacancies and £11 billion is wasted in a year spent on private agencies providing staff to fill gaps in rotas created by their negligence? Why did the government privatise the supply lines for procurement of PPE that utterly failed NHS and care staff and go on to waste up to £37 billion on failed test and trace given to incompetent private companies, after decimating public health and closing important programmes?

Or maybe it’s this: How can they sleep at night, knowing patients are dying waiting for ambulances, dying in ambulances waiting to be transferred to A&E, and dying in larger numbers after their urgent care is delayed by many hours or days?

We need to rehearse our lines and be fluent for the onslaught ahead. A well-funded NHS was the best in the world in 2010, and can be so again if supported by a government that believes strong public services are not only fair but an investment in a healthy and educated society. Scotland may not be on the frontline of the attack on the UK’s NHS, but we have seen a glimpse of what could be considered, in ending a universal, publicly provided service, when defunding drives it to failure.

Scotland and Wales can be proud that they resisted, until now, the worst excesses of privatisation foisted on the English NHS. The best thing we can do for the NHS across all parts of the UK is to defend it vocally, to counter the lies, and to demand that opposition parties pledge to rebuild—a publicly owned, provided, and managed NHS.