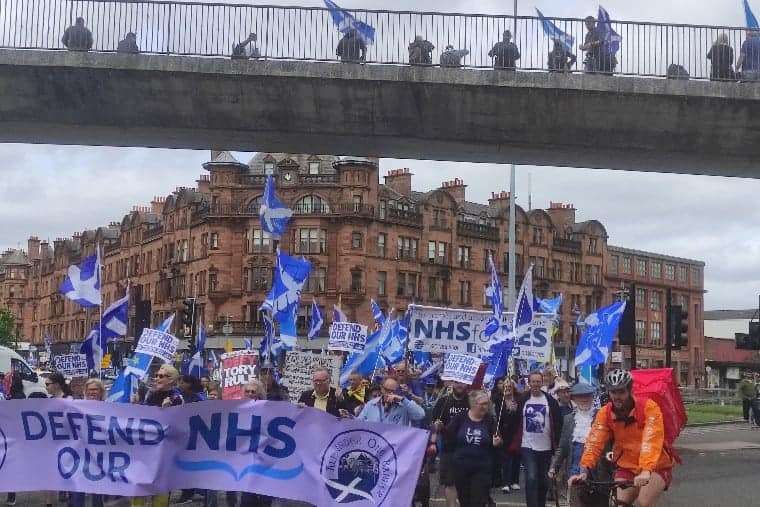 An All Under One Banner march for Scottish independence themed around the defence of the NHS in Glasgow in May (Picture: Glasgow SWP)

The Supreme Court has denied the Scottish Parliament the right to hold another independence referendum without Westminster’s approval. Protests were scheduled across Scotland after the verdict on Wednesday.

The unelected and unaccountable court’s decision is a democratic outrage. People in Scotland have repeatedly given a clear electoral majority to the Scottish National Party (SNP) and other parties that want to hold such a vote. The SNP had said it will hold a referendum on 19 October next year.

But the verdict will please the Tories. They fear a new vote could back independence and break up the British state, raising further questions about the future of Northern Ireland. And although they won’t admit it, the more neoliberal sections of the SNP will also be content.

They will now reiterate that if you want independence, whatever your views on other matters, you have to vote SNP at the next British general election.

Scottish first minister Nicola Sturgeon has said the SNP will “put our case for independence to the people in an election”, turning it into a “de facto referendum”. Sturgeon responded to the court in typical pallid fashion, saying, “I respect the ruling of the Supreme Court—it doesn’t make law, only interprets it.”

She added, “A law that doesn’t allow Scotland to choose our own future without Westminster consent exposes as myth any notion of the UK as a voluntary partnership and makes the case for indy.”

The SNP is so cowardly, so tied to the present system, that it won’t call for the massive social disobedience and strikes needed to defy Westminster. Anas Sarwar, the Scottish Labour leader, said Scotland must now “focus on the problems facing our country”. Labour has always lined up with the Tories to defend the British state.

And Labour, once so dominant in Scottish politics, has let down working class people in Scotland. That’s a major reason why support for independence and the SNP has grown.

Is the Scottish independence movement in crisis?
Read More

The SNP’s strategy of appealing to successive Tory governments for permission to smash up the Union has failed.

It relied on the institutions of the British state, not on mobilising mass support for independence on the streets combined with civil disobedience.

This is not a problem for the SNP leaders’ vision of an independent Scotland. It is a vision of a neoliberal capitalist state inserted in the pro-corporate European Union. It is of a no-change Scotland except for the national trimmings.

On Thursday in Scotland tens of thousands of teachers, Royal Mail workers and university workers are set to strike. Their resistance is far more fruitful than the SNP’s tame opposition.

What was the case about?

In 2014 the Tories allowed the Scottish parliament to hold an independence referendum. People voted to stay in the United Kingdom. But since then, the pressure for a vote has grown massively, driven by disgust at the Tories.

The argument before the court came because the Tories have said they won’t grant the right to hold another referendum.

Scotland’s top law officer, Dorothy Bain KC, referred the case to the Supreme Court. This was due to uncertainty over whether the Scottish parliament could legislate for a second independence referendum while Westminster opposed this.

She argued that a referendum would be “advisory” and would have no legal effect on the Union.

But Sir James Eadie KC, the British government’s barrister, said it was “obvious” that the bill related to reserved matters and the Union.

The court unanimously decided that the proposed referendum related to reserved matters. And that the Scottish parliament does not have the power itself to legislate for a referendum on independence.

Dumfries: Midsteeple area in the town centre, beside the Planestanes, 5.30pm-7pm

Selkirk: Selkirk Square and on to Kirk o Forest, 6.30pm

…and on Saturday 26 November

Glasgow, 1pm-3pm, BBC, Pacific Quay. Called by All Under One Banner