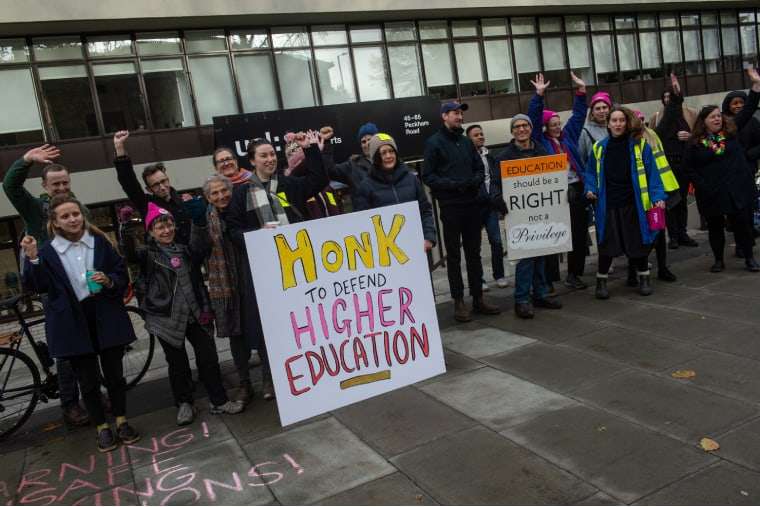 Around 70,000 university workers across Britain launched the first of three strikes over pay, working conditions and pensions on Thursday.

The UCU union members are the latest group to take to the picket lines as the cost of living crisis deepens. They were out alongside Unison union members at 18 universities and Unite union members at five who are fighting over pay, and 115,000 Royal Mail workers.

At two lively picket lines in Brighton, strikers said they’d never before seen that level of public support. Almost every car honked its horn in solidarity, lifting the mood of the pickets.

UCU member and lecturer Rosa was on the picket line outside the Centre for Contemporary Arts—which swelled to 30 people. “Workload is a major issue,” Rosa told Socialist Worker. “It means that in the evening, you’re effectively working for free. Stress has become a serious health and safety issue.

“Because of how much I work, I don’t often feel part of the university, but on picket lines with my colleagues I do.”

Workers’ anger has been fuelled by the Tory plans for a new wave of austerity. “I’m so frustrated and angry with the government,” striker Julie told Socialist Worker. “They’ll happily give handouts to the rich and oil companies, but not to workers.

“Sometimes I struggle to find even a bit of hope. But today gives me hope. Picket lines give me hope. We can’t wait for a general election to get change.

UCU members are fighting in two separate but connected disputes. The first is over bosses’ cuts to their USS pension scheme. The other is over pay, workloads, casualisation and equalities—known as the “four fights”.

George, another striker at Brighton, said increasing workloads mean being a lecturer is now a “lifestyle”, not just a job. “Over the years our workload has only become more intense,” he told Socialist Worker.

“A lot of departments in the university have closed. More people have left academia, and they haven’t been replaced. So the rest of us are left to pick up the pieces.”

Dawn, a Unison member at the university, said people “can’t afford to live in Brighton anymore” as inflation soars at a record high. “I know lower paid staff who are now being priced out of the town they were born in,” she told Socialist Worker.

“We are being asked to do more but getting paid less. A 3 percent pay rise was enforced on us in September, but we weren’t negotiated with.”

There were large and vibrant picket lines across Britain. Hundreds of pickets were out in Leeds. UCU striker Megan told Socialist Worker “Our boss is paid over half a million pounds a year to screw us.

“To screw us by increasing our workloads, cutting our pay in real terms over the past 12 years, by refusing to negotiate seriously over equalities. Really, there is nothing good we can say about this management.”

In Dundee, UCU members stood alongside Unite members, who were also on strike. At the university of Edinburgh, students held a banner that read, “Their working conditions are our learning conditions.”

Edinburgh UCU striker Meg told Socialist Worker, “I’ve got 90 essays to mark in three weeks. That’ll take 90 hours of work, and I’ll only get paid for half of that time. I do this on top of a PhD, teaching and another part time job.”

Over 90 people picketed at the University of Liverpool—and were visited by Royal Mail workers who are also striking on Thursday and Friday.

On Wednesday of next week, university workers are set to walkout alongside 4,000 NEU union members at sixth form colleges.

Half a million strikers could crush Tories
Read More

The march in London next Wednesday is an opportunity to send a powerful message alongside students and striking Royal Mail and sixth form workers.

UCU members are set to walk out on Friday and Wednesday of next week. Striker Ryan told Socialist Worker said they still needed to go further. “What happens next depends on the employers,” he said.

“The money is there for them to make a serious offer. They have billions in surplus and they could give us everything we want and still have a surplus. But if they don’t come to us with a decent offer, the plan is that we’ll shut down universities.

“Many branches have voted on a motion in support of indefinite action in the new year. I think the mood is there to fight until we win.”

Supporters of the UCU Left and other activists had put motions and amendments in favour of all-out strikes to the union’s higher education committee.

UCU general secretary Jo Grady says they’ll “shut down the campuses” in semester two—the best way to do that is to walk out and stay out.

Join the march in London next Wednesday. Assemble 1pm at Kings Cross.