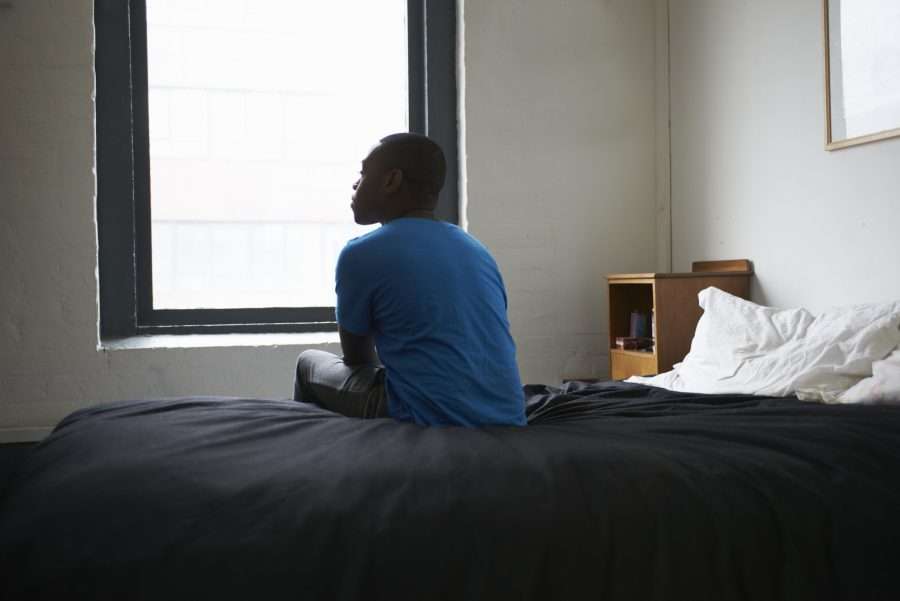 A recent survey found 95% of young people feel lonely, with more than half citing money as a key factor. When everything’s expensive, and any sense of community has been deliberately and consistently eroded, it’s no surprise.

Across the various different forms of social isolation, what remains clear is that it almost always bears a direct relation to material circumstances. (Tara Moore / Getty Images)

Last month, the Co-Op Foundation published new research which arrived at a not altogether surprising conclusion: as the cost of living crisis deepens, loneliness is soaring among young people. Based on a survey of 20,00 people aged between 10 and 25, the study found that an overwhelming majority (95%) feel lonely, with over half citing a lack of money as a key factor. For respondents at the younger end of the spectrum, this might be due to cash-strapped parents tightening the purse-strings; for those of working age, it will likely be their own pay packets taking the hit.

As everything gets more expensive—from rent to lager—lots of people are socialising less. Many are opting out of dating, too, either unable or unwilling to stump up £40 for what may turn out to be an evening of dispiriting chit-chat with someone who reads books like Management Consultancy Secrets from the Vaults of McKinsey. Financial precarity not only limits our ability to afford the necessities of life; it limits our ability to enjoy the friendships and relationships that make that life fun.

It can also have more serious consequences. As their lives have grown in isolation and preacrity, people have become more anxious and depressed, which is significant, because loneliness is both a cause and effect of mental illness. The associated stress has an equally corrosive impact on our physical health, affecting our immune response, blood pressure, and cognitive function—according to one oft-cited statistic, it’s as bad for you as smoking fifteen cigarettes a day.

But we should be sceptical of any approach which seeks to target loneliness as an isolated problem, as though it were a naturally occurring phenomenon or an unfortunate fact of life. The government already tried this: Theresa May introduced a Loneliness Strategy in 2017, which focused Big Society-style on funding community groups and group activities, as well encouraging us to tackle the problem ourselves with ‘simple acts of kindness’.

It’s no surprise that this approach, which determinedly refused to recognise the problem as a political one, failed to make a dent. For older people and those who are housebound for whatever reason, targeted interventions such as friendship programmes and home visits might make more sense. But for most young people, I suspect the problem is both simpler and more insurmountable: if our lives were less precarious, immiserated, and stressful, then our loneliness would be far less pervasive.

The cost of living crisis is building new barriers between us, but Theresa May’s 2017 intervention shows this isn’t a new phenomenon. It’s being exacerbated by the economy now, just as it was exacerbated by the pandemic. Neither of these factors, however, are fully to blame: a survey carried out in 2019 showed only marginally smaller rates of loneliness among young people. It would be difficult to pin-point when exactly this process began—you could argue loneliness is an inescapable feature of modernity or, less convincingly, part of the ‘human condition’—but there’s no doubt that in Britain, it’s been accelerated by the austerity politics of the 2010s.

This period saw the public sphere decimated. Hundreds of libraries and youth clubs were closed, public parks had their budgets slashed, and millions of miles of bus routes were cut, leaving people in rural areas stranded. We were left strikingly thin on the ground for social spaces that didn’t require us to spend money, but thanks in part to rampant property speculation and the local councils which cheered it on, the private sector didn’t fare much better: by the end of the decade, there were significantly fewer pubs, clubs, and music venues than there had been at the beginning, with the pandemic often acting as a final nail in the coffin. Socialising on the cheap shifts ever further out of reach.

At the same time, young people in particular now live in a state of increased transience, which makes it ever harder to build communities. Young people tend to move accommodation frequently, whenever the landlord hikes the rent, and have limited choice in where they go—where they can afford it, and where the jobs are. Even pleasant, low-level social interactions become more elusive when you’re always on the move—never mind engaging in your local community, or what remains of it, in a more substantive way. Precarity creates feelings of powerlessness and unease; it makes us feel as though our lives are built on sand. If people feel adrift, it’s because in a very real sense, they are.

Others have the opposite problem—a sense of being ‘stuck’, which is the key factor in their loneliness. This is something Jessie Kelly, an academic at Newcastle University researching geographies of loneliness, has found in County Durham, where ‘austerity cuts, disinvestment from central government, and a legacy of deindustrialisation can provide a fertile landscape for loneliness to flourish.’ Sometimes this feeling arises from having to wait months to receive appropriate healthcare; sometimes it’s related to insecure employment or bad housing. Not only are people unable to afford to socialise; they are exhausted and stressed.

Ultimately, Kelly argues, any initiative aimed at tackling loneliness which fails to acknowledge how decisions on the political and economic scale can entrench these issues is only ever going to be superficial. And to get that, we need to change how we talk about loneliness in the first place.

At present, the discourse around loneliness is too regularly dominated by the threat posed by incels or teenagers spending too much time on TikTok, and our attention focused on the spectre of the angry young straight man, who has become both an object of hand-wringing concern and a left-liberal folk devil (in part due to not unreasonable anxieties about his capacity for violence). According to Dr Annie Kelly, a researcher of antifeminism and the co-host of podcast Man-Clan, this risks creating the sense that ‘white male loneliness and alienation is a bigger problem than for other groups.’ Due to the ‘somewhat credulous’ way that incels in particular are often reported on, there’s also a mistaken assumption that loneliness is caused by a lack of sex—with the implied perception being that women are less lonely on the basis that they can have sex whenever they like.

On the other hand, there’s also an unhelpful backlash to the problem of straight male loneliness. ‘A liberal counter-discourse emerges that says being lonely is men’s own fault and suggests a deficiency in character in some way,’ continues Dr Kelly. ‘That’s dangerous, because it entrenches the message that far right and incel groups are sending to these men who they see as potential recruits: that society hates them, doesn’t understand them, and that only this violent place will offer them community.’ As I see it, mocking people for being ‘losers living in their mum’s basements’ should not form part of a left response to loneliness, not least because such a description no doubt applies to lots of people who are nice and have good politics.

Less talked about, by contrast, is the evidence that suggests migrants and refugees are at greater risk of loneliness—perhaps unsurprisingly, considering they’re more likely to face precarious work, racism and xenophobia, and the difficulties posed by language barriers—or the sharp increase in recent years in loneliness among disabled people, which—having always been disproportionately high—was made worse by the pandemic.

Disabled people in particular are likely to face additional barriers to socialising beyond lack of funds, which complicates the idea that simply giving everyone more money would solve the problem. Instead, for a response to loneliness to be adequate, it would have to respond to a variety of circumstances and needs from different demographics, whether that’s supporting the struggles of gig economy workers or thinking about how a rebuilt public sphere could be made accessible for everyone, in everything from its architecture to its childcare provision.

Across the various different forms of social isolation, what remains clear is that it almost always bears a direct relation to material circumstances. ‘We need to offer a more sociable way of life for young people than ‘the grind’, and life needs to become less expensive in order for that to happen,’ suggests Kelly. It’s hard to see how this can happen without major structural reforms: a public sphere that doesn’t require you to spend money to see your friends; an economy that relieves the stress currently involved in making sure you’ve got the basics of rent, heat, and food; time away from work to commit to other activities and learn new things, and common space to spend it in—to name a few ideas.

But it would also be a cop-out to say: sadly, you are doomed to be miserable and alone until the revolution: join a union and good luck! There could still be some merit to the more individualised, self-help pieces of advice: make the effort to get in touch with an old friend, message someone you know from the internet and ask them if they want to go for a cheap pint, join a community group (and if you got involved with something like ACORN, for example, this has the additional benefit of working to tackle a deeper cause of isolation).

These are not in themselves political. But one of the best forms of nourishment and strength in the push for structural change—and against despair—is the reminder that even in the face of terrible constraints, the impulse for connection can break through.