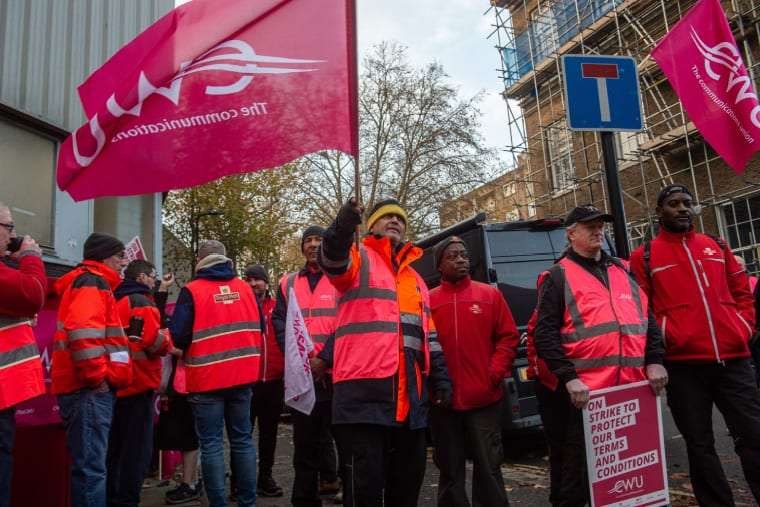 Royal Mail workers were back on strike for the first time in a month on Thursday. The walkout came after a long period of talks ended with bosses demanding union leaders sign up to 10,000 job cuts.

In a “final offer” bosses said they would give a 7 percent pay increase, plus a lump sum of 2 percent. It’s still a big real-terms pay cut—and in exchange for that, they want workers to give up thousands of jobs and almost all of their hard won conditions.

“The union’s been in talks at Acas for about seven weeks and nothing’s changed,” Rick, a striker at Abbeywood and Thamesmead in south east London told Socialist Worker. “Royal Mail only wanted Acas to make the union agree to their plans.

“It’s frustrating because you think you’re nearly there with a deal and then it’s off the table.”

Royal Mail’s full offer after talks at the Acas conciliation service included a plan for mass redundancies, with some workplaces losing up to 30 percent of people. Bosses want to replace them with an unlimited number of owner-drivers.

They also want seasonal hours—working longer days in the winter—new forms of electronic monitoring, and deliveries as late as 5pm.

It’s a vision for a Royal Mail much closer to “gig economy” style parcel couriers. And it comes with cuts to premium payments and overtime rates. Union reps would have no say in how changes get made in their workplaces, which the 2 percent lump sum depends on. And if bosses decide the changes aren’t successful, they won’t even pay the 7 percent.

“People think we’re just striking for pay—but it’s also about our futures,” Spencer, a striker in Woolwich, south east London, told Socialist Worker. “Royal Mail wants an Uber-style job. Come in, scan a few parcels, it sets a route then off you go.”

And Rick said, “What they’re moving to is a zero hour contract. That’s what their vision is. To have you in when they want you in and when they don’t want you in you won’t get work.

“It will all be afternoon and evening stuff. The postie turning up at your door at eight in the morning with your letter or your birthday card, they want to do away with that.”

It all amounts to an existential attack on the whole of Royal Mail and all the jobs that depend on it, as CWU union leaders explained on Wednesday evening.

“They want to casualise this industry, put your jobs at risk, and run you into the ground,” CWU acting deputy general secretary for post Andy Furey said. “Their agenda is to get rid of permanently employed people, get rid of your terms and conditions and have a hire and fire attitude where they will treat you like the gig economy.”

Bosses brought in agency workers, who’d been told the Royal Mail workers were on holiday. CWU strikers convinced them not to cross the picket line—with the support of 100 FBU firefighters’ union members.

One CWU member reports, “Managers were like who are all these people, they don’t even work here? I said they’re firefighters standing with us, unlike you. It’s called solidarity, I don’t expect you to understand. One manager looked so ashamed he was about to cry.”

An all-out assault should be met with all-out action. Yet union leaders so far haven’t met bosses’ latest ultimatum with escalated strikes.

CWU general secretary Dave Ward instead said the union would announce “other tactics” in the next week. He also still hopes that Royal Mail bosses will accept the union’s alternative business plan.

He said on Wednesday that this would likely mean the union would sign up to a “genuine” offer of 9 percent—a real-terms pay cut. It would also mean accepting “reasonable change.”

Royal Mail has also systematically targeted reps and activists with suspensions for activity on picket lines. In response, Ward and Furey warned strikers to “picket peacefully.”

But in any case, bosses have proven they’re not interested in the CWU’s plan. CWU leaders had hoped last month that by calling off some strikes and “de-escalating tensions” bosses would reward them in talks. Instead, they took the opportunity to push home their assault.

Chris, another striker at Abbeywood and Thamesmead, said, “We honestly believed a deal was going to come through and the union did too. But Royal Mail have given the union false hope of an agreement.

“When the talks first started chief executive Simon Thompson made commitments that he’d be at the meetings and then didn’t turn up—right from the beginning. So why we expected anything different at the end is beyond us as well.”

Lots of strikers see Thompson as the main obstacle to winning the strike. “A deal could easily be made without Simon Thompson in charge,” said Chris. “It seems like the board of Royal Mail are willing to negotiate but when it comes to the crunch Simon Thompson says no and puts a block on it.”

Yet they also know that bosses on Royal Mail’s board have wanted to force through those changes ever since it was privatised in 2010. And they’ve backed previous CEOs Rico Back and Moya Greene, who tried and failed to get it done.

“All Simon Thompson has done is carry on what Rico Back started,” said Chris. “He’s working from what Back had planned.

“It annoys Royal Mail that we’ve managed to work through privatisation, and now they see it as another opportunity to make money for shareholders.”

So plenty of strikers also know they have to keep fighting. And they know that it’s good to be striking alongside others. “If we don’t stand up now, we’ve got to forever accept less,” said Spencer.

He added, “It’s definitely a good thing with everyone striking together. It does help. Look at the nurses—when would you have ever thought that nurses would be on strike. It must be bad. Everyone knows about the rail workers and what they’re going through.

“When we first started this dispute the barristers were out as well. Everyone’s just had enough.”