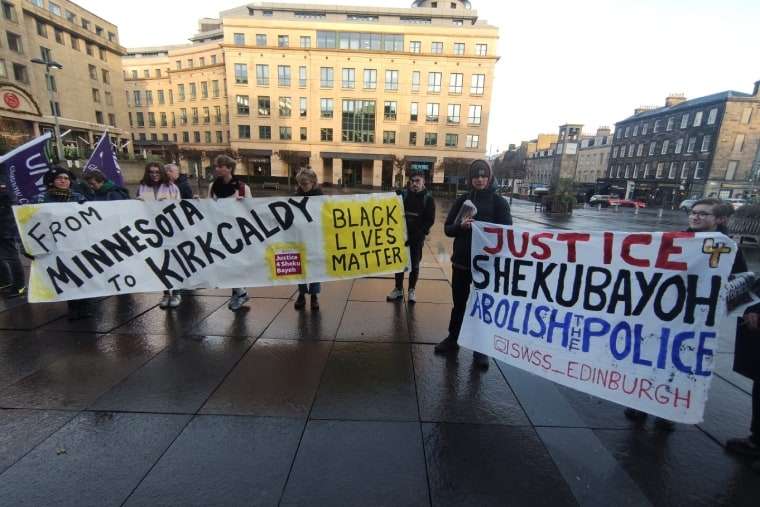 Students demand justice for Sheku Bayoh outside the inquiry

The inquiry into the death in 2015 of Sheku Bayoh after contact with police restarted in Edinburgh on Tuesday after a four-month gap. It was marked by a vigil outside the building attended by around 200 people in solidarity with Bayoh’s family.

His sister, Kadi Johnson, said to the vigil, “Thank you very much for being here today, standing in solidarity with me and my family. I have been asked if Sheku had not come across the police will he be alive today? Well, I believe he would be.

“I have asked the inquiry to please tell me how and why my brother had to die in the custody of the police, but seven years on we are still waiting for the answers, so far all we got were lies. It has been a tough journey and along the way we have faced a lot of disappointment as well as racist abusive messages, even up to last night I had racist messages sent to me.

“We are in for a long haul with the inquiry and your support gives me the strength and the courage to keep pressing on till justice prevails. Unity is power, justice for Sheku Bayoh.”

The vigil was organised by the Scottish TUC union federation and Stand Up To Racism, with trade union activists from Unison, Unite, UCU, EIS and Usdaw as well as the STUC black workers’ committee and a coach full of activists from Glasgow in attendance.

Sheku Bayoh has been referred to as “Scotland’s George Floyd” by his family. On 3 May 2015, police received a call about a black man acting erratically with a knife. When police found Bayoh, he walked past them.

Incapacitating spray was used and he was subsequently pinned down by six officers, and bound with ankle and hand restraints. He died in hospital shortly after, having suffered multiple injuries, including a broken rib and extensive bruising.

Lord Bracadale, the inquiry’s chair, began the hearing by condemning racist abuse received by Bayoh’s family and their solicitor, Aamer Anwar. The fight for justice continues.