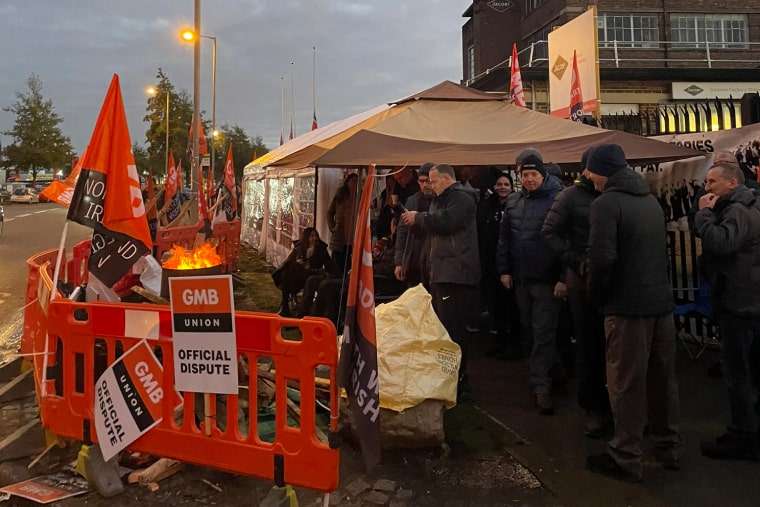 Jacob’s workers are standing strong on the picket line (Picture: @mickclarkus73 on Twitter)

Jacob’s cream cracker factory workers in Aintree, Liverpool, are “united on the strong picket lines” in their ninth week of strikes and second of all-out action.

The 751 workers make 14,000 tons of cream crackers every year, as well as Jaffa Cakes, Twiglets, Mini Cheddars and Club bars. And the McVities factory in Carlisle—owned by parent company Pladis—has also voted to strike over the 4.25 percent pay offer.

Meetings at the Acas conciliation service began on Wednesday, and carried on late into the night. “There’s still not been a breakthrough,” striker Liam told Socialist Worker. “We’ve not heard anything yet, but they are ongoing.”

Liam explained that management have been using “dirty tactics” to try to break the strike. “They’ve been running the packing lines while we’ve been outside and started to lie more,” he said.

“The escalated action is hurting them. They’re bringing people in to cross the pickets in the backs of their cars. Managers have been aggressively driving through the pickets too, nearly hitting us.

“We were told there’d be no more mini-buses or coaches going over the picket line because the people going in had been laid off as they’re seasonal workers. But there’s still minibuses going over during the day and at night with those workers in—we’ve seen them.”

“The windows are blacked, but we think it’s just a handful. The general manger said not there’d be no one else going in—bar the fitters and engineers already in there. So they’ve lied to us.”

Liam said that “four wagons turned up in the early hours of the morning with the police to move everyone out of the way”. They were carrying seasonal workers who make the Christmas cheese crackers.

Last week the strikers were visited by the Liverpool dockers, who struck for five weeks and won a pay deal of between 14.3 and 18.5 percent.

“That was a massive boost,” Liam said. “People here said it was amazing. We’ve not seen anything like it. All of a sudden, a big yellow wave of high viz came to the picket line. They gave us a big donation and food too. It’s good to get their support.”

Strikers are “frustrated” that the company is not trying to make a deal. But Liam said, “The picket line is still going strong—everyone is united and our spirits haven’t been broken. Carlisle shows we’re not alone and another site is also not happy with pay.

“Carlisle has had a lot of money invested in it because they had flooding. We’re happy they’re out and on the same page as us.”

Liam explained that the Jacob’s site is “losing around £1.2 million a day”. “The last offer was 4.25 percent—that works out around £400,000 a year,” he said. “They’ve also tried to shift production to Portugal to undermine the strike.”

The bosses were blocked after the GMB challenged them on legal grounds. Liam explained the move “would’ve hit profits by 40 percent”. “It doesn’t make sense why they’d take that hit rather than pay us what we’re asking,” he said.

Two strikes were sacked after a nine-second video was released of the strikers joking about the scab workers. “We heard from the union there was no evidence to support the disciplinary action,” Liam added. “And our managers couldn’t make the decision, so they brought someone in from Wigston to sack them.

“The union is appealing it—they said in the negotiations they want them brought back in. The management wears body cameras, so when we go back in there might be more. We’ll need to be ready for that.”

The Jacob’s strikers should continue to stand firm against their management—and be ready to battle for more as the cost of living crisis continues to spiral.

Donate to the strike fund at bit.ly/Jacobsfund