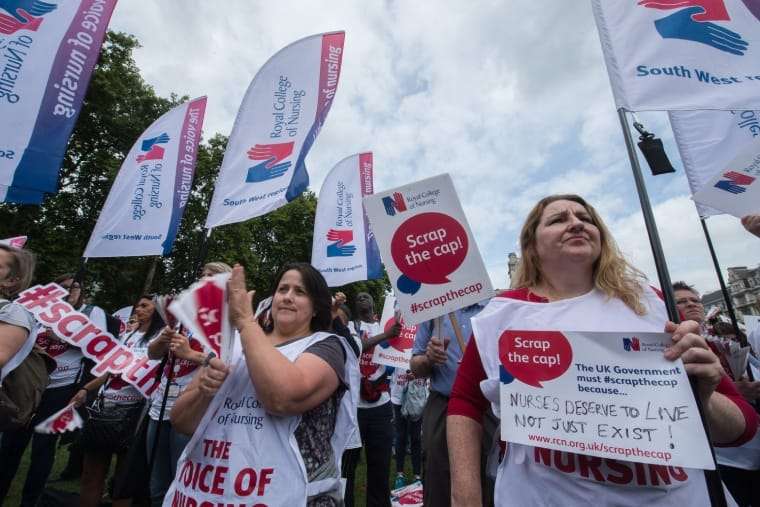 Nurses plan to strike for two days next month in a fantastic escalation of the pay battle spreading across Britain.

RCN union leaders in England, Wales and Northern Ireland are set to announce on Friday that they’ll stage their first walkouts on Thursday 15 and Tuesday 20 December.

That will mean picket lines outside hospitals across much of Britain for the first time in years. And, there will be huge opportunities to turn them into a focal point for resistance for everyone under attack from the Tories and the bosses.

With hundreds of thousands of workers already in dispute, the nurses’ strike news should raise the political temperature to feverish levels. The strike on 15 December coincides with a planned Royal Mail strike. Other unions should schedule action on the NHS strike days.

Lucy, an A&E nurse in the west of England with 14 years experience, says the coming strike reflects a “sea change” among nurses. “When I first started my job I never thought I’d see us striking,” she said.

“But now we’ve really had enough. We went through the first round of austerity, the three-year pay freeze followed by the below-inflation rises. Then we saw all the Tory scandals. We had the Test and Trace and PPE contracts handed out, and bankers’ bonuses and so on. People are just not willing to accept low pay anymore.”

Lucy told Socialist Worker that young nurses in particular won’t be taken for granted, and were a big part of winning the ballot where she works. “I don’t know if it’s a generational thing, but all the young nurses around me voted to strike,” she said. “Some of the others have gone to Australia to get better pay.”

With the government digging in its heels, Lucy thinks that the union will have to call “serious action” to force ministers to give in. She is absolutely right.

The RCN says it will announce which NHS employers will be hit when it submits formal notifications next week. The union beat the turnout thresholds demanded by anti-union laws at 176 employers, and only narrowly missed at many others.

The government imposed a lousy 4 percent “pay rise” on almost all NHS staff this autumn and then ended negotiations. The RCN is fighting for a fully-funded pay rise that is 5 percent above the rate of inflation.

That should mean only an offer close to 20 percent can settle the dispute. That, it rightly says, is the only way to stop the haemorrhaging of health staff and to fill the tens of thousands of vacancies across the NHS. Until there is safe staffing on every ward, patients’ safety will be at risk.

In Scotland, the RCN has put off announcing its strike dates—despite winning a ballot—because the Scottish government has reopened pay negotiations. The Scottish National Party administration offered a flat rate rise of just £2,205—but it is now thought to be making a slightly improved offer to nursing grades.

Meanwhile Unison, the largest health service union, closed its strike ballot this week and results are expected by the middle of next week. Other unions, including the GMB, Unite, the Chartered Society of Physiotherapy and the British Dietetic Association are all also balloting for strikes.

A widely-hated and weak Tory government could be thrown further into crisis by the growing wave of strikes. To make sure that happens, every activist and trade unionist must now prepare to surround striking nurses with a wave of active solidarity, including walkouts, lunchtime rallies and mass delegations to picket lines.