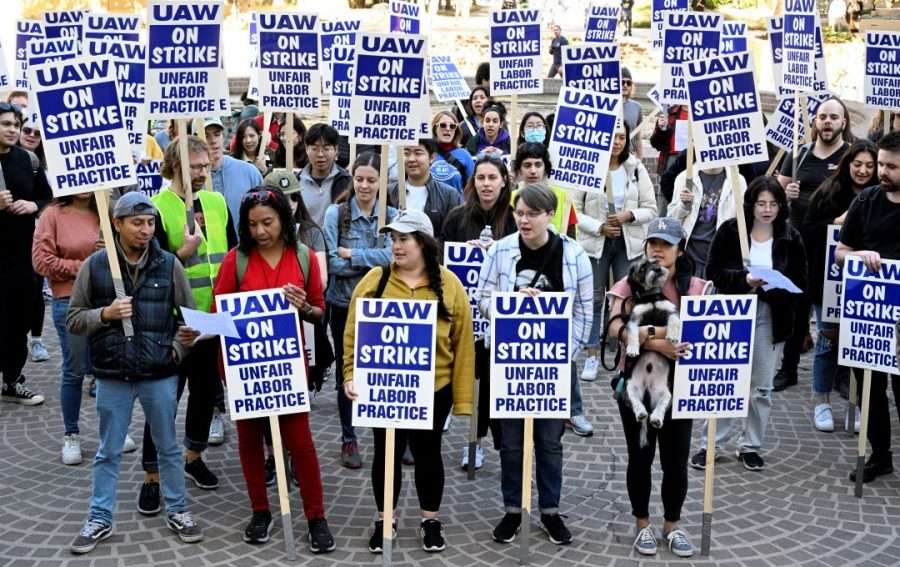 The massive walkout at California’s flagship public university system is the largest strike in the US in recent years, and it’s now in its second week. Jacobin spoke with striking grad student workers at UC Riverside and UC Irvine.

About 48,000 union workers walked off the job at UCLA and nine other UC campuses across the state, in Los Angeles on Monday, November 14, 2022. (Brittany Murray / MediaNews Group / Long Beach Press-Telegram via Getty Images)

A strike involving 48,000 graduate student workers, postdocs, and academic researchers across the University of California system is wrapping up its second week. Organizers say that the strike is the largest academic strike in US history; it also happens to be one of the largest strikes, period, in the country in the last few years. Last Friday, November 18, Jacobin’s Sara Wexler spoke with striking grad student workers at UC Riverside and UC Irvine about their demands and their experiences during the strike.

Can you tell me why you’re on strike today?

So, our classrooms are overcrowded, our workplace buildings are often in dangerous disrepair and inaccessible, and our wages are low. But rents are still high. Our labor as academic workers is what keeps the University of California running. And yet the UC refuses to compensate us thoroughly, make our workplaces truly accessible, or bargain over these issues in good faith. That’s why thousands of academic workers like myself are on strike and will need to be on strike until the university comes to the table in good faith and stops engaging in unfair labor practices.

I don’t think a lot of people realize how much of a toll that takes on you. It’s almost like being followed all the time. You have this feeling of uncertainty, this feeling that you have to be super careful with your money — otherwise, you literally cannot continue doing what you’re doing.

That’s also super relevant to our department, where the majority of students are international students. One of our current asks is getting rid of supplemental tuition for international students. Because that really does not make any sense to require people from countries whose currency may not even be able to compare to the US dollar to pay double what residents pay.

I think the university expects a certain quality of work: we got to produce several papers, we got to show up to classes, and we got to teach on top of that. So, they expect us to handle all those things, while we’re worried about whether we’re gonna have enough money for food.

To know that other people have that feeling has been really interesting. One could talk about things theoretically or just about not getting paid enough. But what does it mean? What are those feelings that we all kind of share?

That’s where we all kind of start to connect. At least this week, what I’ve seen, everyone’s feeling more comfortable with each other. And I asked myself, “Why is it that it’s taking so long for people to get comfortable next to each other?” I think that I don’t know what’s going on with the school; we just come here and work and then go back home, and that’s it.

There’s none of these social spaces — not until these types of things happen. There’s music, there’s dancing, there’s all these things.

What was the organizing like leading up to the strike?

I think, over the past couple of months and years, people have been pushed to the brink. Being unable to afford rent, having to make decisions between gas and food, is what has brought us to this point — having to suffer low wages from what purports to be one of the world’s most prestigious universities while continuing to serve the university’s mission and trying to serve our students the best that we can and conduct cutting-edge research, has really pushed people over time to the point where thousands of people are willing to go on the picket lines.

Being unable to afford rent, having to make decisions between gas and food, is what has brought us to this point.

Something that’s really impressed me with the organizers is how quickly and efficiently they were able to mobilize everybody. We didn’t have any false starts. We didn’t have any groups that were lagging. I think that has a lot to do with the organizers and how they were able to draw out a lot of those passions and frustrations. A lot of frustrations are left over from how the administration handled COVID and is still not handling COVID well.

How exactly did it start?

We went into bargaining earlier this year to negotiate what our next contract will look like. During the many months of bargaining, we’ve made strong proposals on issues such as the right to dignified and fair compensation and increasing the rights of international scholars at the university, but progress has continued to be threatened at the bargaining table by the university’s unlawful conduct. The decision to move forward with the multiunit, statewide strike that we are currently engaged in was made after these months and months of increasing frustration with the university’s lack of progress or lack of willingness to bargain in good faith.

How has the strike been an organizing tool?

I think going on strike has brought so many of us together, more than ever before. We are all taking to the picket lines, because we all face the struggle and suffer low wages and inaccessible workplaces. We’re having to deal with additional costs such as visa fees that other employers that are not the University of California would cover for their employees — international academic workers at the University of California have to pay for their own visa fees in addition to other fees, just because they’re from another country.

One of the coolest things to see is how the strike has helped us overcome institutional barriers. Because of how the university is organized, it can feel very disjointed. Oscar and I are in the Language Department, and we just tend to stick together. We just know each other, and that’s it basically.

But what I’ve seen with this strike specifically is that we have been able to make meaningful connections with graduate students in other departments, within days or hours of meeting. I don’t think that would have happened if the strike hadn’t given us that space to meet and make those connections.

I think the strike has been helping with opening up that kind of communal space, or at least the possibility of such a thing. This has allowed us to see graduate students recognize each other, that we’re also here in the school. We’re in different buildings, but we’re here.

It’s hard for me not to think about it affectively. We’re able to make some music together. Yesterday, we went through some buildings and opened the doors to classes that were in session; we’re just singing and yelling and everything. People have gotten more prepared — they’ve brought their own drums and brought their different instruments — and we’re just kind of chanting everything together. It’s just something I didn’t expect, because I’ve never really been a part of anything like this.

We have the “tag” of a student, and the university kind of tries to use that against this. Because we’re workers, at the end of the day, and I think to say we’re students is to say you’re still kind of like a middle school or high school student. They don’t really treat us seriously, because we’re students. That’s the way it feels. And I think this has been breaking that identity in a way.

The university doesn’t really treat us seriously, because we’re students.

What do you hope to win from the strike?

We’re going on strike to ensure that we’re able to win a fair contract that includes compensation, that includes a democratic workplace. Like I mentioned earlier, that also includes broadening rights for international scholars.

At Riverside, we have so many students who come from frontline communities in the Inland Empire, and who are looking to go to college and learn more about the world and bring that knowledge back to improve and make progress in their communities. So, we’re also fighting for a smaller classroom. A more accessible workplace also means more comfortable classrooms for all of us. This is a fight not just for academic workers but for the future of the university.

How have the undergraduate students responded to the strike so far?

Getting support from everyone has been amazing. The show of support we’ve seen from undergraduate students, from faculty members, from other workers, from committee members and elected officials shows that so many people understand that our fight for a fair contract is just.

From what I’ve seen so far, there seem to be two very polarized reactions to what’s going on. We have the people that are 100 percent for what we’re doing, the undergrads who have literally joined us on the picket line from day one. They’re not going to classes.

I saw on Twitter a couple of days ago that the UC had actually done a report that said that 5 to 11 percent of grad students across all of the UC campuses have experienced food insecurity or homelessness. I would like undergrads to take that to heart and to understand how serious this is.

So many people understand that our fight for a fair contract is just.

If folks are nearby, we’re asking that they join us on the picket lines, and you can find that information at FairUCNow.org. There’s also a hardship fund that people can donate to and sample letters of support or other materials that people can use.

More bodies here would be nice! If people join us on the picket line or share some information, that can help out.

It’s been a huge morale boost seeing former students on the picket line with us. I think that sometimes undergrads don’t realize that, in this particular struggle, they have a lot of power. So having people with that kind of power — undergrads, nonstudents, staff on campus, and also professors — coming to support the cause is one huge way of helping.

This is draining. Doing this has a physical, emotional, and mental toll. So, being able to be there for us as people, I think, is also huge, especially if we’re going to have to do this long term. If we don’t have that support as individuals with limited capacities, we’re not going to be able to make it; we’re just going to burn out, we’re going to crash. So, I think having that support and having those people is absolutely key right now.