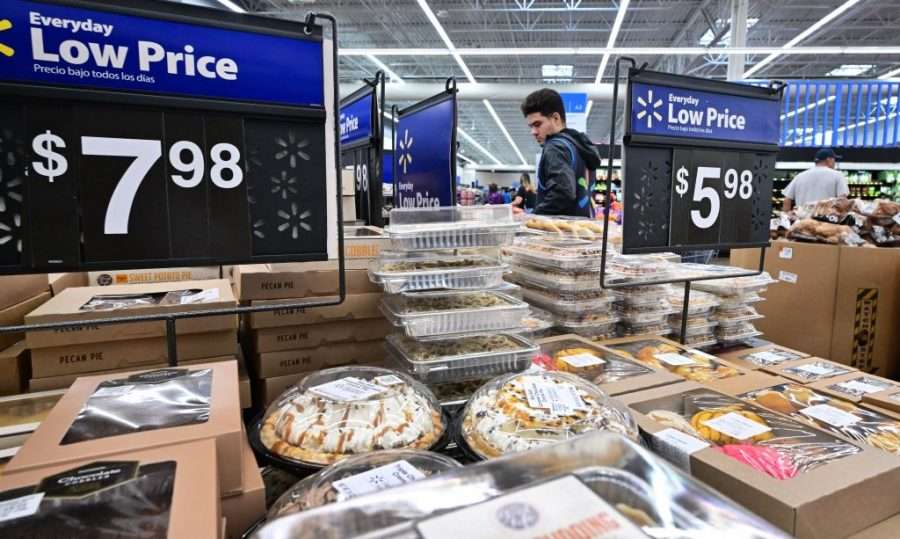 Months into the Federal Reserve’s quest to engineer a recession, ordinary Americans are feeling the pinch. Meanwhile, without the balm of rock-bottom interest rates, we’re getting a glimpse of how much of the American business world has been built on fraud.

Desserts are seen for sale at a Walmart store in Rosemead, California on November 22, 2022. Inflation in the United States has soared to the highest levels in recent decades, leading the Federal Reserve to embark on an aggressive campaign to cool the world’s biggest economy. (Frederic J. Brown / AFP via Getty Images)

The Federal Reserve shows no signs of stopping its barrage of rate hikes anytime soon — and the US public is already seeing the effects.

A brief catch-up: to deal with the acceleration of prices brought on by the effects of the pandemic and the war in Ukraine, the Fed decided to start gradually raising interest rates after a long period of exceptionally low rates. This, they hope, will tamp down consumer demand, by imposing “some pain” on average American workers — even as the Fed chairman admits all this will do nothing about the rise in food and fuel prices. To that end, the Fed has raised the short-term interest rate four times straight now for a total of three percentage points.

Little by little, we’re starting to see the effects of this. For example, take the agricultural sector, which relies heavily on credit between harvests to pay for virtually everything that goes into farming. Interest expenses are set to rise nearly 40 percent to $26.5 billion this year, substantially more than in other sectors like retail and motor vehicles, with the Federal Reserve Bank of Chicago recently finding that feeder cattle loans and farm real estate loans in the Fed’s Seventh District — comprising five Midwestern states from Michigan to Iowa — had reached their highest figures in more than a decade. As a result, farmers are now wrestling with how to afford their suddenly more expensive debt, with some considering planting fewer crops next year — which could, ironically, itself make food prices go further up.

Small businesses — the sacred cow, at least rhetorically, of US political discourse — are also feeling the pinch. According to the Wall Street Journal, 46 percent of the six hundred small business owners it surveyed this month said higher interest rates were affecting their business, with some putting the kibosh on expansion plans. Much of that is from small business owners finding it harder to service their loans, but it’s also a product of dampened demand: one firm profiled by the outlet, a manufacturer of rooftop solar systems, has seen sales fall due to the higher cost of loans for residential customers to finance such construction.

As that suggests, ordinary US consumers are likewise not being spared. The average credit card interest rate has hit 19.04 percent, the highest since Bankrate started keeping track of rates thirty-seven years ago, and just above the previous record figure of 19 percent from 1991.

This is particularly concerning, because while cost-sensitive consumers are avoiding other types of debt, they’re still applying for credit cards at high rates. It’s low-income Americans who are more likely to rely on them, and credit card borrowing is the highest it’s been since the Great Recession, according to Wells Fargo economists. Besides this, as they point out, by relying on credit cards to maintain a pre-inflation standard of living, consumer spending is being propped up, in turn running up against the Fed’s strategy for bringing down prices. And credit cards are only the half of it: private student loan rates have soared, while the average long-term mortgage rate is more than double what it was last year.

And there’s more to come. Looking around at the (compared to previous years) healthy state of Americans’ savings accounts, the Kansas City Federal Reserve Bank president Esther George recently pointed to them as a reason to keep interest rates higher and for longer, because “if those savings are spread more evenly across the population, including households with a higher propensity to spend out of their wealth, then the effect on the persistence of consumption is likely to be larger.” In other words: because more low- and middle-income Americans were able to save up a bit of money during the pandemic, the Fed has to keep interest rates high until those savings are ground to a pulp, too, in case families dip into them to buy goods and services.

Besides the negative effects the Fed’s hikes are having on American workers and their job prospects, they’re also having some other, unexpected results. Political observers have been rapt with the chaotic bumbling of Elon Musk’s three-week-old takeover of Twitter, which has seen thousands of employees laid off in an attempt by the Tesla founder to cut costs and streamline the operation. This is most directly due to Musk’s incompetence, but that incompetence is the end point of a series of events triggered by a wider downturn in the tech sector that goes beyond Musk, and beyond even Twitter ― a downturn being exacerbated by the Fed’s rate hikes.

For years, tech start-ups, even wildly unprofitable ones, have been kept afloat by a seemingly limitless fire hose of cheap money that’s now coming to an end under higher interest rates and stubborn inflation, leading to what one industry figure has called “the steepest and widest drawdown for a generation” in tech. Venture funding in the third quarter of this year fell by 53 percent from 2021 and by 33 percent from the previous quarter, and more than seventy-three thousand tech workers have lost their jobs over this year as of mid-November.

More broadly, the new situation is exposing how many business models that flourished before the tightening amount to borderline scams. Most spectacular, of course, has been the implosion of the cryptocurrency industry, with its endless layers of fraud and gimmickry. But another group suffering from the end of the era of easy money has been the corporate raiders of the private equity (PE) industry. PE firms and their debt-laden buyouts of companies had similarly had an extended boom largely thanks to the long period of low interest rates that followed the crash of 2008, and are now also being challenged by the higher cost of debt, coupled with the lower returns.

Investment advisors Wilshire have warned rate hikes would be a “headwind” on the industry, and big banks are pulling back on their financing for big PE deals, with the number of PE deals in the Chicago area alone falling from 446 in 2021 to fifty-nine this year. The volume of all PE buyouts closed this year was down 25 percent from last year, while leveraged buyouts — the debt-heavy takeovers the industry is virtually synonymous with — plummeted from nearly $100 billion worth of deals globally in the second quarter to just $12 billion in the third, according to Bloomberg.

Few will shed tears over these developments, though: the PE model is known mostly for stripping companies, including ones with important social value, of all they’re worth while loading them up with debt, making a profitable escape before the unlucky victim goes under.

It’s working families that will be hit hardest by the Fed’s determination to cause a recession, but as we can see, the resulting turbulence will be spread across all sectors of the economy, leading to all kinds of outcomes and sociopolitical shifts we can’t really even predict yet. But underneath it all is the singular irony that all of it may be for nothing: a recent Bank of America survey of fund-managers found that a whopping 92 percent think that we’re careening toward stagflation, aka high unemployment and high inflation. Smoke ’em if you got ’em.