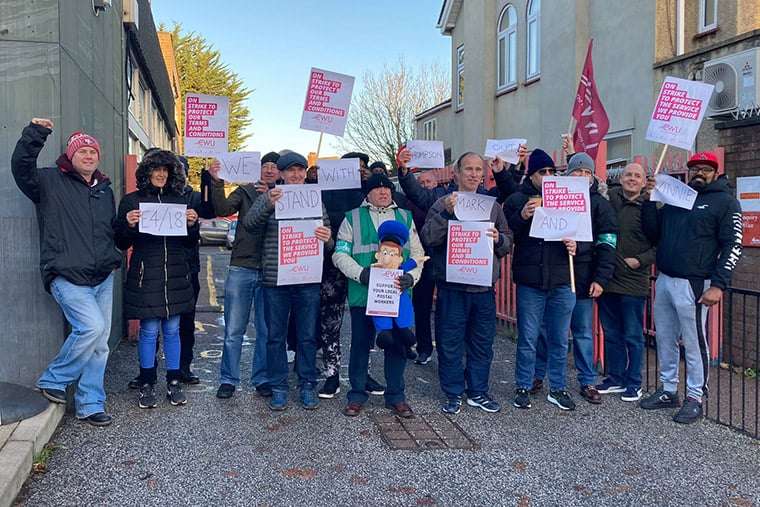 It was a public show of support that lifts the lid on a wider management offensive of suspensions and possible sackings. It isn’t the key way that Royal Mail bosses are trying to defeat the strikes, but it’s part of the strategy.

Socialist Worker knows of important examples. In Coventry Royal Mail suspended Liam Breen, a late shift driver’s rep, on spurious claims of threatening behaviour. A manager had attempted to deliver post to Liam’s home on a strike day. The alleged offence was not even in the workplace or on a picket line.

Liam has now been dismissed. There are two other Coventry reps who are suspended for spurious claims of inappropriate and threatening behaviour on the picket lines.

The Coventry Hubs Facebook page says that Liam’s dismissal “has drastically diminished the representation that the distribution members will receive at The Coventry Hubs. And (should the decision not be overturned) the membership will feel exposed at not having the determination and security of someone who has always put his membership first. Unfortunately his removal feels like a sign of things to come should Royal Mail get their way.”

In Nottingham Royal Mail suspended two rep at one of the best organised offices. Management have also suspended reps in South East Wales (Cardiff) and Gwent (Newport) on trumped-up charges. One CWU member was targeted for using a flare on a picket line.

In Leicester a rep was suspended. Pickets are angry as there’s a massive amount of respect for him and they want to defend him.

A senior CWU rep told Socialist Worker that nationally bosses have suspended 59 CWU members, including a large number of reps, since the strike began. Some have been reinstated, but the large majority are facing disciplinary measures that could involve the sack.

The CWU nationally isn’t talking about the onslaught, partly because it fears it might demoralise people. But its main concern is that if the scale of the offensive were known, then there would be a groundswell of calls for immediate walkouts. Until quite recently a common response among postal workers was to strike—unofficially and without a ballot—as soon as a worker was disciplined in this way.

Strikes—who’s out and when
Read More

Many activists remember that tradition. The union holds them back by talking of ballots in the future to contest the disciplinaries. And through pleas not to be drawn into action that might lead to legal challenges against the whole dispute.

The result is that bosses can declare war on activists and decrease the militancy of the picket lines. It signals to activists they could be abandoned. That’s why it’s right to walkout to stop the attacks and defend the union.

The strikes are still solid. They are not crumbling, despite the fantasies of Royal Mail chief executive Simon Thompson and his eager management followers. Thompson claimed this week that the number of people breaking the strikes was up 84 percent.

But, as many workers pointed out, 84 percent of nothing is still nothing. In most offices there is no scabbing. In some there are a few going in, but not enough to begin to run anything like a normal service.

A lapdog manager last week posted a picture of an office that had cleared all its work, implying that it had been done on a strike day. Unfortunately for them, the picture’s data showed it had been taken in 2018.

Another tactic is to bring in agency workers. Bosses are keen to use to the fullest the most recent anti-union law that freed up companies to use as many agency scabs as they want. But this too can be beaten.

In Sheffield a mass picket, including firefighters who had come in solidarity, blocked agency workers last week. And a video of an agency worker refusing to scab also boosted people. An agency had told Bryn Atkinson, who has been involved in the city’s courier strikes, that he was covering “holiday leave”. When he saw the picket line he refused to cross. And he is far from the only example.

But Royal Mail’s main hope is that the union will not move to all-out. Instead it has called strikes, but not enough to force the issue. It has called off action for talks that led nowhere except to more attacks. Management wants to get past Christmas and then grind down the workforce. Suspensions, minimal scabbing, agency workers—none of these will win if there is an all-out strike.

Donate to the CWU solidarity fund here bit.ly/CWUsupport Do you know of examples of Royal Mail suspensions or sackings? Email us at reports@socialistworker.co.uk or on our social media. You can remain anonymous if necessary.

To fully understand the battle at Royal Mail you have to follow the money. And the background shows that it’s much more than the stubbornness and greed of Simon Thompson that’s behind the dispute.

International Distributions Services (IDS) is the overall company that owns Royal Mail. Its bosses say Royal Mail is loss-making and faces declining post volumes. It has yet to explain how this means it can afford Simon Thompson’s £753,000 last year, including a bonus of £142,000. Or how it could have paid £2 billion in dividends since 2013.

Their solution to Royal Mail’s problems begins with 10,000 redundancies—the union says it will eventually be 20,000—and axing Saturday deliveries. Most importantly it means “Uberisation”, driving down the conditions of postal workers to those imposed in the gig economy and competitor parcel firms.

These are places where bosses rule without having to worry about a union. And the Royal Mail strategy therefore inevitably involves breaking the CWU or reducing its reps to tame collaborators.  That could boost the profits of Royal Mail. But there’s another crucial element.

If you’re a profit-hungry boss or a vulture financier, you don’t start from worrying about Royal Mail as a public service. You think about asset-stripping and dividing up the company to unlock super-profits.

The other bit of IDS is called General Logistics Systems (GLS). It collects, sorts and delivers parcels in large parts of Europe and North America. Last year it transported 870 million parcels and grabbed a total revenue of over £4.25 billion. It has already been a winner in the race to the bottom of workers’ rights.

One of its former workers in California wrote, “GLS cares for no one, only saving a few pennies. Warehouse is always understaffed because workers are only guaranteed 3-5 hours daily.”

That sounds great to bosses. The Financial Times newspaper says that GLS is worth at least as much on its own as the whole group’s value of £3.3 billion. “An increasing shareholding by acquisitive billionaire Daniel Kretinsky, with over a fifth of the shares, testifies to the break-up value,” says the paper.

Bosses would like to plunder Royal Mail’s parcels business and reduce workers to GLS pay and terms. It is another reason to fight to win the strike—and to demand renationalisation of the whole postal network.