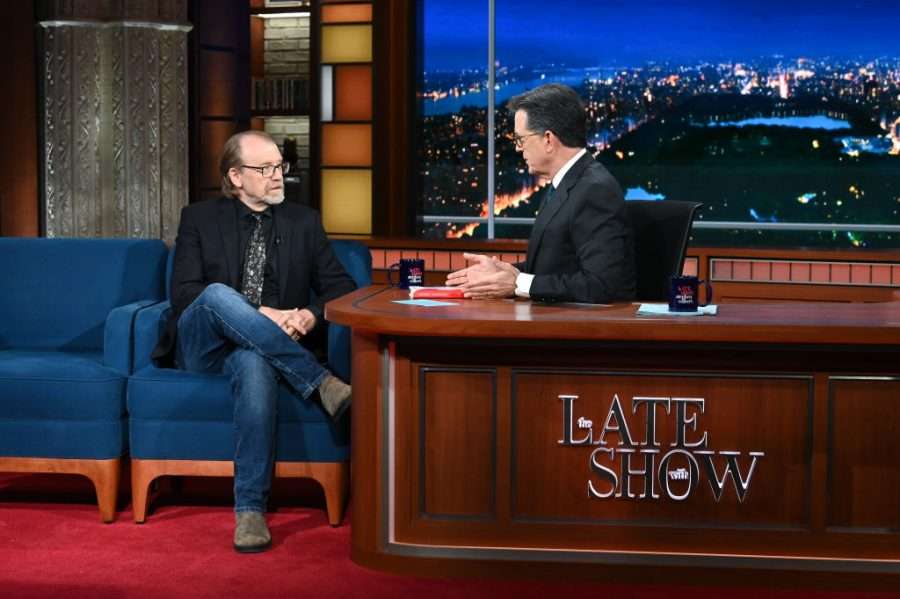 George Saunders may be one of America’s most lauded fiction writers, but when he turns his pen to the phenomenon of Donald Trump and his supporters, he reveals the limits of his political understanding — and produces some of his worst stories in the process.

“I don’t think that the current mess we’re in is separate from the fact that we’ve allowed the artistic mode of thought to degrade,” said George Saunders in early 2017, shortly after the inauguration of Donald Trump. Speaking at a bookstore in Washington, DC, Saunders sought to defend artistic thought by reading a poem that he had written about the president, “Trump L’Oeil”:

Has taken up the reins,

And unmoved by others’ pains.

It continued like this for another sixteen stanzas, rhyming “flailing man” and “Kellyannes,” “pursuit” and “Brioni suit.” At the end, Saunders urged his audience to action:

And each of us must now become

Saunders is one of America’s most decorated writers — a recipient of a “genius grant” from the MacArthur Foundation, and winner of the 2017 Booker Prize for his novel Lincoln in the Bardo. From the pages of the New Yorker, Saunders represents and shapes elite liberal opinion: Stephen Colbert and Vox founder and New York Times columnist Ezra Klein have called him “America’s greatest living writer.” In his recent work, Saunders has often targeted Trump: “I’m excited,” he said in 2017, “by the idea that writers like us can actually reach out and try to understand and prod and agitate the people who are in support of Trump, because we have the tools to do it. We’re language people and we’re idea people.”

But like his poem, Saunders’s other writings about Trump — including a long essay in the New Yorker and several of the stories in his recently published collection, Liberation Day — misfire. As Trump launches his third campaign, Saunders’s work exemplifies a common strain of anti-Trumpism. Ardent in its defense of American liberalism, it fails to understand what the former president reveals about the nation.

In 2016, Saunders covered several Trump rallies for the New Yorker. “The Trump supporters I spoke with,” he writes, “were friendly, generous with their time, flattered to be asked their opinion, willing to give it, even when they knew I was a liberal writer likely to throw them under the bus.” But beneath this friendly surface is a “barely suppressed rage.” “I’m out here with two friends, Smith and Wesson,” says one gun-carrying Trump supporter. Two others threaten to shoot a protestor in the back of the head. The rally-goers have many grievances — Black Lives Matter, Obamacare, socialism, and, above all, immigrants. “I’m seeing them getting cash, getting their bills paid,” one rally-goer complains, “and, as a taxpaying citizen, I don’t get anything.” Another Trump supporter warns Saunders about the “thousands of Cubans coming in” and predicts that America will soon be “like India,” with “sewage running in the streets.”

Saunders identifies enormous anger and resentment among Trump supporters, but struggles to reconcile it with his “notions about the essential goodness of the nation.” Watching a Trump supporter argue with a protestor, he thinks that their conflict is unreal: “I know (or feel I know) that, on another day, these two guys might have grabbed a beer together, jump-started each other’s cars, whatever — but they’re not doing that today.” The argument threatens to violate what Saunders (quoting Norman Mailer) takes as the “premise” of American democracy: “there is more good than bad in the sum of us and our workings.”

By the end of the essay, the conflict has gone beyond argument. After a rally in San Jose, Saunders witnesses a brawl between Trump supporters and protestors. Eventually, the police arrive, with riot gear and a helicopter, and kettle the protestors. “The night was sad,” Saunders says. “The center failed to hold.” He admonishes the protestors, disappointed that they too have been infected with anger: “Their disdain for Trump morphed too easily into disrespect for the police . . . This, Mr. Trump, I thought, is why we practice civility. This is why, before we say exactly what is on our minds, we run it past ourselves, to see if it makes sense, is true, is fair, has a flavor of kindness.”

How does an essentially good nation devolve into such bitter conflict? Saunders sees Trump himself as the primary cause: “Where is all this anger coming from?” he asks. “It’s viral, and Trump is Typhoid Mary.” He compares Trump to an arsonist: “LeftLand and RightLand are housemates who are no longer on speaking terms. And then the house is set on fire. By Donald Trump. Good people from both subnations gape at one another through the smoke.” As these metaphors make clear, for Saunders, Trump is an outlier, a pathology. The problem isn’t with America itself, but something outside it. Intent on preserving his belief in the nation, Saunders is left to see Trump as a foreign intruder — “a seventeenth-century Austrian prince time-transported here to mess with us.”

A similar thinking animates Saunders’s fiction, especially those stories that deal with politics. This is typified by “Love Letter,” one of the Trump-inspired stories in Liberation Day. Set in the late 2020s, “Love Letter” takes place in a dystopian version of the United States, in which a “comically thuggish” president has installed a regime of “loyalists” and turned elections into “a total sham.” The story’s narrator is a grandfather writing to his dissident grandson, urging him to consider the ethics of violent resistance. The grandfather pines for the old America, which he calls a “profound gift” of “consensus and mutual understanding”; the love letter of the title is ultimately to the nation itself. In an interview with the New Yorker about the story, Saunders aligns himself with the grandfather: “What it did to me, as I wrote it, was make me feel fond of the way of life we’ve enjoyed all these years.”

Viewing America as a “profound gift” leaves the grandfather baffled by the rise of the Trump-figure. “It did not seem,” the grandfather says, “that someone so clownish could disrupt something so noble and time-tested and seemingly strong.” The grandfather believes in the goodness of America, so he can’t understand how it could produce a Trump. He falls back, then, on the logic of invasion, comparing the president to “a guy [who] comes into a dinner party, takes a dump on the rug in the living room.” Placing the Trump-figure outside the party — an intruder — preserves the integrity of the party itself: the president is not a symptom of a deeper problem, but a party crasher shitting on the rug.

This logic leads Saunders to some strange conclusions. Throughout the New Yorker essay, for example, he insists that Trump supporters don’t really support Trump. While noting that there are “bigots,” “wackos,” and “dummies” among the rallygoers, Saunders characterizes the “important constituency” of Trump’s supporters as more innocent: those “who are not finding in Trump a suitable vessel for their hate but are misunderstanding or overestimating him.” If America is essentially good, and Trump is bad, then Americans who support Trump must simply be confused. “I didn’t meet many people who were unreservedly for Trump,” writes Saunders about a Trump rally.

A similar kind of denial appears in “Elliot Spencer,” another of the Trump-inspired stories in Liberation Day. The story follows 89, an elderly homeless man who has had his mind wiped and “reprogrammed” with simplistic talking points. 89 and others like him are hauled by a shadowy right-wing group to political rallies, where they holler expletives at protestors for the cameras. In an interview with the New Yorker, Saunders says the story was inspired by an Arizona Trump rally, where he saw two men “bellowing at each other, both using stock phrases that they seemed to have picked up from their respective TV networks.” “Elliott Spencer” translates this kind of media consumption into literal brainwashing. But it’s a reductive metaphor: if the shouting rallygoers are brainwashed, then they don’t really mean what they say.

The political weakness of these Trump-inspired stories comes with artistic problems too. Saunders can create compelling high-concept fiction (his most famous story involves gang warfare, a Civil War-themed amusement park, and a ghost), but the dystopia of “Love Letter” is thinly sketched. The dystopian president is clearly Trump, but the story doesn’t capture any of the grotesqueness of Trump’s America. “It feels,” writes a reviewer in the New York Times, “as if the setup and the characters interest Saunders less than the opportunity to wallow in moral conundrums and impasses of conscience.”

Likewise, the premise of “Elliott Spencer” is flimsy. At the climax of the story, a journalist uncovers the truth about the reprogrammed homeless people, but it’s not clear why anyone found them plausible in the first place, since they can only yell the same four-word insult — “BastardTurdCreepIdiot” — over and over. The brainwashing plot oversimplifies Trumpism, but it also fails as a plot. Worse, the story is narrated in 89’s babyish patter: “Lights in my face. Blink blink. Lady gives me look of love.” This goes on for twenty-nine pages. Saunders may be correct about the relationship between political and artistic degradation, but his stories, like his poem, are examples of the problem rather than antidotes to it.

Ultimately, this is the problem with Saunders’s narrative of Trump as an invader corrupting an essentially good nation: it casts Trump as an aberration, and so refuses to see the larger political forces that produce him — the diseased ideologies and structures of America itself. In the New Yorker essay, Saunders bemoans Trump’s “muddy understanding of certain American principles,” such as the illegality of torture. This is an important principle, of course, but it isn’t an American one, as the prisoners at Guantanamo and Abu Ghraib can attest. John Yoo, the author of the Bush administration’s memos on the legality of torture, isn’t in jail: he teaches law at Berkeley. To set Trump against “American principles” is to miss just how American he is.

The alternative, then, is to understand Trump as a part of a malignant system — not an invading bacteria (as in Saunders’s typhoid metaphor), but a painful symptom of a widespread cancer. “For a Marxist,” as Slavoj Žižek says, “. . .the pathological (deviating misbehavior of some elements) is the symptom of the normal, an indicator of what is wrong in the very structure that is threatened with ‘pathological’ outbursts.” This kind of structural critique, however, is incompatible with faith in the essential goodness of the nation.

At the end of the New Yorker essay, Saunders admits that his faith has been shaken. “I’ve never before imagined America as fragile,” he writes, “as an experiment that could, within my very lifetime, fail. But I imagine it that way now.” This is supposed, I think, to be harrowing. But it’s an evasion — the same evasion at the heart of Saunders’s writing about Trump, and much other liberal thinking over the past six years. To imagine that America could fail is a kind of comfort, because it means that America has not yet failed, that there is still a profound gift or essential goodness that can be saved from the grubby orange intruder. A better art might puncture these illusions and imagine something more difficult and genuinely harrowing: that Trump’s angry and bloated face is not the perversion of America, but one of its truest expressions.