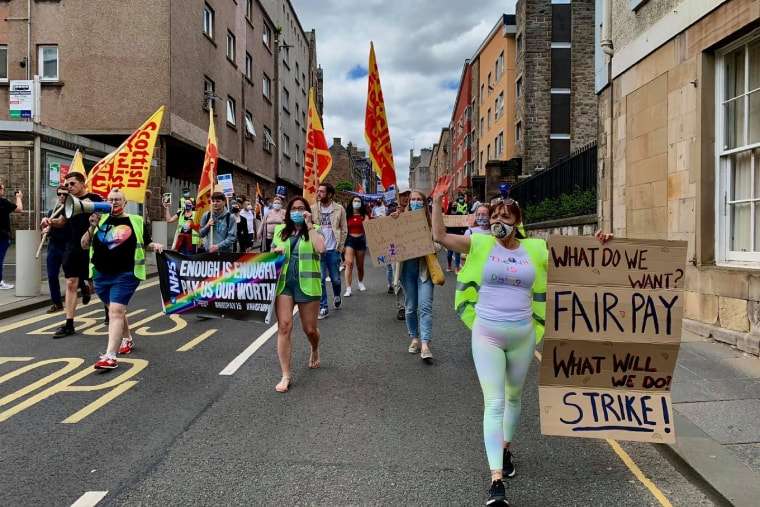 In an appalling dereliction of duty, the leaders of the biggest health service union last week abandoned the pay fight in Scotland.

The Unison union is recommending members accept a revised offer from the Scottish government. It will further drive down low paid workers’ wages and severely cut the pay of some of the most qualified.

That’s despite Unison members having rejected a deal substantially the same for most grades just a few weeks ago.

Wilma Brown, chair of Unison Scotland’s health committee, said, “We have decided to recommend this offer to our members. We believe it’s the best that can be achieved through negotiations. It will go some way to helping NHS members with the cost-of-living crisis.”

Brown makes no mention of Unison’s strike ballot, which the union rapidly suspended as soon as an offer came in. So much for their talk of being a “member-led union”.

The Unite union is consulting its members without a recommendation—knowing that a lack of leadership often leads to acceptance.

The GMB union is urging its members to reject the offer. But it has nevertheless stopped a planned strike by ambulance workers which was due to begin on Monday.

The nurses’ RCN and the midwives’ RCM unions currently remain on the Scottish battlefield. Their members have also voted for strikes. But union leaders there have put off any announcement of strike dates while they informally consult on the new offer.

Nursing grades come out worst under the government’s proposal. A band five nurse, with many years of experience, will see a rise of just 7.4 percent. That’s bad enough but a highly skilled specialist nurse in band seven can expect just 6 percent or less. The RPI measure of inflation is now 14.2 percent.

“Everyone in my team, regardless of which union they’re in, thinks the new offer is a joke,” Pauline told Socialist Worker. She is a mental health nurse and RCN member from the west of Scotland,

“We are all in favour of raising pay for the lowest bands,” she said. “But the deal now means there is no financial incentive to become a qualified nurse. The pay difference between an unqualified band four nursing assistant and a band five qualified nurse is now just 10 pence an hour.

“But not only have qualified nurses done a three-year degree, they are often in charge of a whole ward. If anything goes wrong they can be held legally responsible and may have to fight to maintain their professional registration.”

The RCN’s claim is for inflation plus 5 percent, with the extra as a contribution to catching up on years of below-inflation pay rises.

The new offer falls so far short of that claim that the RCN should not feel the need to ask the members what they think.

Earlier this month, RCN members voted by almost 90 percent in favour of strikes in most areas the union balloted.

The union must take that as an indication of the strength of feeling and this week name the days for the first strikes.

“If we don’t get the legal notice in very soon we’ll miss the chance of coming out on strike with nurses across the rest of Britain. They have announced 15 and 20 December as their first strike dates,” said Pauline.

Moreover, the RCN should challenge the deal’s defenders that tout it as a victory for the lowest paid in the NHS. Even a long-standing but poorly paid band three health care assistant—today on around £23,000—will only get a 9.3 percent rise. That means Unison leaders are selling all their members a substantial pay cut.

This deal will do nothing to help fill the almost 4,500 vacant nursing posts across Scotland. Nor will it do anything to help the battered morale of workers that have been continually stretched beyond their limits.

And patient safety, which is now routinely put at risk because of understaffed wards, will continue to deteriorate. That’s why all health workers, regardless of pay band or union, should vote no in consultations on the new offer. And they should demand that strike ballots and strikes are reinstated.